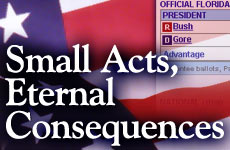 The razor-close U.S. elections prove that no act, however small, goes unnoticed in the grand eternal plan.

2.9 million votes in Florida for Bush, and 2.9 million for Gore. The counting continues and the world awaits.

Imagine it all coming down to one vote.

The Talmud (Kiddushin 40b) says:

A person should always perceive himself as though he were half-guilty and half-meritorious. Therefore if he performs one mitzvah, it tips the scales toward the side of merit. If he commits a single transgression, the scales tip to the side of guilt.

Every action we do has independent value and worth. Of course, there is the overall picture. But in essence, our lives consist of a series of small, individual acts. At any one moment, a person chooses either the right thing or the wrong thing. Thus at that particular moment -- isolated -- the person is either a righteous tzaddik or a wicked rasha.

The sum total of all those individual moments is what makes the "complete person."

We can plan for the future, and reflect on the past. The only moment that truly matters is "now."

The Torah tells the story of Yishmael, the son of Abraham, who was dying of thirst in the desert. The angels argue against saving the boy, since foreknowledge showed that Yishmael's descendents would afflict the Jewish people at various stages in history.

Nevertheless, God decided to save Yishmael, explaining that He judges only on the basis of present deeds, not according to what will happen in the future, as it says: "God has heeded the cry of the boy according to his present state." (Genesis 21:17)

The moment that matters is now.

Life is a constant series of challenges. Money, honor, and comfort tempt us away from the righteous path. Decisions need to be made, action needs to be taken. Situations can be confusing and consequences can be frightful.

John F. Kennedy wrote "Profiles in Courage," a book about people who stood up in different situations and changed the course of history. Courage is often defined as being scared out of your wits but taking action anyway -- to transcend one's fears. It enables people to speak and take action even when it is difficult. Lack of courage is one of the greatest handicaps a person can have.

So where do we get the strength to overcome, to rise to the moment?

Yehudah Ben Teima said: "Be as bold as a leopard, light as an eagle, swift as a deer, and strong as a lion, to do the will of our Heavenly Father." (Talmud - Avot 5:23)

Yes, we need courage to make decisions. But it is divine guidance that helps us make the right decision.

Our forefather Abraham endured all types of mockery and persecution for holding beliefs that were, to say the least, politically incorrect. Nimrod, as the most powerful world leader of the time, was the one most threatened by Abraham's ideas of a supreme God. So Nimrod threw Abraham into a fiery furnace, saying "Let's see your God save you now." Abraham emerged unscathed.

In fact, the Torah calls him Avraham Ha-Ivri -- Abraham the Hebrew. Ha-Ivri translates as "the one who stands on the other side." The entire world stood on one side, with Abraham standing firm on the other.

God calls the Jews a "stiff-necked people." Being stiff-necked is both good and bad. It is bad because you are stubborn and unwilling to change. But it is good because in the face of fad and trends, you stick to your guns. It is said that if the Jewish people were not stiff-necked, they never would have survived until today.

The Jewish formula for success? Keep your eye on the ball. Stick with what you know is right. And ask the Almighty to help.

Why did Jacob bury Rachel alongside the road in Bethlehem, and not in Hebron like the other matriarchs? Because Jacob foresaw that in the future the Jews would pass by Bethlehem on the way to being exiled -- and he wanted Rachel to feel their anguish and pray.

It happened 1,000 years later that the Jews put an idol into the Holy Temple, and God sought to destroy the Temple forever. The souls of each of the patriarchs and matriarchs pleaded to God to spare the Jews from permanent exile. In exchange for God’s promise, they offered all their merits: their faith, their devotion and their self-sacrifice.

Abraham tried to prevail over God in the merit of having brought monotheism to the world. But God said that would not suffice. Isaac pleaded with God in the merit of his willingness to be sacrificed on Mount Moriah. But that too was rejected as insufficient. Jacob, Moses, King David and others presented their merits. But none would suffice.

Rachel's soul then presented itself before God. "Master of the Universe," she began, "I waited seven years to marry my beloved Jacob. When the time of the wedding finally arrived, my father schemed to switch me with Leah. I realized that she would be put to shame if the scheme were uncovered, so I had compassion and gave her the password. I overcame my own feelings and was not jealous. I allowed a competitor into my home. So if I was able to do it, God, then all the more so You too should not be exacting of the idol -- the competitor in Your home."

Immediately, God's compassion was aroused. He said, "Do not cry over the exile, Rachel, because for your sake I will return the children of Israel in the future to their homeland once again." (Jeremiah, chapter 31)

CHANGING THE COURSE OF HISTORY

Typically only the "big" achievements get attention. World leaders, movie stars and business tycoons are splashed on magazine covers and glorified as symbols of power and influence.

But if you ask 100 people, "Who was the greatest influence in your life?" chances are none will mention an Olympic gold medallist or the chairman of Microsoft. Rather, parents and teachers have molded and shaped who we are. Not because of any dramatic, life-changing discoveries. But because they demonstrated care and compassion, day in and day out. And this is the lesson God is teaching us by accepting Rachel's prayer above all the others.

Rashi comments on the Talmud (Kiddush 40b):

Each act we perform has eternal consequence not only for ourselves, but for the entire world. As the Talmud says: "Everything is foreseen, yet the freedom of choice is given. The world is judged with goodness, and everything depends on the abundance of good deeds." (Avot 3:19)

... Or at least you can cast the deciding vote for President of the United States.

Dedicated to the memory of Shahar Vakrat, a 20-year-old Israeli soldier killed by Palestinian snipers on November 10, 2000, while defending the Jewish right to pray at Rachel's tomb.

Israel Is Just a Dream

How Coronavirus is Upending Orthodox Jewish Traditions
The Promise Of The Land
Which Chat Are You On?: Parshas Behar/Lag Ba’Omer
Do You Like Slow-Cooked Food? Thank the Jews
Comments
MOST POPULAR IN Jewish Society
Our privacy policy