The Grapes of Joy 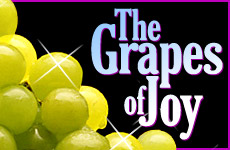 There's more going on than just gardening when working the land of Israel. My harvest this year included some very unexpected fruits...

My garden in Jerusalem is small by American standards, but a lot can be packed into a little space. I even have a few fruit trees, including some of the special fruits of Israel.

My wife especially wanted to have a "fig and vine" to sit under, our personal fulfillment of the Biblical prophecy that the Jews would return to the land of Israel and "each man will sit under his vine and under his fig tree." (Micah 4:4)

We marveled that we were actually here in Israel, living a dream of generations past.

Emotions ran high when we planted our vines, watched them grow, and sat in their shade. We marveled that, after so many centuries, we were actually here in Israel, living something that was only a distant dream to the generations before us.

It was with great anticipation that I waited the years until I could finally harvest the fruit -- bring in my crop, separate tithes, and actually eat from the fruits of this land that I had tended. That amounted to a good size bowl of grapes each year.

No, it was not going to substantially reduce my food bill. But the worth of our harvest was far more than its economic value and we doled them out to the children and savored each precious grape.

However, this year was different. Israel is in the midst of a water shortage, and plants like the fig and grape were left to fend for themselves all summer long. (They are quite drought resistant.) That is, until a pipe in the building next door sprang a leak. The slow seep through the garden wall made the whole area under the grapes a muddy swamp. Unpleasant for humans, but a festive treat for the plants.

Harvest time came and I filled one shopping bag after another with the grapes. By the time I had finished, the patio was covered with bags of grapes. Not only was the quantity great, but also the size and flavor were way beyond the typical harvest.

I had at least three times my usual crop when I suddenly realized: This is the year before the Sabbatical Year, Shmitah!

Shmitah, as explained in the Book of Leviticus (Chapter 25) is a rest for the land of Israel. Agricultural work ceases for an entire year. No fields are planted nor harvested. Trees are not pruned or fertilized. The whole land has a year off, and whatever grows on its own is considered ownerless and free for anyone to take.

This is a startling concept when you realize that ancient Israel was an agrarian society. How could anyone come in and tell a nation of farmers not to do agricultural work for an entire year. How would they survive? What would they eat?

This concern is explicit in the Torah:

"If you ask, what will we eat in the seventh year? We have not planted, nor have we harvested crops?" (Leviticus 25:20)

Valid question! The answer follows in the next verse:

"I will direct My blessing to you in the sixth year and [the land] will produce enough crop for three years."

The author of the Bible guarantees that in the sixth year a miracle will provide livelihood for the Sabbatical year.

Who would write a guarantee that is impossible to keep into a book that was intended as a practical guide for living? A triple crop is clearly not something any person is capable of delivering, so why write it? What human being can come through with such a promise? How long would a religion that made such a promise last? Seven years!

Who would write a guarantee that is impossible to keep?

Only an author who thinks he can control nature would write a line that promises a miracle.

The agricultural aspects of the Torah apply in their full strength when the majority of Jews are living on their land. The population of Israel does not yet include more than 50% of the world's Jews. Dynamics are shifting and the demographics show it is only a matter of a few years before Israel includes the majority of world Jewry. Until then, we still keep the Sabbatical year, with all of its details and sanctity, on a rabbinic level.

My little piece of the Land of Israel will rest this coming year. I will not prune, fertilize, plant, nor do any watering other than what is needed to prevent permanent damage to the plants. I will walk among the plants and watch the choreography of the seasons, as the plants go through their cycle without any help from me. It is a time to observe the garden rather than participate in it. It is a time to think and ponder and, hopefully, this year I will be the one who grows.

I look at the bags bulging with my sweet harvest, thanks to the exquisite timing of my neighbor's burst pipe, and I can't help but smile at the personal blessing God has sent me right before the Sabbatical Year.

Shmitah begins this Rosh Hashanah, and I am very much looking forward to a restful Sabbath of the Land. I will open the garden gate and let the fruit of the trees be ownerless for all to come and take. All who come can partake in the bounty of my garden this year. I anticipate the joy of sharing to be the greater pleasure.

The pleasure of tasting my fruits begins to fade in a moment, but when others come into the garden and partake of the fruits, the unity and closeness and elevation it produces can last an eternity.

Rabbi Shmuel Silinsky received his BS from Cornell with a major in Communication Arts and a minor in Archeology, and did post-graduate work at UCLA in the field of Desert Plants and Natural History. Prior to moving to Israel, he worked in the field of Urban Ecology including several years as a landscape designer in Beverly Hills. Rabbi Silinsky received rabbinic ordination from Aish HaTorah and the Chief Rabbi of Jerusalem. He currently teaches at the Yeshivat Aish HaTorah in Jerusalem.

One of Us: A Searing Look at Sexual Abuse in the Jewish Community

The Heart-Rending Cry: How to Mourn for Something that Happened 2000 Years Ago

The Courage to be Different
Deep Breaths
What Happened to the Truth?
The Japanese Everything Bagel Spice Recipe
Comments
MOST POPULAR IN Israel
Our privacy policy