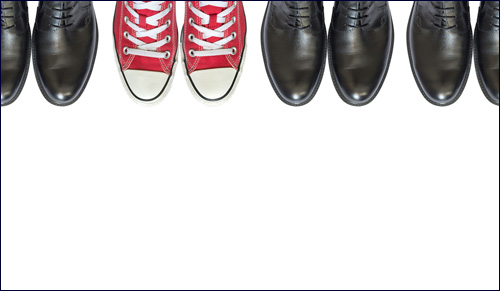 Real learning begins when we leave the echo chamber.

I was heartened to read the letter written by a number of prominent professors from Harvard, Yale and Princeton last week encouraging students to think for themselves.

In the first test that God gives Abraham, He tells him to leave everything behind – his family, his community, his country of birth – and go to the place that the Almighty will show him. Abraham is challenged to achieve independence, to figure out who he is and what he believes, not to be perpetually subject to the groupthink that concerns these professors. God was essentially telling Abraham the same advice as the professors: “Think for yourself.”

It is not a new idea but such an important one and a notion that has gotten lost in the world of micro aggressions and safe spaces. What makes our children so fragile, so unable to cope with different ideas, so threatened by notions opposed to their own? Jean Twenge, the psychology professor from San Diego State University suggests that in a world where most communication is done via smart phone, words matter more and are therefore more frightening and powerful.

I am skeptical of that explanation. Words have always mattered. Words have always been powerful. But, in the United States anyway, we have relied on the market and not the law to regulate them. We have relied on the good will and common sense of the people. This is what seems to be lost and, despite some of my frustrations with what occurs on college campuses today, I don’t blame the students.

It is us. We’re the ones who bear this responsibility. We’re the ones who’ve taught our children to be frightened of the other, who have promoted an “us versus them” mentality, who don’t have enough belief in the power of education and the good will of others. We’re created this atmosphere of mistrust and intolerance and we need to fix it.

If we want our children to get both a good college education along with good preparation for life we need to teach them how to accept and understand people and ideas that are different, even opposed to theirs. We don’t have to believe the ideas but we need to understand them and the people who espouse them.

Instead of feeling threatened by new ideas, we need to teach our children to be excited.

A world of love and tolerance is not built by surrounding us only with people who think the way we do, the “echo chamber” that the professors refer to. It is created when we sit in dialogue with those who ideas radically differ from ours and we listen with patience, calm, attentiveness, reason and understanding. Our politicians need to learn this. Our teachers need to learn this. We all need to learn this.

If we surround ourselves with only people like ourselves we are the ones who lose. We lose the opportunity to be enriched by the knowledge, wisdom and experience of others. And our children lose – because they have no tools to cope with and/or evaluate original or different ideas.

If people judge us as part of a community and not as individuals, we frequently get offended. We should be wary of doing the same. Start reading newspapers you disagree with and open yourself up to learning something you didn’t know. Start having coffee with individuals from the “other” party and be prepared to be surprised when you discover the similarities between the two of you or the reasonableness of their position.

12 Business Lessons from the Book of Genesis