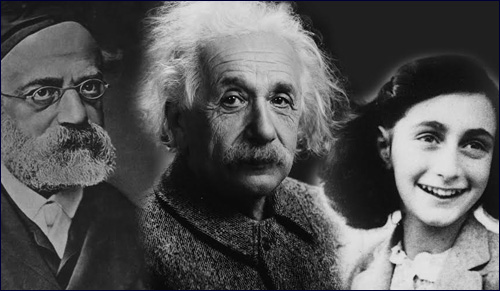 From the Talmud to David Ben Gurion, a collection of meaningful Jewish quotes.

The words spoken and actions made each day of our life have formed us into the person we are today. And by making good choices today and tomorrow we gradually form ourselves into the best person that we can be. - Chaim Vegoda

2. It was said of Reb Simcha Bunem of Pershyscha that he carried two slips of paper, one in each pocket. On one he wrote: Bishvili nivra ha-olam “for my sake the world was created.” On the other he wrote: “V’anokhi afar v’efer” “I am but dust and ashes.” Reb Simcha would take out each slip of paper as necessary, as a reminder to himself.

The balance of ego is a huge challenge for us as humans and especially for someone who lives in the public sphere as I do. This quote reminds me that to live in tension is a natural state. And to always be both humble and simultaneously believe in the infinite power God placed in each of our souls: the power to change the world. – Mayim Bialik

It's not only the out-of-the-ordinary things that are miraculous. Everything about us – the very existence of the world itself – is an awesome miracle that should inspire us to thank and praise the Creator. - Yvette Miller

4. “A Jew who doesn’t believe in miracles is not a realist.” – David Ben Gurion

For better or for worse Jewish history violates all the laws of history. What would be supernatural for any other people is natural and normal for the Jewish people. No Las Vegas bookie would give a million-to-one odds that the events predicted in the Torah would actually come true or that the Jewish people would outlast the greatest empires, reestablish their state and prosper. The improbable events of the past are a clear indication of God’s hand in Jewish history and destiny. - Rabbi Ken Spiro

Even the seemingly insignificant act is significant when it is part of many cumulative acts. Great people aren’t made from one great action; rather they become great via consistently good “small acts.” - Rabbi Yaakov Meyer

6. “A person should be willing to give up all his tomorrows for one today, so that he doesn't end up wasting all his todays on one tomorrow.” –The Alter of Novardik

All too often we worry about so much about the future that we forget that what really matters is the choices that we make today. - Jonny Roodyn

7. “You marry your homework." - Adrienne Gold

I love this line and quote it often. It reframes the challenges of marriage as God's opportunities for you to grow. It means that this person was sent to you from Heaven to help you realize your potential. I follow up and say, "You thought you were a good person before you got married. Then you got married and your spouse told you, 'You could be better.' " - Lori Palatnik

All of life is a miracle – and we are not truly alive unless we grasp the miracle of our being. Three times a day Jews give thanks in our prayers for "Your miracles which are with us every day." Recognizing God's involvement in every aspect of our lives and acknowledging His benevolence in His blessings to us adds enormous meaning to life.

It took me a long time to grasp that the word miracle does not simply refer to the splitting of the sea or the sun standing still; it has far greater meaning as the measuring tool of our lives and the awesomeness of every part of our existence which we far too much take for granted. That’s why I don't merely believe in miracles – I live them every moment of my life. - Rabbi Benjamin Blech

9. “When we are no longer able to change a situation, we are challenged to change ourselves.” – Viktor Frankl

In every situation in life, we can choose how to respond to our circumstances and through that choice, moment by moment, we grow and transform ourselves. - Sara Debbie Gutfreund

10. "It is not incumbent on you to finish the task, but neither are you free to absolve yourself from it." – Ethics of the Fathers, 2:21

God doesn't ask us to make things happen; He only expects us to put in our maximum effort and try our best, then He promises to take us the rest of the way. - Danielle Haas

11. "Life is like riding a bicycle: to keep your balance you must keep moving." – Albert Einstein

Even if one doesn't see success, don't be disheartened and stop moving forward. Keeping peddling and you will get there. - David Rabinowitz

12. “Pain is a reality, suffering is a choice.” – Rabbi Asher Resnick

Pain, whether it’s physical or emotional, hurts but it is our choices that shape how it will affect our lives. - Tuvia Levin

13. “I am not a Jew with trembling knees. I am a proud Jew with 3,700 years of civilized history. Nobody came to our aid when we were dying in the gas chambers and ovens. Nobody came to our aid when we were striving to create our country. We paid for it. We fought for it. We died for it. We will stand by our principles. We will defend them. And, when necessary, we will die for them again, with or without your aid.” – Israeli Prime Minister Menachem Begin to Senator Joe Biden, in June 1982, who threatened to cut off US aid to Israel

Menachem Begin communicated strength, pride and conviction. He was a proud Jew who knew that he had an incredible history and spiritual heritage behind him and consistently drew strength from that. - Josh Pittleman

So many of the actions we or our leaders take seem good in the moment but have many unforeseen and disastrous long-term or unintended consequences. Leadership demands that we try to examine the future consequences of the behaviors we prescribe before taking action. - Emuna Braverman

We’re all given different sets of life circumstances and one basic choice: Will we take those circumstances and build with them or not? Some people have tremendous wealth yet don’t seem fulfilled. And we’ve met people who don’t have much yet feel they are achieving their dreams. It is not how much or how little we have, but how we utilize our resources that determines our life experiences. - Rabbi Yaakov Cohen

Our biggest fear in life should be whether or not we are living up to our potential. - Ephraim Shore

My mother, Rebbetzin Esther Jungreis, of blessed memory, quoted this every time she spoke. We don’t need to look at self-help books, search the world for new thoughts on living life. Every challenge, every experience, every life solution can be found in the pages of the Torah. - Slovie Jungries Wolff

18. In reply to Albert Einstein’s quote, “God doesn't play dice with the universe,” Niels Bohr said, “Einstein, don't tell God what to do.”

Albert Einstein was a classical physicist and believed that the universe operated in a set of fundamental theories which describes nature. Niels Bohr was one of the early and greatest quantum physicists who believe that there are limits to the precision with which quantities can be known.

Bohr thought that this does not seem to be the way the world works. Chance may play a role. But he understood that it’s absurd to think that one could know God’s mind. - Ben Rothke

19. “For if you remain silent at this time, relief and rescue will arise for the Jews from elsewhere, and you and your father's household will perish; And who knows but that you have come to the kingdom for such a time as this and for this very occasion?" – Book of Esther, 4:14

When Mordechai reaches out to Esther and says that she has to go step up for the Jewish people, she refuses, thinking that she can’t do it. He responds by telling her that you were built for this moment. “Who knows if for this very moment you’ve become royalty.”

God throws all of us challenges and sometimes we don’t think we have enough power, resources, patience, or strength to go through it. But during those difficult moments, God is saying to us is: who knows if for this reason you became who you are. You became the professional you are, the mother you are, the doctor you are, the rabbi you are, the person you are. God is always preparing us for the challenge ahead. Whenever we reach that point when we think we don’t have it in us, maybe it’s for that moment that we’ve been created. - Charlie Harary

Empowered by Our Power Outage