A Sukkah in Kuwait 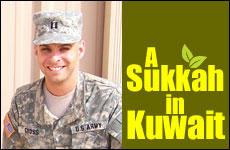 Like the Jews in the desert, Capt. Jonathon Gross built a sukkah in the middle of nowhere.

Of all the places in the world to first learn how to build a Sukkah, Jonathan Gross did so in the most unlikely of places: the barren desert of Kuwait. Even though he was miles from any other Jew and lacked standard building supplies, he was able to build a kosher sukkah that lasted him for the entire holiday.

Jonathan grew up in a Conservative Jewish home in Queens, New York. He attended college at SUNY-Binghamton and then law school at Hofstra University. In June 2004 he joined the U.S. Army as a legal expert. He entered with the rank of First Lieutenant and was assigned to the 101st Airborne Division (Air Assault). He was later promoted to Captain, and was sent on two tours of duty to Iraq and was involved in many legal missions involving prisoners, Iraqi courts and other issues. While he was not an infantryman, he had taken combat training and experienced his share of ambushes, bombings and gunfights. He also saw many miracles up close.

When he first joined the Army he was stationed at Fort Campbell, located on the Tennessee-Kentucky border. There he helped soldiers and units with legal problems before deployment. The base lacked a regular Jewish chaplain and with Rosh Hashana approaching, Jonathan realized that no Jewish services were planned and he would be all alone. Jonathan called a friend of his from college who at the time was in law school at Emory University in Atlanta, Georgia. The friend was going to the nearby synagogue Congregation Beth Jacob, and invited Jonathan to come along.

The day after Yom Kippur in 2006, Jonathan was deployed to the Middle East. He was sent first to Kuwait and then into Iraq. He tour of duty would last until the following September. The Beth Jacob community continued to look out for him during his deployment. Families in Atlanta stayed in touch with him and sent him care packages.

Jonathan arrived in Kuwait just before Sukkot, and immediately tried to find if a Sukkah would be available on his military base. He quickly found out that the base had no Jewish chaplain, and certainly no sukkah. But encouraged by a friend in Atlanta named Kivi Bernhard, Jonathan set about to make his own. With just days to go, he was at a loss as to where to find the necessary materials in the barren desert.

"Somewhere, from the beginning of time, there was vegetation planted for you to build a sukkah. It's waiting for you."

“I can’t say how it happened. There’s no way to explain it but for the hand of God,” Jonathan said. “I was in a totally remote, desolate area. Kivi encourage me to build a sukkah. He said ‘somewhere, from the beginning of time, there was vegetation planted for you to build a sukkah. It's waiting for you.’”

Military Chaplains are expected to help all soldiers in need, regardless of their religion. So Jonathan reached out to the Christian chaplain on the base to help him build his sukkah. Jonathan described what he was trying to build and the minimum measurements for a Kosher sukkah. The chaplain eagerly helped and found an extra cardboard box and two unused metal poles.

Jonathan still did not know where to find vegetation to place on the top of the sukkah as schach. The chaplain also had no ideas. But that day Jonathan traveled to a rifle range 45 minutes away from the base. When he arrived he found a small dried-out bush growing there, just waiting for him to arrive. So Jonathan pulled it out of the ground and brought it back with him to his base. He and the chaplain erected the cardboard box and poles and Jonathan placed the bush on top.

The sukkah stood the entire week, surviving even huge sandstorms that knocked down tents and other more permanent structures on the base. Each day Jonathan sat in his sukkah to eat his meals and pray in peace. Finally on the last day of the holiday as he was leaving the sukkah, his uniform got caught on one of the bush’s branches and the whole sukkah fell down.

Jonathan witnessed the Hand of God many other times during his deployment. He even found a minyan on his father’s yahrzheit to allow him to say Kaddish, one of only two minyamin he found during his year tour.

Jonathan returned to Iraq for a second tour of duty, from October 2007 to November 2008. During this year he experienced many other miracles, some which saved his life and others which enabled him to keep mitzvot while he was deployed. During his second deployment Jonathan was stationed on a large base in Baghdad which had an observant Jewish Chaplain during his entire deployment. On the base there was also ample kosher food and services on Shabbat and Holidays.

Jonathan did not have to build another makeshift sukkah that year, because a total of three sukkot were assembled on the base. Thus in the least expected place, Jonathan found the resources to help him continue his religious growth.

Jonathan is still in the Army. He is currently an assistant professor in the law department of the United States Military Academy in West Point, New York. He and his wife live in White Plains.

While a sukkah is supposed to be a temporary structure, this year, as last year, Jonathan will undoubtedly be using more permanent materials for his sukkah than a cardboard box and a bush.

Up Against the Wall: The Remarkable Odyssey of Arye Steinberger’s Sukkah Art

One Big Family
The 21st President of the United States: Failure or Inspiration?
Hiding Their Jewishness
The Jewish Pope: Following the Questions Home
Comments