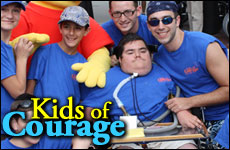 Inspiring models of taking risks and pushing through limitations.

The 130 children and young adults with whom I spent a few days share two things. They are all Jewish, and they all contend daily with serious and debilitating illness. Many of them have done so all of their lives. You would think that this might provide the ultimate mussar (personal growth) ride for Elul, an in-your-face confrontation with your own mortality, and the need to be grateful to God for life itself and the parts of it we take for granted.

You might think so, but you would be wrong. It’s not the ultimate ride at all. It may be the teeter-totter compared to the Montezuma’s Revenge of lessons you can garner from these kids.

In the three years that he was supposed to be sitting in classrooms at Cardozo Law School, my son Ari – together with some valiant and dedicated partners – built up Kids of Courage, by offering gradually larger and more exciting programs for young people who face challenges you don’t want to know about. They include the Jewish genetic diseases, as well as the alphabet soup of development gone awry – CP, MD, CR, etc. And of course, various cancers. Some conditions are so rare they have no names and no medical literature.

The sight of 100 kids, many in wheelchairs hooked up to elaborate apparatus, but all smothered with love by their volunteer counselors is overwhelming.

Armies are never better than their supply lines. When Kids of Courage moves, two lines move out with them, offering complex medical as well as logistical support. The sight of over a hundred kids, many in wheelchairs hooked up to elaborate apparatus, but all smothered with attention and love by their volunteer counselors (everyone – with the sole exception of a sole part-time secretary – in Kids of Courage is a volunteer) overwhelms the adults who meet up with them.

An entire Continental jet couldn’t contain them all on the flight from Newark to Los Angeles. Illusionist David Blaine turned up for the ride, and entertained en route. Nothing thereafter could contain their enthusiasm, or limit the Kiddush Hashem (sanctification of God's Name) they made. Katie Couric sent a video crew, and CBS will be doing a segment on them. MLB will be running clips about them for two weeks, taken from their appearance at an Angels game.

Returning from that game, the kids were taken, unannounced, to the block of Mann’s Chinese, where 12 Lamborghinis pulled in behind the buses, and their owners spent three hours hurtling them down Hollywood Boulevard. Tourists, expecting to be entertained by the over-the-top atmosphere of the Hollywood Walk of Fame, were instead enthralled by the sight of three hundred young people, led by identifiably religious counselors, singing and gyrating with a joy that has nothing to do with what is usually celebrated in LaLaLand. They stopped to watch and to photograph, as did the tourist buses. So did a media pool, resulting in clips of the event appearing on television stations across the country.

The Lamborghini owners were so impressed that when their tour of duty ended, they followed the busses to a Beverly Hills home for a barbeque, where Laker legend AC Green presented “Oscars” to the kids, making each one feel like a superstar. (Green was a good choice, and a supermensch. Deeply religious, he spurned the womanizing foisted upon him by his incredulous teammates, arguing that he would wait for marriage.)

This was one day, out of nine. Kids of Courage took them to Disneyland, Knotts, Universal, a water park, Venice Beach, and gave them a beautiful Shabbos with Shloime Daskal.

Wherever they went, they radiated enthusiasm, forcing it inexorably on those who witnessed it.

Those witnesses could easily have missed the real point. They didn’t see the transition. They couldn’t see that some of the kids were apprehensive on Day One, withdrawn, timid, quiet, justifiably locked into their own problems and concerns as surely as their malfunctioning bodies held them captive. They couldn’t see that a day or two or three later, the same kids came alive with spirit and confidence. Disneyland didn’t do that. Carefully thought-through kindness, offered lovingly by counselors and staff after much deliberation and planning, did that, affording them an opportunity to be as fully human as anyone else out there, sometimes for the first time in their lives.

We return to the real Elul lessons of Kids of Courage. I’ve watched the organization grow from a handful of kids sitting around my Shabbos table, brought to Los Angeles by my son. I never quite understood the name. Courage? What kind of courage do you need to sign up for a dream week of visiting amusement parks? Despite what I saw in front of me, I too had missed it all.

She explained what it took to summon up the energy to even attempt a plane flight.

Until Sarah spoke last Thursday. She explained what it took to summon up the energy to even attempt a plane flight. How so many kids had pushed themselves towards other activities that the rest of us take for granted, and how they had failed, and failed again, and yet again. How after failing too many times, you don’t want to risk the disappointment – and the pain – of failing again. How it took, in fact, superhuman courage to try again, plus circumstances that would make it reasonable to try.

Listening to her, it struck me that she was describing Elul. We’ve tried, and tried again, to correct our faults, to make it back to the Almighty big time. After too many failures, we stop trying in earnest, not wanting to risk the disappointment of more failure.

Like the Kids of Courage, there is a soul inside that yearns to express itself, wants to be free of the limitations of our physicality. In our case, God Himself provides the model circumstances to make the trip back – the month of Elul. The real lesson to be taken from these kids is precisely their courage to make the attempt. They are nothing but an inspiration.

We are all on limited, borrowed time. Is there any greater priority for us than to bring joy to as many of our fellow travelers as possible, and in so doing, to bring joy to our Father in Heaven?

Rabbi Yitzchok Adlerstein is director of Interfaith Affairs at the Simon Wiesenthal Center.

The Jews of Italy

The Pope who Printed the Talmud

Media Critique #39 - Classic CNN Bias
It Takes A Lot Of Faith To Be An Atheist
How Instagram Brought Back This Nostalgic Soup
What Makes Eli Run?
Comments
MOST POPULAR IN Israel
Our privacy policy