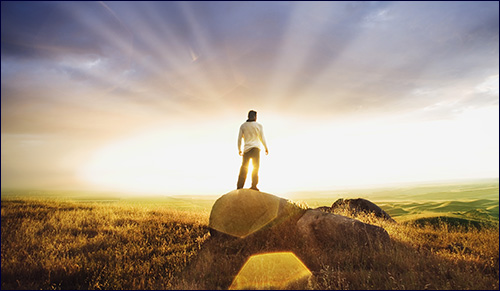 Alan Lock was going blind. Here’s how he fought to get through the darkness.

Alan Lock was slowly going blind. He began his career in the Royal Air Force as a navigation officer and he noticed that towards the ends of his shifts his navigation charts were beginning to look blurry. At first he thought it was just because he was tired, but even after he had slept his eyes continued to ache and shadows began to cloud his vision.

When Alan went in for eye testing, he was told that he was born with macular degeneration, a genetic abnormality that usually shows up when people are in their sixties and seventies. There was no way to treat the disease. He would never be able to drive, read or completely see again. Alan, 23, was devastated. He had to resign from the dream of his military career. He gradually began to lose his independence. There were people who told him to think positively, but this was not what helped him get through the encroaching darkness.

“No matter what people say, there were no positives in losing my sight. You might stretch it and say you appreciate your hearing; you might say, ‘Keep your head up and think about what all these other blind people do to get by.’ But I’d have given anything to change this,” Alan is quoted saying in Super Survivors, by David B. Feldman, PhD and Lee Daniel Kravetz. Instead, Alan faced the darkness. He knew what he couldn’t do anymore now that his eyesight was gone, so he began trying to figure out what he could do.

Alan became the first registered blind person ever to row across one of the world’s oceans.

He decided to do something that most people might see as crazy; he commissioned a rowboat to paddle from Spain to Barbados. While his blindness did not affect his ability to row, he had to figure out how to avoid bumping into sharp corners on board or burning himself on the electric stove. His navigator, Matt, who joined him on the boat, had tried to row this course across the Atlantic before and failed. It was a dangerous route that they were rowing with no motor, no sail, five-by-seven feet of maneuvering space and a compass. They packed enough food for a hundred days, but they hoped that they would make it there in less than 70 because they were racing hurricane season.

When they finally made it to their destination, Alan became the first registered blind person ever to row across one of the world’s oceans. Today Alan is training to be the first visually impaired person to make the grueling 600 mile trek from the coast of Antarctica to the South Pole.

To set that world record, Alan had to use grit and courage, tenacity and perseverance.

We can tap into that same power. Here are seven things that people with grit say to themselves to get them through the darkness.

1. What now? When a door closes on them, people with grit don’t dwell on that lost opportunity. They look at their current life and ask: What now? What next step can I take with my strengths and weaknesses? How can I move forward? What will be challenging but doable? What now?

3. I’m responsible. People with grit take responsibility for their lives. They don’t blame others or even their circumstances when darkness surrounds them. Instead they tell themselves: It is my choice to find a way to bring light into this situation. I am not stuck sitting in the darkness, wallowing in self-pity. I can choose to build an extraordinary life.

4. Keep rowing. Even after icy winds set Alan and Matt back several days, Alan rowed with the same intensity as before the setback. He had expected that when he would face the ocean, winds would come. And he had decided before he began, that he would keep going no matter what. People with grit see the darkness as a challenge. When they’re tired, it’s a challenge. When they’re cold and wet and pursuing their goal, they are happy that they are able to keep rowing.

5. I don’t settle. When Alan was deciding what to do after the Royal Navy handed him his resignation papers, he decided that he wanted a “watershed moment.” He wanted greatness. He wanted challenge. He wanted to be true to the fighter that was still inside of him. People with grit don’t settle. They don’t sit back and accept that this is all there is. They want more. They demand more of themselves. They spend their lives reaching higher.

7. This is important. Whatever they are doing at the moment, people with grit tell themselves that it is important. They don’t dismiss all the tiny details that they must attend to on the way to their destination as insignificant. They see every step and everything that they do to prepare as crucial and worthwhile. They view even their mini-goals, however ordinary they may seem to someone else, as critical milestones and accomplishments.

People with grit believe that with the darkness comes an opportunity to create light. And they inspire the rest of us to reach for that light.

Seven Ways to Strengthen Your Friendships

After the Shabbat Project