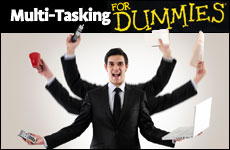 Do Not Read While Operating Heavy Machinery

Are you always in a rush? Do you find yourself constantly racing from task to task, wishing you had more time? Have you bought a book on time management, but haven’t had a chance to read it? If the answer to any of these questions is “yes”, you might want to skip the rest of this column. You don’t have time for it.

Are you always in a rush? If so, skip this column. You don’t have time for it.

No one has time for anything these days. Our world keeps moving faster every day, and everyone is afraid to slow down or they’ll fall behind. Think about how many inventions were created just to save us time. Dishwashers, for example. I saw a countertop dishwasher the other day that is made to hook up directly to the sink, and I thought, “That would make a great present for my wife!” But then I looked into it, and it turns out that it washes four place settings. People are buying dishwashers that tie up the sink for 45 minutes so that they don’t have to wash four dishes.

In fact, there are plenty of kitchen devices designed to save us time. Let’s say you want to make a cake, but it would take too long for you to manually mix the eggs and the sugar and the flour. Thanks to devices such as the Stand Mixer, all you have to do is get a step stool, take down the machine, which weighs about eighty pounds, put the pieces together, and then, within seconds, everything is mixed. And then you just have to take the machine apart, figure out how to wash all of the weird attachments, dry them off, and lift the eighty pounds over your head and into the closet! And then you’re done!

We also have microwave meals, where instead of cooking, you can pop the whole package into the microwave, and in just 3 minutes, you have an entire supper where the peas are the same temperature as the meat and all of the foods are basically the same consistency (“jello-ish”). And you can eat it quickly too, because the whole meal is like 3 bites.

So more and more, people are trying to cram additional activities into their day. But there are only so many hours in a day, so the only way to do more is to multitask. For instance, right now, as I write this column on my computer, I am also keeping an eye on my children, eating an ice pop, clipping my toenails, and using a sophisticated computer program to protect the galaxy by destroying enemy spaceships. You can’t measure productivity like that.

We even multi-task on the highway. People are driving, talking on their cell phones, shaving, listening to music, disciplining their children, eating ices, clipping their toenails, and protecting the galaxy from enemy spaceships. (Personally, I don’t multitask when I drive. I space out. And by the time I wake up, I have somehow arrived at my destination. Also, my nose is really clean.)

Most husbands multitask on a regular basis. Women complain about how they’re always doing a million things, but the typical husband, just while he’s eating supper, has to think about his day, plan his next day, read the paper, and listen for gaps in his wife’s conversation so he could go, “Uh huh.”

In fact, I think we would all collapse if not for Shabbos. Very few people multitask on Shabbos, unless you count reading the Israel news during the rabbi’s speech, or falling asleep on the couch with said Israel news on your lap.

But we do have to admit that things have gone too far, as is evidenced by the existence of the Executive Laptop Steering Wheel Mount. This is an actual product, manufactured by a company called Arkon, which turns your steering wheel into a workspace for your laptop. An item like this could definitely put people on the fast track to success. Or the hospital. But the important thing is that it will be fast.

Multitasking is nothing new. It goes back to at least the 1400’s, when Columbus was trying to steer his ship while text-messaging the other ships. (“I M C-sick. R U? ROTF”.) Which was why he couldn’t find his way to India.

The problem with multitasking, of course, is that it can be dangerous. The human mind was not made to concentrate on too many things at once. I have in my hand a March 7 article from FoxNews (this is the hand that was holding the ices, not the hand that was clipping my toenails), about how the government is padding a lot of the lampposts in London to protect people who walk into them while texting. Apparently, they conducted a study that found that one in ten people actually managed to hurt himself by walking into something while peering down at a tiny little screen and typing with his thumbs. The 6.6 million accidents have caused injuries ranging from mild knocks and cuts to broken noses and even a fractured skull.

“What happened to Bill?”

This is very serious. Imagine the implications. Let’s say you’re walking down the street and texting, and you bump into a lamppost and render yourself unconscious. The person on the other end will have no idea what happened to you -- “He just stopped typing. Did he fall off the face of the Earth?” And he won’t get an answer until a few minutes later. “He bumped into a lamppost,” the EMT texts back. “I’m driving him to the hospital right now.”

The survey also found that more than a quarter of people surveyed wanted lines painted on the pavement to create routes for texters to walk while using their phones. Although if I was in charge of the line painting, I would deliberately steer them into brick walls, mailboxes, garbage cans, and those little red phone booths. (“Guess what? I just walked into a phone booth! I’m in it now, but I’m not using the phone! LOL!”)

So we definitely have to slow down. Or start wearing helmets. But it will only work if we all agree to slow down. I came across a book recently that talks about something called “The Slow Movement”, where people are specifically trying to move slower and enjoy life. The eat slow food (like turkeys, which take 7 hours to cook), and they engage in slow travel, which is when you take your time and enjoy the sights along the way, although by the time you get to your destination the tension between your children is such that any object placed between them will immediately burst into flame. The book takes its readers to places like Italy, where the slow movement is catching on, albeit slowly.

But if we don’t stop, things will just keep moving faster and faster, around and around, until we all crash into a lamppost.

“What happened to Bill?” 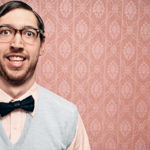 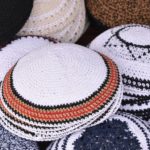