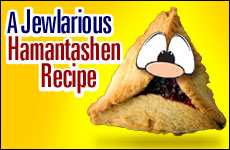 Both the recipe and the jokes here are real.

Cookbook recipes are all the same. You have a gorgeous picture of how the food is supposed to look but never actually does when you’re finished making it, and they post a cooking time that is totally not realistic, especially since, about 20 minutes into putting the recipe together, you’re going to realize you don’t have eggs. Recipes are designed for a perfect world where nothing burns and everything looks like the pictures, and the writer “made it for the family, and they absolutely loved it, and didn’t get sick a few hours later.”

This recipe, on the other hand, is set in the real world. I can explain further, but let’s be honest: none of you are reading this far. Who reads the introduction to a recipe? The only people who have that kind of time are people who have no intention of making the recipe at all – the kind of people who read recipes like they do science fiction: They get to the end and they go, “Well, THAT’S not going to happen.”

3. Wonder what that smell is.

4. Suddenly remember that you left some Tupperware in the oven after the meal on Shabbos so the guests wouldn’t see it.

5. Turn off the oven and scrape out the melted plastic.

6. Mix the first three ingredients, then the fifth, and then the fourth.

7. Tell your children that it’s not time to lick the bowl yet.

8. Spend 20 minutes rummaging through the drawers, looking for the spatula.

9. In a separate bowl that somehow still fits your stand mixer, mix the sixth and eighth ingredients, and then fold it into the first bowl.

10. Using a third bowl that you borrowed from a neighbor, mix the seventh ingredient with itself and fold that in as well. Or just say, “Forget it,” and dump everything into one bowl in the first place. Ingredients are ingredients, we believe.

11. Weaving around the multiple stepstools that your kids set up to watch you, put the mixture in the fridge and allow to chill at 38o.

12. Tell your children that it’s not time to lick the bowl yet.

13. Whenever you remember (allow 6-8 days), take mixture out of the fridge and say, “How long has this been here? What is it, even? Oh, that’s right.”

14. With floured hands, on a floured surface, while standing on a floured floor, and just generally surrounded by mounds and mounds of flour, roll out mixture into small amounts ¼ inch thick.

15. Using a relatively clean drinking glass or a garbage can lid, cut dough into neat circles.

16. Apply jelly to the center of each circle with a spoon or a turkey baster. You can be as cheap as you like with the jelly, but people will know.

17. Pinch the edges of the dough into triangles, bearing in mind that most of them will pop open. Yes there is something creepy about “pinching” dough although we aren’t quite sure what.

18. Using an oven mitt or a yarmulke, place cookies in the oven.

20. Cookies are ready when the smoke alarm goes off. (at least 20-25 minutes, assuming you remembered to turn the oven back on)

(EDITOR’S NOTE: If you make it past the jokes, this is actually a very good recipe. And I haven’t gotten sick. Yet. This recipe in its original form can be found here)

The Brainy Bunch
In the Shadow of David and Goliath
Where Do the Laws of Nature Come From?
Saadiah Gaon, Rashi and Maimonides: How Three Rabbis Revolutionized Judaism
Comments