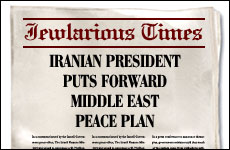 Announces another "gift to the West."

JEWLARIOUS SATIRE:After he announced an "Easter gift" to England, releasing 15 naval officers illegally captured in Iraqi waters, Iranian President Mahmoud Ahmadinejad announced a "Pre-Shavuous Gift to Israel" - a new peace initiative for the Middle East. Calling his plan a "trial balloon which we offer the vermin and infidels in the spirit of true brotherhood and understanding," Ahmadinejad offered, in his words, "a plan which Israel must accept or face complete annihilation."

At a Tehran-based Press Conference, Ahmadinejad unveiled his central tenet: "Israel must withdraw to the 586 B.C.E. borders when they were exiled from the land by our Babylonian cousins, and must allow all of the native sheep and goats displaced in any conflicts and their offspring to return."

Seated beside Ahmadinejad, UN Envoy to the Middle East, Alvaro de Soto, immediately applauded the plan, stating, "We see this as a constructive way forward. We admire the Iranian President's courage and his boldness in offering fresh and untested ideas." A testy Ahmadinejad continued, "I am not done yet and if you interrupt again, I will break your arm. We demand that as part of the peace process, Iran be allowed to make its nuclear weapons program operational and will use such weapons on any Israeli who returns." A cautious De Soto called the proposal, "reasonable and workable - ideas which will not change the daily life of any Israeli citizen." He then paused and added, "Please don't break my arm."

Rounding out his plan, Ahmadinejad added, "We demand that all the locusts and pestilence currently living in the land of Mohamed convert to Islam and stop pretending that the Holocaust happened. We require the country of Lucifer's children to change its name to ‘Iran' and absolve itself of democracy. We insist that the Iron Shiek be recognized as the greatest WWF wrestler of all time and be placed on all coins and stamps circulating in the region." When pressed Ahmadinejad conceded that, if Israel met his conditions, Iran would consider normalizing relations with "Satan's earthly messengers of hell and damnation" within five to ten years.

In response to the Ahmadinejad Plan, Israeli Government Spokesman, Mark Regev, declared the plan, "absurd as can be" and added, "even the recognition of the Iron Shiek - the most logical point of the bunch -- is really a non-starter."

Danish President, Anders Fogh Rasmussen, then criticized Israel, stating, "This narrow-mindedness is typical of Israel. Why won't Israel change its name to Iran and give up all democratic rights for peace?" Norwegian Prime Minister Jens Stoltenberg added, "This could be an Iranian Oslo, but Israel just can't see the mutual benefits herein."

Embracing the plan, former President Jimmy Carter called for, "universal recognition and acceptance" and called on the Nobel Committee to award its Peace Prize to Ahmadinejad immediately. Carter added, "If they gave one to Arafat, how hard would it be to get Ahmadinejad one?"

Laughter Yoga: A Real Stretch
For Every Individual, A Torah Scroll
Allegiance To The Monarch
Meet the Real You: Yom Kippur
Comments
MOST POPULAR IN Jewlarious
Our privacy policy
Aish.com Is Looking for Great Writers