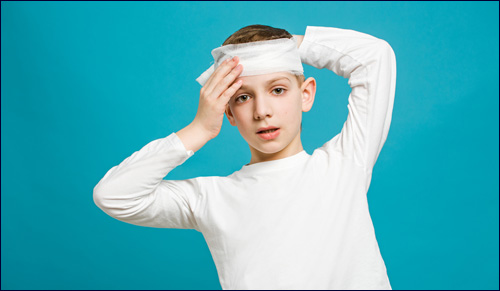 As my son lay below me, silent and motionless, thoughts raced through my mind.

The weather outside was that unique Israeli blend of crisp winter air and warm sunshine. My daughter and I were marveling at how quickly we’d completed the Shabbat cooking early that Friday afternoon. But the peace was suddenly shattered by the sound of my son bursting through the front door and frantically exclaiming: “Yehuda fell!”

Something about the urgency in his voice propelled my husband and me down our building’s four flights of stairs at top speed.

For months, my boys had been building a clubhouse with some friends atop a flat-roofed shed adjacent to our building. Rushing to the site, my husband and I discovered our seven-year-old son lying prone on the cold stone steps beside the shed, his head at the bottom of the stairs, a river of blood gushing from it and flowing down the cobblestones below.

Apparently, Yehuda had lost his balance and fallen backward from a height of eight feet, landing head-first on the unforgiving stone stairs. Our neighbor was taking out his garbage at that exact moment, so emergency services were summoned immediately. By the time my husband and I arrived on the scene moments later, a volunteer medic was already assessing Yehuda’s condition and an ambulance was on its way.

I stood by helplessly, watching the scene in horror. Yehuda lay below me, silent and motionless. With my training in first-aid, I was all too aware that even if Yehuda would survive, I had no guarantee that he would ever walk again – or even be able to think normally again. As I gazed down at him, my heart thudding in my throat, the following thoughts raced through my mind.

Yehuda. The name “Yehuda” is derived from “hoda’ah” the Hebrew word for gratitude. At Yehuda’s brit milah, my husband expressed that the name “Yehuda” is meant to serve as a constant reminder to us to thank God for the myriad gifts that He generously bestows upon us – and especially for the gift of this precious child. Even when he wakes us in the middle of the night (again!). Even when we are telling him for the third (or thirteenth!) time to get into pajamas. Even when we catch him scribbling on the walls (with permanent marker!). Even then, we should keep our focus on our appreciation for our precious child.

Have I lived up to this mandate? I wondered. At that moment I was being scathingly honest. No, I admitted to myself with shame. All too often, I have fallen into the trap of pining for things that I feel I lack instead of focusing on my innumerable blessings.

Please, God, I begged wordlessly. Restore Yehuda to full health, and I will try my utmost to always thank You. For Yehuda and for all of the many, many blessings You have showered upon me.

Just at that moment, as I continued to gaze down at my son, he started to cry – inaudibly, but hard. He was conscious! Seconds later, while the medic was still awaiting a brace to immobilize Yehuda’s neck, Yehuda turned his head to the other side, and then moments later, astoundingly, raised himself to a sitting position!

He spent Shabbat in the hospital with my husband at his side, and miraculously Yehuda’s most serious injury was the large gash to his head which required stitches. Mere days later, he was back in school, and the following Shabbat we celebrated with a blessing party for the neighborhood children – to give thanks, hoda’ah, to God for our miracle.

And then… life went on. In the immediate aftermath I had but to glance at Yehuda’s head to remind myself, “I have Yehuda, healthy and whole – how could I ever want anything more?” Yet I knew that in order for this inspiration to truly take root within me, I must carefully nurture the tender new shoots of gratitude that had so recently been planted.

Yehuda’s stitches came out… and my mind began to return to its habitual thought patterns, focusing on my problems, daydreaming longingly about things I wished I had. But I made a conscious effort to glance down at the bloodstains still discernible between the cobblestones and to remind myself to channel my thoughts in more positive – more honest – directions.

Weeks passed, and then months. The sun and rain faded the stains on the ground and Yehuda’s scar was hidden by his hair. But I noticed that my mind was gradually being trained to move on its own toward counting my blessings instead of just the items on my wish list.

It is now a year later, and this is not a challenge I can mark off as “Done.” But I have reached a point where I feel like I can stand before God and honestly say, “I heard Your message. I am trying to change my focus, I am working on gratitude, I am improving.

“And most importantly: Thank You, God.”

The Twelve Gifts of a Bat Mitzvah
Should I Break Up, Get Engaged or Keep Dating?
Time Is Your Precious Commodity
A Constant World in Flux
Comments
MOST POPULAR IN Family
Our privacy policy