The Jewish Ethicist - Off Target 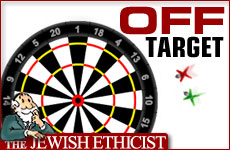 Unrealistic targets are an invitation to unethical activity

Q. My boss is always reminding us to maintain ethical sales practices, but the sales targets he makes for us are really impossible to attain without forbidden tactics.

A. The problem you describe is one of the most widespread and severe ethical lapses in today's business environment. Many studies claim that unrealistic targets are one of the main contributors to improper practices. Ambitious plans are good and important, but sometimes managers make targets that can achieved only through means such as: misleading customers through exaggerated claims; getting an unfair advantage on competitors through sabotage or slander; misleading accounting practices like recording sales prematurely or recording fictional sales, and the like. Occasionally workers are incentivized to harm their own firm, by poaching sales from other salespeople in the firm or from other divisions.

Egging employees on to unscrupulous conduct is bad enough, but such employers often add insult by injury by warning workers not to violate ethical norms. Of course these exhortations are praiseworthy in themselves, but they are hypocritical and cynical if workers are penalized for heeding them and rewarded for ignoring them.

A typical example of this attitude is found in the Biblical story of Avimelech, the king of Gerar. The book of Genesis tells us that Avimelech's servants stole a well from the patriarch Abraham. When Abraham rebuked Avimelech for this, the king was seemingly contrite: "I don't know who did this, nor did you inform me, nor have I heard of it until today." (Genesis 21:26.) But let us examine the king's words more carefully: Conspicuously missing from Avimelech's apology is an acknowledgment that he was unaware of the theft!

Avimelech was evidently aware of the mischief taking place in his kingdom. But he was careful to insulate himself from it: he made sure no one told him exactly who was responsible, to keep the victim Abraham at a safe distance, to prevent anyone one providing him with definitive information.

We can contrast this approach with that found in a famous incident from the career of King David. The Bible tells us:

Yoav and his brother Avishai killed Avner, because he killed their brother Asahel in battle [between David's and Saul's forces] at Givon. And David said to Yoav and all the people with him, Rent your garments and don sackcloth and mourn before Avner. And King David followed the bier. . . David swore saying, "So may God do to me, and so more, if I eat bread or anything else till the sun set." (II Samuel 3:30-35.)

David could merely have asserted, "I didn't order Avner's assassination, I am not responsible." But recall that David had an evident interest in the elimination of Avner, the leader of the forces of his rival Saul. A perfunctory disclaimer would not have sent the message that unauthorized bloodshed could not be tolerated. David had to make demonstrative acts to show his dismay and remorse over the terrible act that took place under his reign.

David displays the same attitude in another situation as well. David and his army were besieging Bethlehem, the city of his birth. "And David longed, and said, Who will give me water to drink, from the well in Bethlehem, next to the gate?" (II Samuel 23:15) Internalizing this goal, David's commandos broke into the city and brought him water from the well, at immense risk to their lives yet without any attaining any meaningful military advantage.

It is not enough to denounce the gains; it is also necessary to renounce them.

Perhaps David had previously ordered his soldiers not to engage in any reckless attacks, but even if he had, subordinates generally give greater priority to expectations than to regulations. David should have realized that expressing his vague longing might lead to an imprudent raid by his soldiers; seeing the water he immediately regretted his words.

But David did more than express regret. He could have said, "In the future, don't make any raids without an explicit order." But this could have been understood by his subordinates as a "wink and a nod", expressing verbal disapproval but substantive satisfaction. David's actual reaction was to refuse to drink the water: "And he said, God forbid that I should do so to the blood of the men who went at the risk of their lives. And he refused to drink it." (II Samuel 23:17.)

From David's example we see that when inappropriate expectations are made of subordinates, it is not enough to denounce the gains; it is also necessary to renounce them.

Setting ambitious targets is often necessary for a growing business. Establishing these targets is not inherently in opposition to insisting on ethical conduct. But management must send a clear and unambiguous message that when push comes to shove, it is the targets that have to yield to ethics and not the other way around. Managers have to keep constantly informed about what their subordinates are doing, eschewing the example of Avimelech. And they have to make it clear that they will not seek any benefit from their own oversights, following the example of David.

The Jewish Ethicist: Kicking Back Kickbacks

Your Money or Your Life
It Takes A Lot Of Faith To Be An Atheist
How Instagram Brought Back This Nostalgic Soup
What Makes Eli Run?
Comments
MOST POPULAR IN Current Issues
Our privacy policy