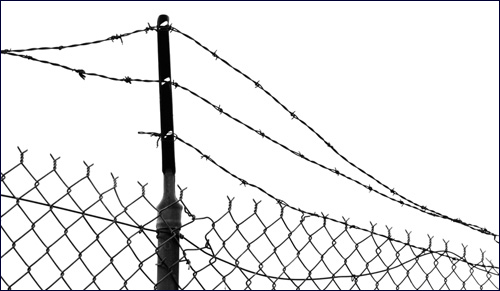 Like a shofar, the alarm pierced the air, warning us of a security breech in our Israeli community.

We moved to Israel a month ago to a beautiful community north of Jerusalem and for all of the concerns of my friends and family in America, things were relatively safe. In fact, it was only this past week that I experienced my first time hearing the town's central alarm blasting through the air. The piercing sound meant only one thing: there had been a terrorist infiltration across the security fence surrounding our new community.

It was late at night and I checked on my wife and kids who were fast asleep and made sure the doors were locked and the windows shut. Not everyone was as shaken as I was. My next door neighbor was significantly braver than I as I saw him defiantly walking outside with a garbage bag. He'd either been through this a thousand times since he was a kid or had decided he'd rather take his chances with the bad guys than have his wife find out he'd forgotten to take out the trash. Or maybe it was the daily routine of drinking unsweetened Turkish coffee in the desert sun that toughened him up. One way or another, I was unable to go to bed myself due to the intermittent screeching of the alarm and my own adrenaline. So I sat in my armchair and prayed for the safety of my family, my neighbors, and the young soldiers of the Israeli Defense Forces (IDF) who would be combing every last inch of our community for terrorists.

I also sought to find a deeper meaning behind the possible infiltration. While reading a message from my upstairs neighbor confirming that two unidentified figures were seen scaling the security fence less than a kilometer from our street, I asked myself: what is there for me to learn from this experience?

With the High Holy Days upon us, I began to think about what other infiltrators I am unknowingly allowing to cross into my life on a daily basis. It wasn’t too difficult to figure out.

Anger: the most destructive force in a person's life.
Jealousy: a blinding rage destroying the most beautiful of friendships.
Fear: a crippling power that paralyzes each of us from reaching our full potential.

The Jewish New Year is also a time for mending our relationships and breaking down barriers between fellow Jews. Perhaps the infiltration across the security barrier was a spiritual alarm to tear down our own personal fences. I can use this experience as a reminder to bring those I love even closer by explicitly telling them how much I appreciate and love them.

It was also clear to me that the piercing alarm was a shofar of sorts, awakening our spiritual awareness that God is always watching over us. As the Psalm says, "Behold he never slumbers, the Protector of Israel never sleeps" (Psalms 121:4), for we are truly never alone. Sometimes we see this in the form of open miracles and other times we must be grateful for the soldiers and security forces who carry out their profound and sacred mission of keeping us safe each and every day.

With the break of dawn came the wonderful news that our community was secure and that everyone could return to their regular routines. Like the final shofar blasting at the conclusion of Yom Kippur that signals the victorious finale of repentance, the deafening absence of the community’s alarm was a sign that we too had survived. Walking outside a few hours later, I made sure to thank the young IDF soldiers who had tirelessly performed their mission and to greet new neighbors I had yet to meet. And once I realized that I might have been the only one on my block to have experienced this for the first time, I knew it was time for some strong Turkish coffee and to start toughening up.

My Response to Terror

My First War: The Aliyah Chronicles #6
Why Are The Prayers Of Yom Kipur So Repetetive?
Ha'azinu 5783: A Time for Unity!
Twisted Thinking
Comments