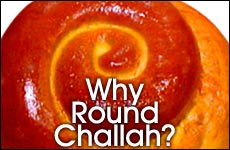 Some surprising spiritual insights from the Rosh Hashanah challah.

All year long our challah is braided, but it is round for Rosh Hashana. What does the challah's shape teach us about this special time of year?

Rosh Hashana is a holiday filled with physical doorways into the spiritual world. The blasts of the shofar are the prime example of this (see: Symbolism of the Shofar). But there are many others as well All year round, we dip our challah in salt before distributing it; during the High Holiday season, many use honey so that we may have a sweet year. For the same reason, many make a sweeter challah dough as well.

Every Jewish custom is significant on a very deep level. Some have levels that we can access; others are beyond our grasp. Even the shape of the loaf of challah can teach us something deep about the holiday on which it is consumed.

The Shabbat challah is braided. "Six days shall you work (engage in creative activity), and on the seventh shall you desist" (Exodus 34:21). Part of the preparation for the Shabbat is engaging in melacha, creative activity. Braiding is creative activity. The braid is a shape that does not appear in nature. (Ficus trees are hand-braided.) It is a shape that is made by humans and it is representative of the human ability to manipulate the raw material of the world. Braiding the challah strands helps us harness our creative capacities for the purpose of observing the Shabbat.

Braids don't appear in nature; they are created by humans.

But braiding is more than that. The Talmud tells us that God Himself braided Eve's hair in preparation for her wedding to Adam (Brachot 61a). Was He merely beautifying her? Rabbi Avraham Chaim Feuer teaches that God's braiding of Eve's hair was His wedding gift to the couple. He was arranging her creative energies, channeling her imagination into an ordered form that would allow her to maximize her potential as a wife. He was both charging her and gifting her with the ability and the task of channeling the energy of the couple into positive and creative directions. The braid represents that directive, to focus and give order to the energies of one's household.

Significantly, many loaves are braided out of six strands. Six represents the days of the week that are not Shabbat. My mother-in-law taught me that braiding six strands into one loaf represents the six days of the week that are bound up in the one Shabbat. Six directed toward one, weekdays manifesting on Shabbat, this world bearing fruit for the next. The six-stranded braid offers us the direction of the channeling that we are enjoined to accomplish.

Round challahs are to the High Holiday season. Some say they represent a crown that reflects our coronating God as the King of the world.

Others suggest that the circular shape points to the cyclical nature of the year. The Hebrew word for year is "shana," which comes from the Hebrew word "repeat." Perhaps the circle illustrates how the years just go round and round. But Rosh Hashana challahs are not really circles; they are spirals…

There are 70 faces to the Torah, or in Hebrew, shiv'im panim la'Torah. This means that there are 70 ways to understand every facet of Torah. The word "panim" can be translated either as "face," or as "innerness." Thus the Torah presents 70 different "faces," appearing differently depending on the psychological, intellectual and spiritual angle from which it is examined. It also means that there are 70 different inner realities for every facet we can see.

Even while studying the same weekly Torah portion, we are able to tune into a new aspect each year.

King David lived for 70 years, and, in our tradition, that is considered to be the "average" lifespan. Each subsequent year of life makes a person into a different creation than the year before. So if one lives the average lifetime, another understanding of "70 faces to the Torah" could mean that we, through living 70 years, have our own 70 faces that we can turn to the Torah. That is why we often have "aha!" moments even as we study the same concepts we studied last year, or hear the same weekly Torah portion we have heard for years in a row. Turning a different one of our faces to the Torah means that our "receptor sites" are different, and we are able to tune into a new aspect each year.

The word "shana" has a double meaning as well. In addition to "repeat," it also means "change". As the year goes go round and round, repeating the same seasons and holidays as the year before, we are presented with a choice: Do we want this shana (year) to be a repetition, or do we want to make a change (shinui)? Hopefully, each year we make choices for change that are positive, and each year we will climb higher and higher, creating a spiritual spiral.

The shape of the Rosh Hashana challah reminds us that this is the time of year to make those decisions. This is the time to engage in the creative spiritual process that lifts us out of the repetitive cycle, and directs our energies toward a higher end. Have a sweet new year!