Laws of the Festive Meals 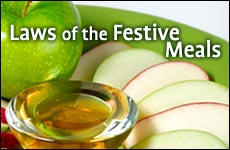 Symbolic foods and lots of honey, too.

1) Should the bread of hamotzi be dipped in salt, honey, or both?

2) Why are special foods eaten on the night of Rosh Hashana?

Following hamotzi, there is a custom to eat certain foods that are reminiscent of blessings, with the hope that they should be signs for a good year. Certainly one should be careful not to become angry but maintain a relaxed and happy mood, so that this too should be a good sign for the new year.

3) What are the different foods that are customarily eaten?

Among the foods are dates, apples dipped in honey, pomegranates, leek, carrots, black-eyed peas, beets, gourd, fish, and the head of an animal or fish.

The symbolic foods are based on a word game which connects the name of a certain food, to a particular hope we have for the new year. Here is a list from the Talmud of symbolic foods customarily eaten on Rosh Hashana. (The food and its related meaning are written in capital letters.)

When eating LEEK or CABBAGE, say: "May it be Your will, God, that our enemies be CUT OFF."

When eating BEETS, say: "May it be Your will, God, that our adversaries be REMOVED."

When eating DATES, say: "May it be Your will, God, that our enemies be FINISHED."

When eating GOURD, say: "May it be Your will, God, that the decree of our sentence should be TORN apart, and may our merits be PROCLAIMED before You."

When eating POMEGRANATE, say: "May it be Your will, God, that our merits increase as the seeds of a POMEGRANATE."

When eating the HEAD of a sheep or fish, say: "May it be Your will, God, that we be as the HEAD and not as the tail.

4) Should they be eaten in a certain order?

5) Should a blessing be recited on the fruits, even though they are eaten after hamotzi?

Yes, borei p'ri ha'eitz should be recited once for all the fruits.

For the symbolic vegetables, one should do one of the following:

- Recite the blessing over a vegetable that is certainly not part of the meal, having in mind to include the symbolic vegetables. Examples of this are banana and strawberry.

- Eat the symbolic vegetables with bread and do not recite a blessing.

- Eat the symbolic vegetables with the main course and do not recite a blessing.

6) Are there any foods that should not be eaten on Rosh Hashana?

The custom is to avoid nuts and sour foods such as pickles. Some have the custom not to eat grapes.

7) On the second night of Rosh Hashana, should the blessing of shehecheyanu be recited when lighting the candles?

Yes. If possible, a new garment should be worn when lighting and have in mind that the blessing of shehecheyanu is for mainly Yom Tov and also the new garment. Alternatively, a new fruit should be placed next to the candles and included with the blessing (but not eaten until after kiddush).

8) When should the candles be lit?

If a new fruit is included in the shehecheyanu, the candles should be lit just before kiddush in order that the fruit can be eaten without a long delay. Otherwise the candles may be lit any time after nightfall (irrespective or whether a new garment is worn or not).

9) Is the blessing of shehecheyanu said during kiddush?

Yes, but the same procedure should be followed as for candle-lighting, i.e. it is preferable to wear a new garment or put a new fruit on the table if available. The man should have in mind to include both Yom Tov and the new item when saying shehecheyanu.

10) Are the symbolic foods eaten on the second night of Rosh Hashana?

There are different customs about this. The main custom is not to eat them.