Why Kiss the Mezuzah? 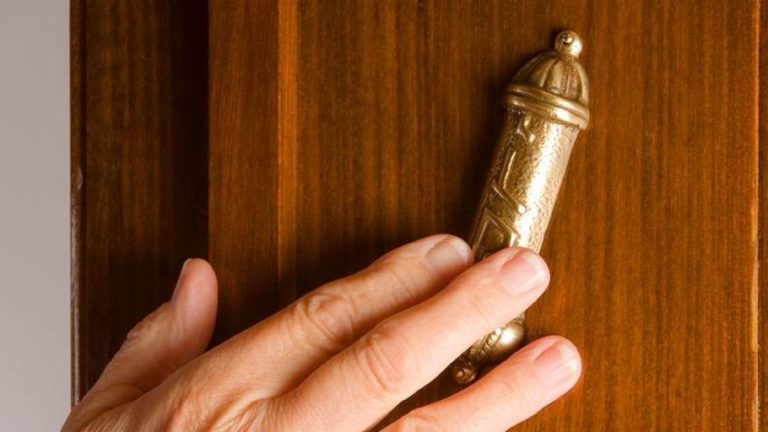 How the mezuzah provides a daily connection to spirituality.

I was sitting in a coffee shop waiting for a friend; I had chosen a table with a strategic view of the door so I could spot him as soon as he arrived. Each time the door opened I quickly glanced up to see if my friend had walked in. At one point, the door opened and a very tall, attractive and immodestly dressed woman walked in. She looked like she might have been a model.

Before I averted my eyes and looked back at my menu, this woman did something that struck me: she reached out her hand, touched the mezuzah outside the door, and proceeded to kiss her fingers. It was a gesture I have witnessed thousands of times; nonetheless, I felt a sense of dissonance, of the incongruity between her lack of outward religious identification and the religious gesture she performed before she entered the building.

My friend's tardiness allowed me to perform a sociological experiment over the next few minutes; I quickly noticed that there was absolutely no correlation between outward appearance and the act of kissing the mezuzah upon entering or leaving a room.

Related Article: Mezuzah: The Inside Story

I mentally filed this as another wonder of living in Israel, alongside another such striking episode. Several years ago, during a particularly tense period in Israel, the security guard at the entrance to my bank employed a most unusual security regimen: He greeted customers at the door with a bundle of spices in hand. Anyone who knew the correct blessing was allowed in; anyone who didn’t was subjected to a more conventional security check. In this instance, as well, I was quite surprised to see how many "non-religious looking” Jerusalemites knew the proper blessing. I made a second mental note: don’t ever judge people based on their outward appearance.

Why, though, did this woman, and so many other patrons of the restaurant that day, kiss the mezuzah? Indeed, why do Jews kiss mezuzahs?

Some may view this as a superstitious gesture: They seek protection from the elements, from both the physical and spiritual harm that lays in wait beyond the security of the home.1 However, for many, kissing the mezuzah may be an expression of simple and honest faith. They seek a connection with God, and view the mezuzah as an expression of this connection.

In the middle ages, a number of rabbinic authorities expressed approval of the custom of touching the mezuzah upon taking leave of one's home while uttering a prayer asking God for protection.2 The mystics instructed that when touching the mezuzah, specifically the three-lettered name of God – SHA-DaI – that is printed on the outside of the parchment, should be touched, and then the finger which touched this holy name should be kissed.3

What is it about this name Sha-dai that affords protection and gives us strength when facing the world? Why is this particular name of God associated with the mezuzah, so much so that some say the name Sha-dai is actually an acronym for shomer dalatot Yisrael – ‘protector of the doors of Israel’?4

This name of God is associated with the ability to control nature or harness instinct.

The Talmud5 explains that this name is intertwined with the very basic processes of creation: Prior to the moment of Creation, there was nothing. The act of Creation was an act of expansion, which progressed until the point that God said to nature, "dai" – "enough," desist from expanding. This name, then, is associated with the ability to control nature or harness instinct.

The name Sha-dai is found for the first time in the Torah when God gives Abraham the commandment of circumcision, as if to express the concept that, although man is surely a creature of natural impulse, although man is often controlled by instinct, nature can and must be harnessed. Just as God harnesses nature, creates boundaries so that the universe does not continue to expand into extinction, so can man harness his own nature, draw lines within which he can realize his potential and become perfected.

The biblical character most closely identified with this characteristic is Joseph; the Divine name Sha-dai is used in connection with him more than any other biblical character. We recall that Yosef heroically controlled his own instinct and impulses when propositioned by the wife of Potifar, his master. He practiced restraint, creating and respecting the boundaries that comprise moral behavior. He knew the secret of Sha-dai.6

Although the original custom was to touch or kiss the mezuzah when leaving one's home, many Jews have extended this practice to every doorpost that has a mezuzah. They seem to have decided that uttering a silent prayer and asking for Divine protection is a wonderful way to punctuate the day with spiritually uplifting mini-events.

But the truly "Godly" gesture is not merely reaching out one’s hand to the doorpost; it is knowing how and when to say "enough" – dai, of practicing self-control. The restraint that we learn from the very act of Creation should be a guiding principle for our lives, an organizing principle that can help us perfect all our relationships.

Self-restraint – control of the human impulse to expand, to control, to conquer – will help us when are at work, and when we are at play. It will even help the next time you see a woman who looks like a supermodel in a coffee shop – just picture her kissing the mezuzah, and say "Dai," – enough.

Mezuzah: The Inside Story

Tzitzit
Should I Break Up, Get Engaged or Keep Dating?
Time Is Your Precious Commodity
A Constant World in Flux
Comments
MOST POPULAR IN Mitzvot
Our privacy policy