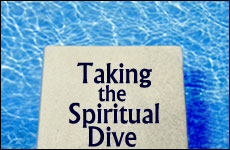 Mikvah for the thoroughly modern woman

I began my married life with a non-Jewish husband, an ambitious nature, a college degree, and a bit of an attitude. Sure, I was a spiritual person, although I couldn't define spirituality for you, except to say it was a character trait that you either had or didn't have. It was something you just felt. It meant being a good person and having the ability to empathize when something bad happened, the ability to make a nice toast at Thanksgiving, the ability to feel sad at a sad movie. That didn't have anything to do with God, right?

In his 30's my husband, a business executive, had a premature mid-life crisis. Unlike some men, my husband's crisis was one of faith and spirituality (there is that word again) and did not include a red sports car. My husband found Judaism and was searching a spiritual path that would eventually lead to a Conservative and then an Orthodox conversion.

In beginning my own spiritual quest, I found myself sitting unexpectedly with two women who were learning with an Orthodox rebbetzin about the Mikvah, the Jewish ritual bath. I was there by accident. I didn't pick the topic. At first, I really had no idea what we were learning. I liked the rebbetzin. Very quickly, I found l liked the women.

Like me, these women were not from religious backgrounds. They were smart and funny, and we laughed our way through this intimate class. We were discussing our spiritual love lives. It was not unlike an episode of a certain infamous TV show set in New York City. We were just four women talking. Sure, we were not drinking Cosmopolitans and we were sitting in a shul, but hey, we were being real and there were no cameras recording us.

I was being introduced to an ancient approach to marital harmony -- a truly kosher approach to intimacy: the mitzvah of Taharat HaMishpacha or Family Purity. It wasn't at all what I thought. It didn't include any of the angry repressive ideas that I had heard about from my grandmother. It was a loving approach to intimacy that did not demean the participants or generate guilty feelings about our bodies. What a revelation.

I kept repeating that I was there just for the learning and the company, not for the how-to part.

Simply put, it's a system of some "no physical contact" days every month during the time a woman menstruates plus another seven days, followed by immersion in the waters of the mikvah. That means a minimum of 12 days without any touching. Oy. That's a long time. Why would a modern, married woman impose such a system on herself, not to mention her "happy-with-the-way-it-is-now" husband? Limiting physical intimacy, at first, seems counterproductive. How would it affect my marriage?

For several weeks, the four of us gathered in the shul to learn about the mitzvah. None of us had committed to actually going into the mikvah. I kept repeating that I was there just for the learning and the company, not for the how-to part. Um, I don't need this stuff thank you, but it started to sound good.

Then there was learning all the information about the mikvah dip itself. I went to see the mikvah in our community and it was beautiful. It wasn't like a black pit under the shul; it was like a women's spa.

The claim was that Taharat HaMishpacha did wonders in recapturing the magic of being newlyweds and maintaining freshness and romance in marriage. Eventually I was intrigued enough to decide to take the plunge.

NO ONE IS GOING TO GET HURT

I took a leap in this part of my journey to decide to follow the rules of this mitzvah, even though I didn't comprehend them. I knew it was something I'd have to first experience in order to gain some kind of understanding. This difficult leap was made easier because I was exploring a mitzvah that involved only me and my encouraging, supportive husband. No one else needed to know, and no one was going to get hurt if I kept an open mind and learned.

The religious women I met weren't prudish ladies who dressed in the closet. They loved their husbands and their lives, and they were going once a month to the mikvah.

Maybe I could give it a try.

Somehow, this is not restricting, but actually freeing.

With the physical aspect of our relationship sidelined during these days, we are limited to talking. What a concept. So we talk. This is great. There are no false hopes being raised, we both understand and are committed to the boundaries that observing this mitzvah has set. Somehow, this is not restricting, but actually freeing. We are free to talk into the night about our goals and dreams. We are free to express our love without demonstrating it physically.

At the end of the separation days, comes the big day -- or rather the big night -- when the woman goes into the mikvah. Before she can immerse herself in the spiritual waters of the mikvah, she must make sure that there is nothing on her body to separate herself from the experience of the enveloping water. She removes all makeup, jewelry, and nail polish, and soaks in a bath, becoming completely clean. The final step before the mikvah is a shower, hair washing and combing.

The preparations reminded me of preparing for a big date -- the attention to the physical connecting me to my body in a very powerful way. I work out all the time, but I never pay this much attention to myself, except to be critical.

The idea of removing physical barriers to the water caused me to reflect on the physical and emotional barriers that we put in our lives that can keep us separate from our spouses. I thought about things like the TV, the computer, the blackberry, and the phones as well as psychological barriers to intimacy, like feeling fat or somehow undesirable that can keep me separate from my husband and how I can take action to eliminate these things. And how by being open to learning about the mikvah, I had already taken the first step.

Far from being repressive, this is pampering as tradition and ritual, physical self-involvement as part of a spiritual quest. That works for me.

Human beings are different than animals. We can make choices and not act purely on instinct. We can elevate all our physical actions by bringing God into the picture and making them holy. The Taharat HaMishpacha laws enable us to bring God into the bedroom.

My experiment culminated with a mikvah dive that allowed me to experience the warm mikvah water as God's own embrace. Bringing God into the most intimate area of my life has made me eager to take on more mitzvot.

Mindy McLees lives in Sherman Oaks, California with her husband and two sons. She is currently at work on a book about the Mikvah. You can contact her at joyousmin@gmail.com.

One Drink Too Many: My Journey of Breaking Free from Alcohol
The Scandalous History of the Aleppo Codex
Who was Two-Gun Cohen?
Why Really Everyone Believes in Free Will
Should Jews Support Ukraine?
The Jews of Cuba
Comments
MOST POPULAR IN Women
Our privacy policy