Why We Let Our Kids Draw on the Walls 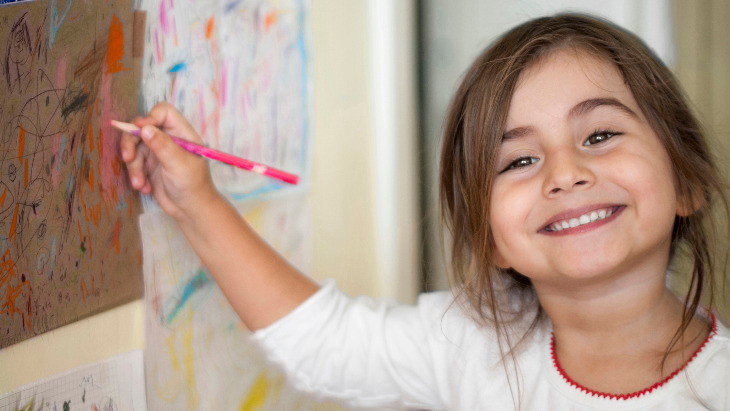 It’s not for the faint-hearted, but our home showcases the love and laughter that thrives under our roof, and reflects our desire to nurture our children’s creative spirits.

A five-star review on Airbnb: “Guests left the house exceptionally clean. Would recommend to other hosts.” This may surprise anyone who knows our family, but, yes, this review was written about us, following a foray into the world of remote working from a serene location (or better known as a necessary mental health relocation).

I laugh as I think back to the hour I spent scrubbing blue crayon from the walls and returning furniture to its original place. Despite deliberately not packing crayons and insisting that only soft toys join us on our trip, when the adults were asleep, the artists came out to play. We awoke, in horror, to a gallery of unidentifiable images. The artists beamed proudly, but the parents were holding back tears.

I told my husband, “We won’t get back our deposit!”

It was a small miracle that all of the crayon stains came off and that no marks were left on the hardwood floors. We left the home neater than our own humble abode has ever been. The coffee table, which had been relocated due to a dance-party-gone-wrong, was back in its esteemed place, not betraying the story of its tussle with a toddler (who attained a black eye), nor the phone call it overheard between concerned parents and the pediatrician.

Orderliness has its place in the world, but sometimes it’s best to embrace life’s happy messes.

Orderliness has its place in the world, but sometimes it’s best to embrace life’s happy messes. Jean Piaget emphasizes one’s need to express himself, even at the young age of three years old. Early on, a child seeks to use symbols to depict an object or action. We deeply honor this preoperational period in our home.

Our children often tape their pictures to the walls, and there are times when they use the actual walls as their canvas. We sometimes do get strange looks from company, because our approach is not so typical of society. Some families have rooms which are meant as displays rather than as living spaces. To quote Robert Frost, out of context, these rooms are “less traveled by,” and are meant to exhibit some of the more elegant pieces in a home. They come across as museums.

Our family makes no attempt to convey such sophistication, nor do we attempt to cover our children’s artwork.

I’ve heard people say, “Your house is not a museum,” in an effort to alleviate the pressure of upkeeping a magnificent appearance. I humbly disagree. Our home is, indeed, a museum. It showcases the love and laughter that thrives under our roof, and it reflects our desire to nurture our children’s creative spirits.

“Why don’t you paint your walls a nice color?” we’re often asked. 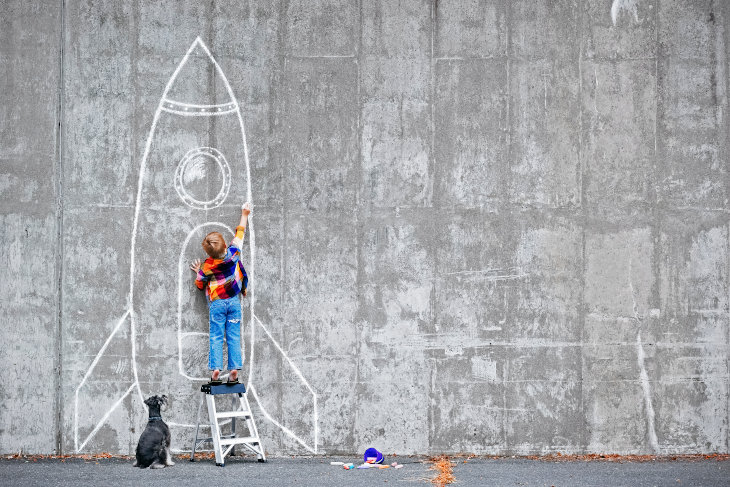 There is a time for everything, including a time to chide children when they behave inappropriately, but life can be more enjoyable when a parent intentionally chooses to look the other way. Choose your battles. The thrill of coloring on walls eventually wears off, and some parents get to see their children produce exceptional masterpieces on actual canvases or other mainstream mediums. By then, budding artists have evolved into adolescents, searching for ways to tap into their gifts and achieve healthy self-esteem.

While it’s not for the faint-of-heart, supporting children in their early approaches toward self-expression may have long-lasting benefits and help them safely venture into Piaget’s concrete operational and formal operational stages (when they approach matters more rationally and methodologically). They may also come out ahead from the vantage point of Erik Erikson, in promoting autonomy over shame and doubt (Erik Erikson seems to have really understood what it means to face Jewish guilt).

I don’t mean to suggest that children should exercise free reign in the home. It’s not so endearing for a teenager to color on the wall or a toddler to clog the plumbing with his toys. Nevertheless, there is beauty in a small child’s innocence in making the walls his canvas. Maybe it is time to start laying picture frames around the wall art and to walk through the gallery of a child who is starting to understand the world.

Too soon, the day will come when you’ll be able to re-paint. The museum will be gone, but your child will forever remember how much you believed in him.

Daniella Guterman lives in West Hempstead, NY with her husband and children. She serves as a member of a community welcoming committee and runs a free lending library, for Jewish books, with her husband. Daniella and her family enjoy singing and playing music together, as well as discovering the natural hidden gems of Long Island. As a mother and middle school teacher, Daniella believes that it is best to approach life with a sense of humor. Daniella enjoys writing about parenting, education, personal growth, and food. She also likes writing song lyrics, fictional stories, and play scripts.

I am a Proud Middle Child

Three Small and Easy Changes to Add Positivity in Your Home

Don’t Flip Out: Choose to See the Good in Your Child
The 21st President of the United States: Failure or Inspiration?
Hiding Their Jewishness
The Jewish Pope: Following the Questions Home
Comments