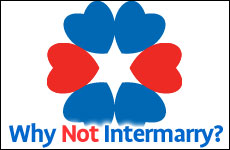 Your grandmother would turn over in her grave!

It's forbidden by the Torah!

These are some of the more common arguments against intermarriage. But these are negative, guilt-inducing reasons, and they rarely work.

Perhaps a more effective approach is the rational, practical view.

There's a video put out by the Reform Movement of America, called Intermarriage: When Love Meets Tradition. It's a real-life documentary that depicts a series of group therapy sessions for intermarried couples, designed to help them deal with the challenges of intermarriage. None of the couples are religious, but the video shows how ― surprisingly ― the major obstacle in their marriage is the issue of religious identity.

Esther Perel, a therapist who counsels interfaith couples, says in New York magazine: "The difference isn't just between Moses and Christ. You're dealing with issues of money, sex, education, child-rearing practices, food, family relationships, styles of emotional expressiveness, issues of autonomy ― all of these are culturally embedded."

These problems often come to the fore during lifecycle events. In the Intermarriage video, a Jewish woman says: "Our marriage was going smoothly until the birth of our baby boy. I was thrilled and wanted to arrange for a Bris (circumcision). But my husband thought I was crazy and said, 'I won't allow that bloody, barbaric cult ritual.' Instead of celebrating the birth of our child, we were having a terrible fight. He finally agreed to a Bris, on condition that the baby be baptized. I was shocked. Now I'm not sure our marriage is going to survive."

Egon Mayer, a professor at Brooklyn College who studies interfaith issues and published a study linking intermarriage with higher divorce rates, said : "When you bury something that is really important to you, all you're doing is building up a kind of pressure within the family relationship, which becomes a source of tension, which ultimately becomes a time bomb. If there's any reason why intermarriages break up, it's because of that time bomb."

One of the most challenging aspects of intermarriage is raising children. Many intermarried couples say: "We're going to let our children choose their own religion. When they grow up they can choose what they want. That way they'll get the best of both worlds."

The reality, however, is that children of intermarried couples frequently suffer an identity crisis. Jews often look at these children as non-Jews, and non-Jews look at them as Jews. One set of grandparents has a Christmas tree, the other a Chanukah menorah. This is all very confusing for a young person trying to forge an identity in an already-complex world.

Children need to have a solid, unambiguous identity which gives them a place in the world. They need a spiritual tradition through which to experience lifecycle events, and to have a community where they feel at home.

Psychologists report that many "dual-religion" children express anger at their parents for putting them in the middle of an issue that the parents themselves could not resolve. When a person has to choose one religion over the other, there is always the subconscious sense of choosing one parent over another.

Even when the non-Jewish spouse agrees to "raise the kids as Jewish," that only works as long as the couple stays married. In the event of divorce, custody issues become a huge challenge. I know of many cases where ― following a divorce ― the non-Jewish spouse simply reverted to raising the kids in a fully Christian lifestyle.

Complicating the issue is what happens in the event that the child grows up to strongly embrace religion. If he turns to Judaism, he'll disrespect his parents for having intermarried. And if he becomes a believing Christian, he'll think the Jewish parent is destined to hell for denying the faith.

Beyond this is the issue of the husband or wife experiencing his/her own spiritual awakening. Young adults who do not profess a belief in any particular religion often turn to religion later in life. A Gallup Poll showed that during an average lifetime, religious commitment is lowest from ages 18-39 ― precisely the time when people are making their decision about who to marry. I have a folder of emails from intermarried people whose lives turned to horror when they (or their spouses) turned back to religion. In such a case the issues are insurmountable.

A related scenario is where an intermarried spouse wants to explore his/her own religion, but holds back from doing so in order not to drive a wedge into the marriage. This inevitably leads to spiritual frustration and resentment toward the spouse. Many intermarried people have told me with great sadness, "I would like to be doing more Jewish things, but my spouse would never allow it."

This is not to say that all intermarried couples are unhappy. But if you would ask their advice, they would almost unanimously agree that with all things being equal, it's better to look for a partner with the same religious background as yourself.

One consequence of intermarriage is that it is often the first step to total assimilation. Studies show that 92 percent of children of intermarriage marry non-Jews, effectively detaching themselves forever from the Jewish people. In other words, intermarriage threatens Jewish survival.

Jewish survival is not merely an ethnic issue, but also a moral issue, because the Jews are not only an ethnic group, they are a moral force. The values that the civilized world takes for granted ― monotheism, love your neighbor, peace on earth, justice for all, universal education, all men are created equal, dignity of the individual, the preciousness of life ― were all revolutionary ideas taught by the Jewish people.

The Jews as a moral force continues to this day, as indicated by the disproportionately high number of Jews in charities and in causes of social welfare, from civil rights to feminism. As Rabbi Nachum Braverman explains, this is not to say that only Jews are capable of conscience or of goodness. It is to say that of all the nations throughout world history, only the Jews have defined their national mission as bringing moral clarity to the world.

Generation after generation of Jews understood the power of that mission, and the deep personal dividends it provided. This explains why ― even in the face of terrible persecution ― they clung with such loyalty to the Jewish people.

Yet there is no way to understand the riches of Judaism based on a "Hebrew School" education. Before deciding who to marry ― the most important decision of one's life ― it makes sense to find out what's been driving the Jewish people to greatness the past 3,000 years. Here are four suggestions:

As the saying goes, have the family jewels appraised before you sell them forever.

In the face of these arguments against intermarriage, many people will say, "Love conquers all." Actually that is not true. Love is open-eyed; infatuation is blind. If you think love will conquer all, then you are infatuated. The foundation of a good marriage is shared background and goals, which helps the love in a marriage grow stronger over time. Otherwise, the love will dissipate amidst various pressures and challenges.

Unfortunately, when a couple is in love, the rational perspective can get clouded by the powerful physical attraction. That's why, in considering intermarriage, the best advice is to have a three-month trial separation. This means a complete separation with no communication. Spend the time investigating Judaism and pondering the question: "Do I need to be married to this person to find happiness in life? Without that trial separation, it is impossible to have clarity about the right thing to do.

Those who cannot handle a full separation should at least agree to no physical contact for three months. See the real person and deal with him/her on a level unencumbered by the physical involvement. If even doing this is too much, then chances are this relationship is based on infatuation and that means it is weak at the core.

In contemplating intermarriage, it is crucial to take some quiet time and ask the following questions, developed by Rabbi Kalman Packouz, author of How to Prevent an Intermarriage. Answering these questions honestly should help set a clear path.

•  All things being equal, would you prefer to marry someone Jewish?

•  What are some of the differences between your family and your potential spouse's family?

•  Does your potential spouse want to observe any of the non-Jewish holidays? How do you feel about this?

•  Would your potential spouse want any symbols of their religion in your home? How do you feel about this?

•  Do you feel proud when you hear about the achievements of other Jews?

•  When there is a terrorist attack in Israel, do you feel connected to the victims? Does your potential spouse share that feeling?

•  Do you have an emotional reaction when you hear an ethnic joke putting down Jews, or hear the words "Hitler" or "Nazi"? Does your potential spouse share that feeling?

•  How will you feel if your non-Jewish spouse surprises you by deciding to raise the children according to their religion?

•  Does your potential spouse or their family dislike Jews in general, but feel that you are different than most Jews?

•  Does your physical attraction for this person perhaps prevent you from being aware of problems which may cause difficulties later?

•  Are you afraid that if you do not marry this person you will have a hard time finding someone else to marry?

•  Given all the challenges, would you be better off looking for someone else to marry?

This is not a guilt-trip. This is an issue of practical reality. Marriage needs to be a partnership to grow, work together, and weather the tough times. Marriages are so fragile these days, that it's illogical to choose a relationship with built-in problems of such magnitude. It is a documented fact that intermarried couples have a higher divorce rate, estimated at 70 percent. Would someone ever consider going into a business with a partner who carries this risk of failure?

Every Jewish soul has a Jewish soul mate. There are many avenues to meet that match. Marrying the right person is largely based on the effort we make. Do some networking, inquire about Jewish singles programs in town, and post a profile on jdate.com.

It is possible to "have it all" ― a wonderful committed relationship, free of built-in liabilities, and a Jewish life with Jewish children. Why settle for anything less? 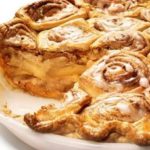 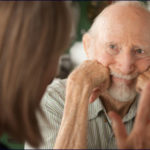 Alzheimer’s and the Here and Now3 min read

Dating Maze #226 - Getting Over the Past4 min read