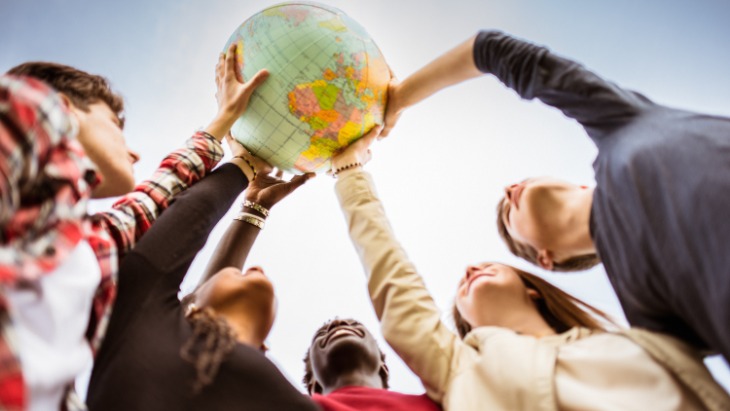 Amid all the bad news, we are living in the best era our species has ever known.

"All things considered," the British polling firm YouGov asked 18,000 adults in 17 countries a few years ago, "do you think the world is getting better or worse, or neither better nor worse?"

It wasn't close. Two-thirds of the respondents answered that things are getting worse. In most of the countries surveyed, the percentage of those who believed the world is getting better was in single digits — 8 percent in Denmark, 6 percent in the United States, 3 percent in France and Australia. Only in China did more people express optimism than pessimism.

It's an old story: Most people think the world is going to hell in a handbasket. Ask them about their own lives and they tend to be optimistic, but when they're questioned about society at large, cognitive psychologist Steven Pinker observes, "they transform from Pollyanna to Eeyore."

Of course there's bad stuff in this world. Just open the paper or tune in to a news program, and you'll encounter no end of dismal and discouraging information. Poisoned politics, mass shootings, natural disasters, teenage suicide, rising antisemitism, refugee floods, social-media rancor, opioid addiction: Hate and fear and heartache have always been part of the human condition. But amid all the bad news, there's even more good news. Or there would be, if journalists were as inclined to report tidings of comfort and joy as they are to dwell on what's wrong.

Never have there been so many such tidings. Far from living in a uniquely awful era, we are living in the best era our species has ever known.

"If you had to choose a moment in history to be born," said Barack Obama in November 2016, "and you did not know ahead of time who you would be — you didn't know whether you were going to be born into a wealthy family or a poor family, what country you'd be born in, whether you were going to be a man or a woman — if you had to choose blindly what moment you'd want to be born, you'd choose now."

He was right. This decade, for all its sorrows, has been the best time to be alive. As Johan Norberg, Ronald Bailey, Matt Ridley, Gregg Easterbrook, and other economic optimists have documented, human beings have never been healthier, wealthier, and safer than they are right now. Those of us alive today, writes Ridley, "are living through the greatest improvement in human living standards in history."

Lives were longer. The average child born in 2019 can expect to live 72.6 years, according to the UN Population Division. Over the past decade, global life expectancy at birth increased by three years; since 1900, it has more than doubled. Driven by better nutrition and public health measures, the rise in lifespan has come to seem inexorable. Over the past decade, writes Norberg, the average life span increased almost 8 hours per day.

More babies survived. Worldwide, the infant mortality rate has fallen each year for the past 29 years. We take it for granted that babies grow up, but for most of human history, parents routinely buried their children. That was true even of wealthy parents in advanced countries: 26 children of US presidents died before their fifth birthday. In 1990, 12.6 million under-5 children died. In 2017, the death toll was 5.4 million — a 57 percent reduction.

Extreme poverty retreated. In the mid-1800s, 90 percent of the world's people were mired in absolute poverty — i.e., they lived on less than $2 per day. For most of history, grinding poverty was the norm. No longer. By 2015, the absolute poverty rate had fallen below 10 percent. Last year it dipped to 8.6 percent. In raw numbers, the population living in extreme poverty plummeted from 1.9 billion in 1990 to about 710 million now — even as the world's population was increasing by more than 2 billion.

Middle-class comfort became typical. Though many still struggle with poverty and financial insecurity, a majority of the world's people no longer do. The 2010s saw the arrival of what the Brookings Institution dubbed "a global tipping point" — the moment when more than half of mankind had enough discretionary income to be considered middle-class or rich. The poor, astonishingly, are now a minority of the human race.

Nearly everyone learned to read. For most of history, most people could neither read nor write, and education was generally reserved for the elite. Our generation, by contrast, is the most literate ever: During the 2010s, the share of the world's people (age 15 and up) able to read and write surpassed 86 percent.

Girls were more educated than ever. Within living memory, girls in many countries received almost no education; today, girls get more classroom time than boys. According to UNESCO, the UN educational and cultural agency, the global average for girls' schooling in 2017 was 12.5 years. For boys, it was 12.4.

There was more food. Famine, a scourge of humanity since biblical times, is now virtually nonexistent. Over the past half-century, food production increased far faster than global population. As a result, global malnutrition is at or near an all-time low, and farmers complain of harvesting too much food.

The forests expanded. Though crops grew more abundant, the land needed to grow them shrank. "The 1.1 billion bushels of wheat the United States harvested in 1950 required 84 million acres," writes Easterbrook, yet "the 2 billion bushels harvested in 2015 required 55 million acres — nearly twice [the] yield from one-third fewer acres." With less land needed for farming, tree cover has rebounded. The Appalachian forest today is at its largest since Europeans first arrived in America. The 2010s saw forests "expand" in another way, too: In 2015, researchers from Yale definitively overturned the longstanding estimate that there were 400 billion trees in the world. The actual number, they showed, was an order of magnitude greater: There are 3.04 trillion trees on earth — 425 trees for every human being.

Additional examples of the decade's good news could fill another column: Falling homicide rates. Fewer deaths from climate-related disasters. The discovery of vaccines against malaria and Ebola. An unprecedented era of billionaire philanthropy. Near-universal access to electricity. The first photographs of Pluto and a black hole, among other scientific breakthroughs.

None of which is to deny the unkindness, suffering, and misfortune in the world — only to put it in perspective. In the 2010s, we were awash, whether we realized it or not, in tidings of comfort and joy. May the same be true in the 2020s.

The Origins of Antisemitic Conspiracies

The Difference between Success and Happiness
Scientific Curiosity and the Divine Encounter
Mind Over Milkshakes
Love the Convert
Comments
MOST POPULAR IN Current Issues
Our privacy policy
Aish.com Is Looking for Great Writers