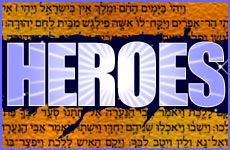 The Jews always honored their heroes, biblical or otherwise, without forgetting that they were human beings and subject to mistakes and failures.

Every nation and culture must have heroes to symbolize and inspire it. Sometimes when there are really no heroic figures present in a nation's story, they are then manufactured by legend or epic literature to fill that void. Roland, Achilles, Nathan Hale and the Unknown Soldier are but a few examples of this type of necessary hero creation. Most heroes, being only mortal, in reality have clay feet and thus are subject to debunking and the type of revisionist history that our modern professors and academicians so dearly love.

Early Zionist heroes from Herzl through Weizmann, Trumpeldor and even Ben-Gurion have had their heroic stature diminished by scholarly reviews and perfect hindsight second-guessing in recent years. Thus, to a great extent, the State of Israel is left with very few untarnished or even respected heroes. This is certainly a negative factor that can contribute to a nation's low morale and can create a depressing feeling of historical emptiness.

The Jewish people over the ages perfected a system that allowed for heroes to be appreciated, even if they were viewed as being imperfect or even badly flawed. The fact that all of our heroes were seen as human and that humans cannot escape error and sin allowed Jewish heroes to be portrayed accurately and yet retain their heroic stature.

The Bible is replete with examples of these types of heroes -- those who are not free of mistakes and tragedy and yet retain their place on a pedestal as heroes of Israel. The prime examples of this are naturally Moshe and David, but many others -- Gideon, Yiftach, King Saul and King Solomon, and the Hasmoneans in a later period -- fit into this category.

The Torah and especially the Talmud looks at people with a balanced view, factoring into its assessment of them the good and the better of their lives, personalities and their actions. Many times it is the sinner who repents and raises him/herself from that error that is viewed as being even more heroic than the righteous person who has not sinned. The Talmud assigns greater status in heaven to those who repent than to those who never sinned.

human hero accurately portrayed is much more valuable than an imaginary one who is perfect, infallible and a pure saint.

The Jews always honored their heroes, biblical or otherwise, without forgetting that they were human beings and subject to mistakes and failures. A human hero accurately portrayed is much more valuable than an imaginary one who is perfect, infallible and a pure saint. Everyone can identify with the former. With the latter, the hero becomes almost irrelevant to the life of the ordinary person.

The great Torah scholars of Israel almost always became folk heroes to the Jewish people. They were adorned with legend even during their lifetime and certainly after their deaths. The legends always emphasized their positive qualities, their good deeds and their great Torah knowledge. For example, Rashi, Rambam, Rabbi Yosef Caro, Rabbi Moshe Isserles, the Gaon of Vilna and the Baal Shem Tov and the record of their lives became the stuff of Jewish legend and hero worship. Their lives and accomplishments became the treasure of all Israel and in the dark night of the long exile of Israel their heroic presence in Jewish spirit and memory contributed mightily to Jewish survival. While later scholars may have disagreed with their interpretations of Torah law and even commented negatively upon actions taken in their lives, none of this somehow affected their status as genuine heroes in the Jewish world. Looked at in the whole and not picked apart minutely as is the current fad in academia, they emerged as legitimate human inspiration for generations of Jews scattered over the face of the earth.

Judaism does not canonize people as saints nor does it demand the performance of miracles from its heroes. But it does demand moral and observant behavior from its heroes.

This requirement of good moral behavior and the necessity of obvious repentance for a lapse in this area in order to be judged a Jewish hero is seen in the blessing that is recited before the Haftorah -- the weekly Sabbath reading from the Prophets which concludes the Sabbath Torah reading. The blessing reads: "Blessed are You, Lord our God, Who has chosen prophets who are good people..." There have been prophets to the world such as Bilaam who were not good people. In the past century a leading non-Jewish theologian was a notorious womanizer. This did not seem to affect his reputation as a leading theologian. We live now in a society that refuses to recognize that one's private life affects one's decisions as a public person. Permissiveness does not breed heroes and we are desperately in need of heroes.

Click here to purchase one of Rabbi Wein's books on Jewish History.