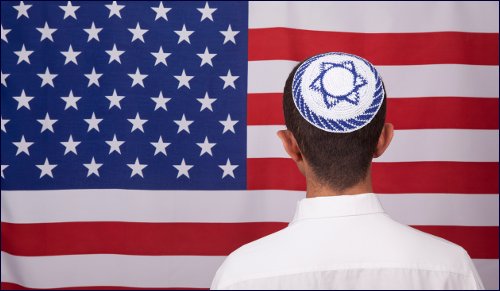 It’s comforting, now that America’s present is a sideshow of sound and fury and its future an uncertain spiral of fear and loathing, to lean longingly on the nation’s storied past and praise the people and the ideas that made America great to begin with. Anyone in the mood for such a journey should look no further than Rabbi Meir Soloveichik’s eight-lecture course “Jewish Ideas and the American Founders,” which is now available online.

Produced by the Tikvah Fund, Rabbi Soloveichik’s lectures, each clocking in at about an hour, may very well be the cure for the crassness corroding all talk of politics these days, and a reassurance, if one is still needed, that our common enterprise is about more than the trifles served up on cable TV and social media. Beginning with Jonas Phillips – a German Jew who arrived in America in 1756 as an indentured servant, earned his freedom, advocated for religious liberty, and founded one of the country’s earliest synagogues – Soloveichik tells a riveting tale of Jews being both the ger and the toshav, the stranger and the neighbor, distinct and yet profoundly at home in America.

It is tempting, in reviewing Soloveichik’s erudite and entertaining work, to trot out a few of the nuggets he dissects in his lectures, from Phillips’ letter to a Dutch friend during the American Revolution, intercepted by the British and taken for secret code because it was written in Yiddish, to Thomas Jefferson and Benjamin Franklin’s proposals for a Great Seal featuring not an eagle but Moses and the Israelites crossing the Red Sea. But to do so would be to miss the larger point of the exercise: The lectures may cover the period between, roughly, 1736, the year Phillips arrived in America, and 1826, the year of Jefferson’s death, but the wisdom they impart is very much designed as a blueprint for the American present and future.

Rather than just tolerate the Jews as another religious minority, America’s Founding Fathers were profoundly inspired by Jewish ideas, from the biblical reservations about the expansive rights of kings to Judaism’s core idea: divine election. They erected their new republic accordingly, understanding liberty not as an individual license for each of us to pursue his or her bliss but as a collective commitment to a greater good under the watchful eyes of God. Using the Jewish wedding ritual as metaphor – Benjamin Rush, a signer of the Declaration of Independence, attended the wedding of Phillips’ daughter Rachel – Soloveichik reminds us that the coming together of two people, like the coming together of a nation, is both a contract and a covenant, an acknowledgment of difference that also serves to seal a union.

Today, sadly, these ideas are everywhere under attack. On the left and on the right, freedom is seen as an invitation to indulge in solipsism. Identity politics looks askance at covenants, not to mention providence, seeing both as tools designed to oppress individual rights. Zealous proponents of unfettered markets similarly place their faith in the maximization of profit, not mutual responsibility. And the idea of chosenness, if it is discussed at all, is most likely sneered at as a perilous invitation to dominate, not an injunction to reach for a better self. In short, ours is rapidly becoming a nation the men and women Soloveichik so lovingly brings to life in his talks would not have recognized. The times, as another Jew who greatly influenced the spiritual evolution of America so beautifully put it, they are a-changin’.

How to navigate such transformations? Herein lies the secret chord in Soloveichik’s symphony. That feeling of uncertainty, he subtly reminds us, is anything but new. In fact, it’s been here at least since Jonas Phillips set foot on American soil and set out to make a life for himself and his family from the double helix of national and religious fidelity. Rather than see their otherness as a barrier and advocate for a sheltered life apart, America’s Jews were moved by it to remind their non-Jewish friends and acquaintances that difference was precisely the point, and that no matter how divergent Americans may be in their beliefs, they are united by their faith in their exceptional nation.

In an age of no-fault divorce, it’s an essential reminder that Americans have many reasons to stay together.

In an age of no-fault divorce, it’s an essential reminder that Americans have many reasons to stay together. It’s also an invitation to continue to work, as Phillips and so many other American Jews building a home in America did. This argument will probably not convince those for whom there’s little to the idea of America but recollections of past sins – some very real, others imagined or overblown – nor those for whom the great good always lies elsewhere, in a global comity that transcends and defies the very idea of the nation-state. But anyone still inclined to heed Langston Hughes’ call and let America be America again should pay close attention to Soloveichik’s wisdom. Take it to heart, and an action plan begins to reveal itself.

American Christians, long feeling ill-at-ease in a culture progressively mistrustful of religion, don’t have to retreat, as some recent thinkers have suggested, into cloistered communities far from the madding crowd; instead, they should come to see themselves as American Jews always had, as both strangers and neighbors, simultaneously bound to and different from the rest of the nation. And they – and we with them – should see religious liberty not as something to be tolerated but as a sacred cause, helping each other to defend our differences whenever they are called into question or come under attack.

Above all, however, this new plan of action is a call to remember that the freedom America offers us all is the freedom to come together, not the freedom to stand apart. It’s always been that way, and if we want there to be an America centuries from now, we should fight to make sure it remains this way still. It’s not too much to hope for. At the end of his stirring last lecture, Soloveichik tells the story of John Adams and Thomas Jefferson, both lying on their deathbeds on July 4 of 1826. Unaware that his friend and rival had already passed away, Adams’s last words were “Thomas Jefferson still survives.” He wasn’t wrong, Soloveichik explains: The man might’ve passed away but his ideas, the ideas that shape America, live on. The same is true of Jonas Phillips and all the others, Jews and non-Jews alike, who feature in Soloveichik’s talks. All still survive. As we peer into an unknowable and tumultuous future, we could ask for no better guides.

The Burka Ban and Us

Four Strangers, Three Faiths and One Extraordinary Escape to Freedom
Were Adam and Eve Jewish?
How I Learned to Love the Multiverse
10 Big Jewish Inventions
Comments