Thinness: We’re Just Not That Into You 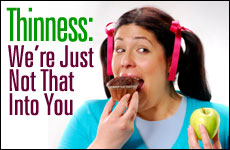 Fewer Americans are dieting now than in recent years. If you ask me, that’s very healthy.

“How’d you like to join our weight loss competition?” my chiropractor asked me yesterday, even though I was wearing one of my most slimming outfits. Isn’t it enough that I fork over oodles of money to this guy year after year, and that he drives a way nicer car than I’ll ever have? Do I have to start competing with other patients in a race for thinness? I thanked him for offering to help me avoid the physical cliff in the New Year, but declined.

Why is my chiropractor offering to help me avoid the “physical cliff”?

This sort of behavior is rampant in January, the month that spooks people into official Diet and Fitness Resolution Season. Sure, I could stand to lose some weight, and I plan to. Just like last year. And the year before. However, as someone who has squandered an embarrassing amount of my life’s energy worrying about my weight or experimenting with absurd diet lunacies, such as the egg and tomato diet, the all-the-carbs-you-can-eat-in-an-hour diet, and the morning papaya-wheatgrass smoothie diet, I no longer let the calendar taunt me into reckless behaviors such as group weight loss competitions.

In fact, I am supremely delighted that even in January, there is a slate of good news for those of us who are of huggable proportions. First, the greedy, exploitative diet-industrial complex may finally be shedding some of its influence. Researchers at The NPD Group, an outfit that has nothing better to do than to track Americans’ dieting habits, have revealed that the percentage of adults on diets is falling faster than a soufflé rushed from the oven into the cold winter air. Only 20 percent of American adults reported dieting in 2012, down from a peak of 31 percent in 1991. More women are giving diets the boot than ever: only 23 percent of women claimed to be dieting – 10 points down from a decade ago. Hmmm. Could it be that more women have decided to just release their inner Buddhas, or have they made peace with their bodies as they are? Stranger things have happened.

Bless their hearts, The NPD Group also found that the pudgy are considered more attractive than they used to be. Today, only 23% percent of Americans agree that people who are not overweight look more attractive than those who are overweight. Back in 1985, 55 percent of Americans felt the same way. That’s a big fat change in how we perceive the plus-sized. Take that, Shape magazine!

And in another blow to dieting zealots, a new study published in the January 2, 2013 issue of the Journal of the American Medical Association concludes that the slightly zaftig among us – defined as having a body mass index (BMI) of 25 to 30, have a 6% lower risk of death than people whose BMI is in the normal range of 18.5 to 25. You know it must be reliable information, because the article includes the words “systemic” and “meta-analysis.”

I already knew this, which is why I never leave home without a little precautionary padding. How much post-graduate education does it take to figure out that in lean times, the ample-proportioned individual will outlast the size 0 who leaves you with splinters after she hugs you?

This is no license to go hog wild, you should pardon the expression. Obesity is very unhealthy, and a BMI of 35 or higher raises the stakes of an early demise by 29 percent. So beware of that big bowl of Chunky Monkey ice cream and the second helpings of potato kugel. (And certainly never at the same meal.) If you would like to know what your BMI is, you can ask your doctor. I wanted to know mine when I began “researching” my humor diet memoir, Till We Eat Again: A Second Helping, but I was too embarrassed to ask my doctor, so I paid a skinny woman at a diet center to pinch my body in several places with a pair of cold steel calipers. She pinched, wrote down some measurements, pinched some more, furrowed her brow, took out a calculator, and in the end was too embarrassed to speak the number, so she slipped it to me on a little piece of paper, as if it were a CIA secret that I needed to swallow after reading it. Even though I subsequently lost weight and two dress sizes I refused to have the number recalculated. There is only so much indignity a woman can take.

She couldn’t even say my BMI aloud, so she slipped it to me on a piece of paper.

Finally, this month an Israeli law goes into effect that bans too-skinny models. Brandishing the weighty weapon of the BMI again, the law requires models to prove they’ve held a BMI of at least 18.5 for three months before a fashion shoot or show. Translation: a woman who is 5'8'' tall can weigh no less than 119 pounds. Now I ask you, in the land of the deep fried falafel, should that be so hard? It also requires advertisers who “retouch” a model’s image so they look like 8-year-old boys to make it clear that they have manipulated those images.

Spain and Italy are also trying to keep models’ weights above starvation levels through the force of law. Even the French Parliament (yes, the French!) once tried to pass a vague bill that outlawed "publicly inciting extreme thinness." Now that’s a law I could get excited about – and I’d be willing to march in the streets with posters. In 2011, the UK banned a web-based ad that used a model with "highly visible" ribs, calling it "socially irresponsible." Gee, you think so?

Many in the fashion industry are skeptical that these new laws will work, but I hope they do. If more models were forced to eat a half-pound burger each week on a bun, with a side order of fries, maybe they’d stop looking suicidally unhappy when they skulk down the Milan or Paris runways.

It has taken me years – okay, decades – to forgive myself for not having the “ideal” figure and knowing I lacked the discipline to ever have one. It helped to have had the catharsis of writing a humor book about my dieting and exercise escapades, but even more, absorbing my Jewish values helped me understand that God gave me my body as a gift – even though I might have some quibbles with the packaging – to use to fulfill my potential in this life. I need to take care of it, exercise, and not stuff myself with food. But I have also found that my purposeful Jewish life, focused on mitzvahs and trying to focus on things of transcendent meaning, creates the kind of inner beauty and confidence that shines through. Building a sense of beauty from the inside out also helps withstand the temptation to reach for another helping of potatoes, or that big brownie at Kiddush.

Despite that nice little sermon which I believe with all my heart, many of you are still going to join the January stampede to slim down and firm up. You may even start measuring your protein on little scales. Before you begin, allow me to share some of my tips – based on decades of experience – to help you lose a few pounds, but, God forbid, not your sense of humor. They’re kind of like my Ten Commandments of Healthy Dieting…

Jewish Communal Traditions Under Quarantine
The Blue Beyond
Great Place to Live
Is Eating Supposed To Be Spiritual?
Comments
MOST POPULAR IN Jewlarious
Our privacy policy