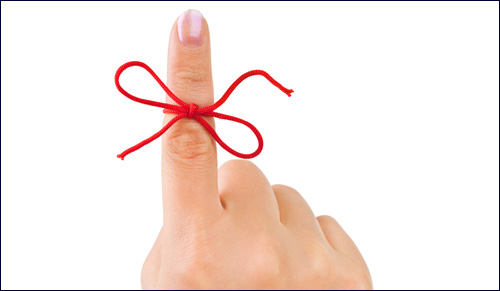 My memory is turning into a soft boiled egg.

We writers have unusual memories. With years of research findings tucked away, plus thousands of matchbook covers, gum wrappers, and critical drug instructions obliterated by “must-have-must-know” scribbled stuff, we’re determined to recall every scrap of minutia. In my case its Jewish minutia, from who invented the shopping cart, to the fact that the Lincoln penny was designed by a Russian-Jewish immigrant, Victor David Brenner (a fact that would’ve made me 250K richer on an episode of Who Wants to be A Millionaire. Oh, the ecstasy! Oy, the agony)!

Why is it that I can remember things that happened in 1959, no problem?

Naturally, I assumed I’d never have to sweat the Big Stuff, like who was Nixon’s first Vice-President, or every episode of Seinfeld. And then it happened.

A few years ago, my late husband and I were watching a Seinfeld re-run and we proceeded to have the following conversation:

Feeling desperate, I taped it, then showed it to our son who was reluctantly visiting – to do his laundry. We both pointed. He gave us the "glue factory" look, mumbled "Teri Hatcher," then disappeared, shaking his head, no doubt computing the relative cost of putting us in “the home” with or without indoor plumbing.

Whoever said we lose a trillion brain cells a second should add we lose them all the day we turn forty. Face it. When you’re donning an umbrella and acting out "Singing in the Rain" because you can't remember the word for "salt," you either have a tumor ... or you're getting older.

No doubt about it, I am leaking more brain fluid than a two month old on Enfamil.

Of course the uplifting news is, I can remember things that happened in 1959, no problem. Ask me the name of my kindergarten teacher, all the words to Venus, the entire cast list of Where the Boys Are and on which show Arnold Stang clucked, "What a chunk a chocolate ...!" But ask me to recall what I had for breakfast and I’ll play charades like a rabid mime or stare in a stupor until you lead me off – pointing.

Take, for example, Liam Neesan and Ralph Fiennes. Now I know they must be different. Both were in Schindler's List and sometimes even in the same scenes. But you could hold me hostage and I couldn't pick out Liam from Ralph. (Of course I had the same problem telling Al Pacino from Dustin Hoffman 30 years ago.)

As for the good girls. Fortunately, we solved the problem. We "simplified!"

We simply reduced all the Megs, Sharons, Michelles, Kims, and Heathers to "the blonde one."

You see, this is no mere boomer-harangue. Many Gen-X-ers often wonder what could possibly keep two tired Boomers together for over 25 years after they’ve witnessed, said, smelled and heard things that would drive any sane person to a cave in Sri Lanka.

This is why. I believe there’s a method to this biologically induced amnesia. The reason of course, has something to do with shared memories of labor rooms, diaper pails, ER's, spit-up, SAT's, death wishes – and yes, even loyalty and hopefully love. But there’s more.

Another reason we stay together is who else are we going to get to finish our sentences for us? Do you have any idea how much work it would be to break in someone new?

After my husband died, the problem has worsened.

I am now at the “it happens to us all stage” according to my doctor. Of course he told me I lost weight but failed to remember they forgot to actually weigh me. (He and I are two months apart in age.) I have yet to find my keys, credit cards, remember the name of the mayor, and how to get to my house … and am ODing on Gingko Biloba. And now there’s no one to “cover” for me when I think a Kardashian is brand of Turkish Taffy.

A few weeks ago I asked my friend if her one-and-a-half-year-old was talking yet, and she said no. “But he points.” That’s nice, I thought.

These days, I find the only people I can commune with are Boomers who know that a mu mu isn’t the sound a cow makes – or my neighbor’s toddler – the Pointer.

So, on behalf of all the Boomers whose memories are turning into soft-boiled eggs, I wrote a letter to Technion, Picture it. A Google microchip we can attach to our heads where all we have to say is: “You know the song. It’s got the word ‘love’ in the title.” And BOOM! A nice voice (think Dr. Ruth) a) asks for a more thorough description, taking you through the circuitous route of the mature brain, such as: “Was it before 1948 or after, darling?” “Does it rhyme with a household item?” b) then narrows it down like they narrow suspects in Criminal Minds and gives you a list, which you can then print out on a special device that can read the microchip.

Should there be any interest, put me down as the discoverer, at 50% of the net profits (I’m not paying for the company’s toilet paper) along with two dollars for every device sold, with a hold harmless clause (should some yutz glue it to themselves accidentally), and … Some things a Jewish maidel never forgets!