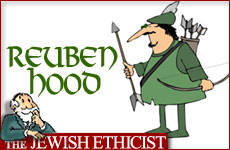 Judaism commands the rich to help the poor, but doesn't condone the use of force or fraud.

Q. Is it ethical to steal from the rich to give to the poor?

A. Many of us grew up with the romantic figure of Robin Hood, played by dashing actors from Douglas Fairbanks through Errol Flynn and right up to Russell Crowe. The audience cheers on Robin and his band as they succeed in outwitting and outfighting the corrupt nobility and clergy, and in stealing their wealth and distributing it among the poor.

Notwithstanding Robin's good intentions (not to mention archery and swordsmanship) and the despicable corruption and exploitation of the upper classes of medieval England, Jewish ethics cannot condone stealing from the rich to give to the poor. Jewish tradition is far more solicitous of the poor, and far more successful in advancing their wellbeing, then feudal England, but I don't know of even one Jewish story glorifying a Robinesque character who uses force in this manner.

In the era of the Jewish prophets, we do often find a nobility and a clergy who were insensitive to the plight of the poor. The prophets were tireless in preaching the importance of caring for the needy, in condemning the greedy and in lobbying for legal reforms that would benefit the poor. What we do not find is that they engaged in or even condoned the use of force or fraud to attain this aim.

In rabbinical times, we find the same ideals expressed. A midrash scorns the "dukes and governors who go out to the towns and steal and despoil, and when they return they say, brings us poor people that we may support them!"(1) Charity collectors are not only forbidden to steal, they are even forbidden from accepting donations when these have a high likelihood of being from stolen funds. (2)

What is sanctioned in Jewish tradition is to urge and cajole individuals to fulfill their charity obligations. In some cases where their stinginess is particularly egregious it is permissible to use strong language – but only in private, or in scolding generally those who don't fulfill their charity obligations. We never publicly shame an individual because of lack of generosity. (3)

Moral suasion and prophetic inspiration may be less exciting than swashbuckling, but these are the tools with which the Jewish people have created a genuinely compassionate society.

The Jewish Ethicist #3 The Upshot on Downloading MP3s

The Jewish Ethicist - Flawed Freebies
Would You Rather Be Right or Happy?
Korach’s Unique Punishment
Who Was Josephus? The Controversial Backstory of the Famed Historian
Comments
MOST POPULAR IN Current Issues
Our privacy policy