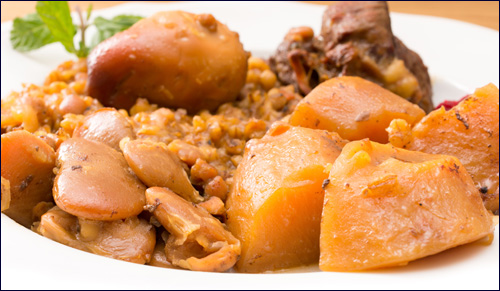 Traditional and exotic recipes for this genuinely Jewish dish.

What makes a recipe authentically Jewish?

It’s not a simple question; Jews are known for adapting their cuisine from the various countries they have lived in.

But there is one dish that many identify as genuinely Jewish – the iconic Shabbat Cholent. 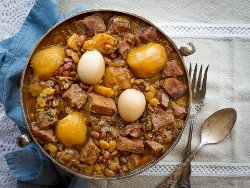 Why cholent? Because cholent was born out of need.

The Torah asserts that we are not allowed to kindle a fire on the Shabbat (Exodus 35:3). In addition, cooking is among the 39 categories of work not allowed on Shabbat.

Because of this, the Jewish community had to become creative with their cooking on Shabbat. There’s an added benefit too. It’s a mitzvah to delight in the light of Shabbat. How better to do this then with a hot meal shared with family and friends!

Cholent’s origins are from the Middle East. From there it spread to North Africa, and by the 9th century, it was already found in Spain. In time, it made its way to Eastern Europe. (1)

Ashkenazi-style cholent was first mentioned in 1180, in the writings of Rabbi Yitzhak of Vienna. Before the birth of electricity in Europe, a pot with the collected, uncooked ingredients was brought to the local baker before sunset on Fridays. The lids of the pot were sealed with a paste of flour and water to ensure proper cooking.

With the baker’s oven fired up, the pots found a home. Nothing was disturbed until the next midmorning, when the baker would open the door and give the still-hot pots back to the families on their way home from Synagogue.

The same practice was observed in Medieval Spain, Morocco, Tunisia, Algeria, and Uzbekistan where black pots of Adafina, Scheena, D’fina, and Bokla, respectively, were placed overnight in the baker’s ovens.

The different components in this overnight stew are a reflection of the Jewish geography they originate from. For example, the Moroccan Scheena is often made with chickpeas, rice or hulled wheat, potatoes, meat, and whole eggs, while the Tunisian D’fina often incorporates lamb’s feet and cardoons, a relative of the artichoke.

Before the “slow cooking” style became all the rage, we had our cholent……and whatever style of cholent you choose to cook, you will no doubt appreciate the glorious scent that will encircle your home. For this is the aroma of Shabbat….and this is the aroma that our people have come to love and cherish throughout the ages.

Sauté the rice in a small skillet, for three minutes, with a tablespoon of oil, stirring constantly. Wrap the rise loosely in cheesecloth and set aside. In a large skillet, sauté the meat and onion in the remaining 2 tablespoons of oil until browned, approx. 10 minutes.

Put the chickpeas and dates in a deep lidded pot, Dutch oven, or crockpot.

Place the meat and garlic head on top. Put the rice, in its cheesecloth, on top of the meat. Arrange the eggs in their shells on top of the rice. Top with both kinds of potatoes. Add the salt and pepper, and enough water to cover the ingredients.

Bring to a boil, simmer for 15 minutes, cover and remove from stove.

Place in a crockpot on low and cook overnight.

To serve, separate the contents, placing the eggs in one dish, the rice in another and the potatoes and meat in another.

In a heavy Dutch oven, sauté the onion and garlic in olive oil until lightly golden. Add meat chunks and continue to sauté the meat.

Add the cracked wheat which you will have checked for pebbles, etc. and rinsed in cold water and drained. Add spices, harissa, and chunks of carrots and celery and cover with water to about 2" above the contents of the pot.

Bring to a boil and simmer for at least 1 hour, until most of the water has evaporated.

Just before Shabbat, transfer to a crockpot on low. Check the water level, and add some more if needed and let it continue to cook overnight.

The night before you prepare this dish, put all the beans in a large bowl and cover with cold water. Allow to soak overnight. Before cooking, drain beans and discard any stories and dried-out beans.

Bring cholent to boil. Add tamari and bay leaf and simmer for at least one and a half hours. Add water when necessary, making sure water is one inch above ingredients. Place on blech before Shabbat. Keep pot tightly covered.

Variation, substitute one pound veal and one pound flanken for the chicken.

Heat olive oil in a large pott and sauté onions for five minutes or more until translucent. Add the remaining ingredients and continue to sauté until slightly browned.

Add 4 cups of boiling water and cook, covered, on low heat, for about one and half hours. Add water if necessary (the cholent has to be covered with a layer of liquid in order for it not to dry out overnight)

Place on Shabbat hotplate (blech) or place in a crock pot on low until lunch is served.

Recipe from The Seven Fruits of the Land of Israel, Chana Bracha Siegelbaum, 2014

3 Delicious Side Dishes for Passover

A Taste of Tradition

Eating According to Seasons
Lessons from the Book of Jonah
Where Are We? The Body, Brain, Soul Problem
Dr. Sheila Nazarian’s Escape from Iran
Comments
MOST POPULAR IN Family
Our privacy policy
Aish.com Is Looking for Great Writers