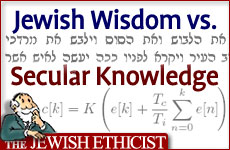 What's the difference between the two?

Q. What does Judaism say about our culture's tendency to make heroes out public intellectuals?

A. Last week we discussed the popular tendency to idolize performers. Based on a discussion in the Talmud, we concluded that there is a fine line between idolization and idolatry. The sages of the Talmud had a very suspicious attitude towards sports and cultural performances.

By comparison, the ancient Jewish sages had a great admiration and acknowledgment of secular wisdom. However, even here they knew how to draw the line between respect and veneration.

In the last chapter of the tractate Berachot ("Benedictions"), the Talmud discussed the various benedictions recited when we see remarkable sights or individuals. There we learn:

While the blessings are superficially similar, the commentators draw our attention to two subtle differences:

On a Torah scholar, we say that God "shares" His wisdom. Even as the Torah scholar has acquired divine wisdom, it is never separated from its source in God. But regarding secular wisdom, we say that God "gave" of his wisdom: God is the creator of the world and of human society, so the laws of nature and of social science also originate with Him. But human beings can grasp these truths even when they stand on their own, when they are no longer associated in our consciousness with their Author.

A Torah scholar is referred to as one who "fears Him". A secular scholar is merely "flesh and blood". This expresses another difference between the two kinds of wisdom. Torah study does not merely fill up a person, like a liquid fills a receptacle. A person's personality, even identity, both precedes and follows it. It is impossible to acquire Torah insight without a basis of piety, without fearing God and acknowledging that He is the Author of the Torah. Furthermore, the study itself doesn't leave a person unchanged but rather deepens his sense of awe. So when we see a Torah scholar, we can be sure that he is a person whose whole character is defined by his learning. By contrast, a secular scholar can obtain so much knowledge and understanding that he is an object of blessing, yet in terms of character be the same as the rest of flesh-and-blood humanity.

Of course the two differences are closely related. It is because Torah wisdom remains intimately connected to God that a person cannot acquire it without being a Godly person. Secular wisdom originates with God, but since He parts with it, it can adhere in discerning human beings, who may or may not be God fearing.

We may infer that the same distinction applies to one who wants to acquire each kind of wisdom. The Torah scholar owes his wisdom to its ongoing connection to God; likewise, we can acquire the wisdom only through a personal connection to the scholar. But secular wisdom can be acquired without necessarily having any emotional or spiritual connection to the person who transmits it.

We saw last week that while entertainment does have some legitimacy, fundamentally Judaism has an attitude of suspicion towards it. Not so secular wisdom, such as mathematics or science. Jewish tradition cultivates a deep respect for such academic attainments, so much so that for someone who has achieved a unique level of knowledge in these areas we make a special blessing, invoking God's name to express our admiration for the great level of knowledge God has granted this scholar.

But even here there is a clear distinction. For a secular scholar, we have admiration – we are moved by his great achievement to thank God for enabling him to accumulate such great and useful knowledge. Only for a Torah scholar do we have veneration – acknowledging that his wisdom is still intimately bound up with the One who created and bestowed it.

The Jewish Ethicist: Entitlement Vs. Charity

The Jewish Ethicist: Failing the Grade
Bechukotai 5782: Divine Retribution
Behar 5782: Working to Live or Living to Work?
The Wholeness of Being Broken
Comments
MOST POPULAR IN Current Issues
Our privacy policy