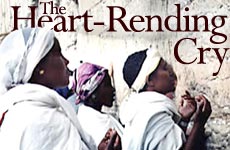 How is it possible to mourn something that happened 2000 years ago?

Every year when Tisha B'Av came around, I would have a certain dilemma. This is supposed to be a day on which we mourn the destruction of our Temple. It is a day when we do not eat, drink or wear leather shoes and follow varied and mourning customs.

Every year I would arrive at the synagogue to hear the Book of Lamentations, which bemoans the destruction of Jerusalem. However, every year I would end up daydreaming about totally unrelated things. As the cantor would be reading about the Temple, I would completely disconnect, planning my summer vacation, celebrating the end of my exams, or just hoping that the fast will go well this year.

It's difficult to be truly mournful over something that took place 2000 years ago – something that we've never seen and don't really feel lacking in our daily life. But all that was about to change.

As part of my army service in the Israeli army I was placed, to my delight, in a teachers' unit. I served at the Bat Hatzor caravan site located near Gedera. The site held 700 caravans, which housed thousands of new Ethiopian immigrants. In the mornings I taught immigrants at the Yad Shabtai School in Ashdod. In the afternoon and evening hours I served as a counselor on the site.

This was shortly after Operation Solomon in 1993, during which roughly 14,500 Jews form Ethiopia were airlifted to Israel. It was a special and moving operation, and the entire Israeli population was surprised to see that suddenly there were Jews walking around here who had, in fact, been severed from our nation many generations ago.

They observed Shabbat, were familiar with most of the holidays and kept Jewish tradition in a devout and traditional manner. But it was clear that they didn't know everything; the separation they had undergone throughout all those years had influenced their system of traditions.

They had never heard of Independence Day or Yom Yerushalayim, or even about Purim or Chanukah – none of the latter historical events that took place subsequent to their break-off from the Jewish nation.

I realized that unless I concentrate on filling these gaps of knowledge, their adjustment in Israel would never be complete. I decided to allot a considerable amount of time each day to teach them about Judaism.

Passover and Ascending to the Temple

The month of Nissan had arrived and I started teaching about the holiday of Passover. My class consisted of 20 students, grades 3-6. (They were placed according to their reading level rather than chronological age.) These children had come to Israel only a few months beforehand and more than anything else, they loved to hear stories, mainly because they didn't have to read or write in Hebrew which was still quite a difficult task for some of them.

My plan was to first connect Passover to the other holidays by very briefly reviewing the three major festivals during the year when the Jewish nation would ascend to Jerusalem.

"Today is the first day of Nissan and Passover is celebrated on this month," I began. "Passover is one of the three festivals when the entire Jewish people used to go to Jerusalem to the Temple."

"Teacher, have you ever been to the Temple?"

At this point, a student jumped up, cutting me off in mid-sentence. "Teacher, have you ever been to the Temple?"

I smiled at him, realizing that he was somewhat confused. "No, of course not. That was a very long time ago!"

My student was insistent, and a few more pairs of eyes joined him. "Fine, it was a long time ago. But were you there? Were you at the Temple a long time ago?"

I smiled again, this time slightly confused myself. "Doesn't he understand? Perhaps my Hebrew is too difficult for him, " I thought.

"No, of course not. That was a very long time ago!"

Now the rest of the students joined him in an uproar. "You've never been there?" "Teacher, what's it like being in the Temple?" "What does the Temple look like?"

I said these words over and over, having a very hard time believing that this was so strange for them to hear. What's the big deal? This is the reality with which we've all grown up. Why are they so bothered by it?

The tumult in the class was steadily increasing. They began talking amongst themselves in Amaric, arguing, translating, explaining, shouting, as I lost total control over the class. When the bell rang, they collected their things and ran home. I left the school exhausted and utterly confused.

The next morning I was hardly bothered by the previous day's events. In fact, I had nearly forgotten all about the incident. That day I had planed to just teach math, geometry and other secular subjects.

I got off the bus and leisurely made my way toward the school. As I neared the gate the guard approached me, seeming a bit alarmed. "Tell me," he said, "do you have any idea what's going on here today?"

I tried recalling a special activity that was supposed to be going on, or some ceremony that I had forgotten about, but nothing exceptional came to mind.

He didn't answer. He only pointed towards the entrance to the school.

I raised my head and saw a sizeable gathering of Ethiopian adult immigrants – apparently, my students' parents. What are they doing here? And what are they yelling about?

I went over to them, attempting to understand what was the matter from the little Amaric that I knew.

As I came closer, everyone quieted down. One of the adults who's Hebrew was on a higher level, asked me, "Are you our children's teacher?"

"Our children came home yesterday and told us that their teacher taught them that the Temple in Jerusalem no longer exists. Who would tell them such a thing?" He looked at me in anger.

Am I sure that the Temple was destroyed? Of course I'm sure!

"I told them that. We were discussing the Temple and I felt that they were a bit confused. So I explained to them that the Temple had been burned down thousands of years ago and that today, we no longer have a Temple. That's all. What's all the fuss about?"

He was incredulous. "What? What are you talking about?"

I was more confused than ever. "I don't understand. What are you all so angry about? I simply reminded them of the fact that the Temple was destroyed and that it no longer exists today."

Another uproar – this one even louder than before.

The representative quieted the others down, and again turned to me. "Are you sure?"

"Am I sure that the Temple was destroyed? Of course I'm sure!" I couldn't hide my smile. What a strange scene.

The man turned to his friends and in a dramatic tone translated what I had told him. At this point, things seemed to be finally sinking in.

Now, however, a different scene commenced: one woman fell to the ground, a second broke down in tears. A man standing by them just stared at me in disbelief. A group of men began quietly talking amongst themselves, very fast, in confusion and disbelief. The children stood on the side, looking on in great puzzlement. Another woman suddenly broke into a heart-rending cry. Her husband came over to her to hug her.

I stood there in utter shock.

I felt as if I had just brought them the worst news possible. It was as if I had just told them about the death of a loved one. I stood there across from a group of Jews who were genuinely mourning the destruction of the Temple.

A few months later it was Tisha B'Av. I had already been discharged from the army, on my way to college, and my military service seemed as if it had been such a very long time ago.

As I did every year, I went to synagogue. Everyone was already seated on the floor (as is customary for mourners), and I was waiting to hear the Book of Lamentations. I had expected, as in previous years, for this to be a time for some daydreaming and hoped I wouldn't get too hungry.

The megillah reading began, and I started reading the first two verses.

"Alas, she sits in solitude…like a widow…She weeps bitterly in the night and her tear is on her cheek. She has no comforter from all her paramours; all her friends have betrayed her, they have become her enemies."

Suddenly that first day of Nissan began replaying in my mind. The angry looks of those children. The parents' screams. The mothers' crying. The men's pitiful silence. The shock they were overcome with as they received the terrible news as if I had just told them about the death of a loved one.

At that moment, I understood.

We're supposed to feel as if something very precious has been taken away from us forever. We are meant to cry, to be shocked and angry, to break down. We are supposed to mourn over the destruction of the Temple, to cry over a magnificent era that has been uprooted from the face of the earth. The incredible closeness that we had with God – that feeling that He is truly within us – has evaporated and disappeared into thin air.

Now when Tisha B'Av rolls around, I go back to that incident with my students and their parents and try to reconnect to the meaningful lesson that they taught me – what it truly means to mourn for the loss of our holy Temple.

The Homeless Jew
Were Adam and Eve Jewish?
How I Learned to Love the Multiverse
10 Big Jewish Inventions
Comments