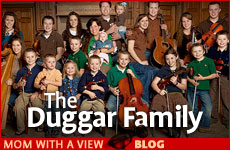 She's expecting her 20th child. Why all the vitriol?

I have been forced once again, by the outcry over the Duggar family pregnancy, to immerse myself in the murky world of Reality TV. I have never seen their show, 19 Kids and Counting, but I think I have gleaned the pertinent details. Michelle and Jim Bob Duggar have 19 children, one of whom is married with two children of his own.

Michelle recently said on The Today Show, while announcing her pregnancy to the national television audience, “There is always room for one more.” I respect and applaud this sentiment but I am apparently in the minority. Her revelation sparked so many hits (3,000,000) that they had to shut the site down briefly to prevent the server from crashing. There were 15,000 initial comments, most of them negative. The question is why?

To resolve this issue and try to understand why this family’s choices sparked such vitriol, The Today Show brought on one of their frequent commentators, Harriet Cole, as well as a licensed therapist, Hal Runkel. Their analysis was interesting and their responses were actually supportive of the Duggar family.

Is jealousy at the root of all the negativity?

Cole and Runkel suggested that perhaps jealousy is at the root of all the negativity. Here is a family that seems to be close. The parents appear to have a good marriage and there seems to be genuine affection among all the family members. The kids are well-dressed, well-mannered, they do their chores and they even play an instrument! On top of that, they are debt free (Jim Bob offered to make his financial secrets available to the current administration), and they home school their children (Okay, now I’m starting to hate her…).

Many people, posited the speakers, have only one or two children and aren’t doing a very good job of parenting them. Their family dynamic doesn’t come close to resembling the Duggar’s. They are frustrated and resentful and it’s always easier to attack than introspect.

Hal Runkel went on to reflect on the spoiled nature of children today. Their parents are obsessed with them, posting a picture on Facebook of every minor accomplishment and inadvertently creating a generation of self-centered, narcissistic children. The less intense focus that is the inevitable result of a large family actually leads to emotionally healthier children; kids that are more self-sufficient and have stronger self-esteem. They have a greater sense of responsibility and are unafraid of hard work.

Concerns were raised about forcing the older children into the position of raising their younger siblings. If this is what is occurring, then I share the concern. It is the parents’ choice to have more children and it is the parents’ job to raise them. But, if the expectation is, rather, just that the older children will help with the younger, will pitch in (in the Duggar system, even the smallest children have some chore), well, isn’t that what families do? Don’t we want our children involved in helping each other and giving to each other?

Harriet Cole asserted that’s the way families used to be. Is it perhaps a reflection of the breakdown of families and community that we no longer have these expectations, rather than a sign of progress?

What struck me was also the issue of choice. Isn’t that the most basic tenet of feminism – choosing whether to have your child or not, choosing whether to stay home or go to work? Many women recognize that for some, feminism has turned into careerism, embracing employment outside the home as the only acceptable “choice” and, subtly or not so subtly, sneering at those women who stay home or make having children and raising a family their career of choice.

The Torah praises giving when it is selfless. I think raising children is one of the most completely selfless acts you can do. It is not a project with a fixed beginning and end. You get no awards, plaques or raises. Your co-workers or underlings rarely applaud you! It requires a total subjugation of your own needs and desires in order to create the future. With no expectations (and certainly no guarantees!) of getting anything in return. I respect anyone who does this job well. And who, recognizing all the challenges involved, nevertheless proceeds to choose to parent over and over again. The ability to be a good parent and a good spouse while raising an extra-large family deserves our admiration, not our condemnation. If I was Oprah, I’d say “You go, girl!”

All the Lonely People