My Front Garden Is Not a Garbage Dump! 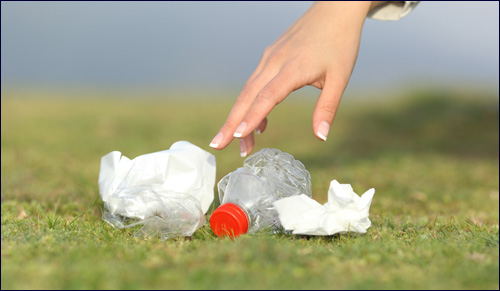 So why do people have no problem throwing their trash there?

The front of our house is covered with bushes. Some of our grandchildren think it’s a forest. It has a slightly (okay more than slightly) overgrown look and provides us with some privacy. Not only is our front yard like that but so is the property in the front of our house between the sidewalk and the street. It is full of succulents, hardy plants that require little water and seem to stand up to all adversity.

Except perhaps the onslaught from the humans walking by. Actually the plants can take it; it’s my husband and I who can’t. Every night after dinner we go for a walk. And every night after dinner we spend 5 to 10 minutes at the beginning or the end of our stroll cleaning out the garbage that people have thrown into our bushes – from cigarette butts to diapers to bags of doggy doo to plastic cups to soda cans – passers-by seem to treat our bushes as their personal garbage can.

We can’t understand it. We can’t fathom what goes on in their minds as they pick up after their dogs and then throw it into our bushes. What kind of person does that? Would they be upset if someone did the same to their property?

As frustrations go, this one is on the mild scale. It’s annoying because it’s so consistent and inconsiderate but it can be remedied relatively quickly with very little effort. What’s particularly troubling about it is what it says about the other people in the neighborhood (you know who you are!). What can we learn about someone who treats the property of others with such cavalier disdain? The answer is not a positive one. And it worries me. Because it demonstrates a complete lack of caring, a complete indifference to the needs of others.

All that counts in their mind is that inconvenience to carry this soda can all the way to the corner where there are garbage cans. Why should I make that minimal effort when I can just as easily dump it right here?

What kind of person says that to him or herself? Someone who only thinks about his or her own needs and concerns. Some who is selfish, someone who is indifferent.

It’s amazing; there’s so much garbage thrown into our bushes but we’ve never yet caught anyone doing it. Does that mean they still retain some slight embarrassment over their actions, that they aren’t 100% comfortable with their behavior? I hope so.

Grand gestures are easy; it’s the small seemingly insignificant ones that are the mark of the man – or woman. It’s the times we think no one is looking and that we imagine no one cares. It’s our responsibility to take care of our world and take care of each other. Those who toss their cups in our bushes are doing neither. And we are all paying the price.

Any ideas for a cute little sign to post to remind others that our bushes are not their private dump?

Family Gathering
G-d Time
Shavuot is The Holiday of Cheesecake and Blintzes
What Does Kosher Mean Literally?
Comments
MOST POPULAR IN Mom with a View
Our privacy policy