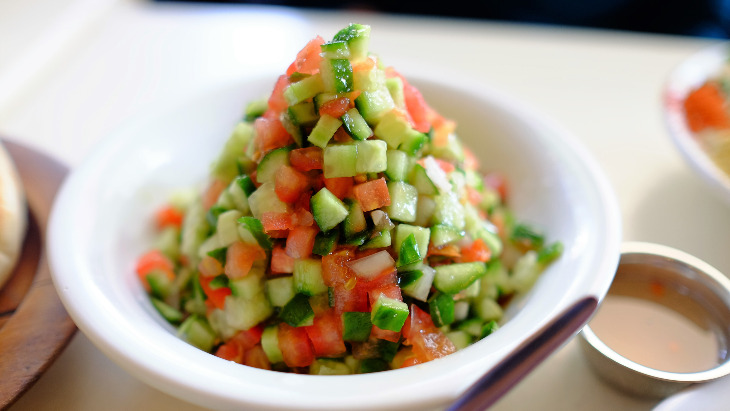 This ubiquitous salad captures the flavors of the Jewish state.

The ubiquitous “Israeli Salad” – Salat Katzutz (“Chopped Salad”) in Hebrew – is a tasty mixture of tomatoes, cucumbers and other ingredients – doused with fresh lemon juice – that accompanies any meal. It's scooped into pita along with falafel and shawarma. It’s served for breakfast, accompanied with cheese and eggs.

The origins of Salat Katzutz go back over a hundred years. Cucumbers have long been cultivated in the Middle East, but tomatoes are a New World fruit, originally found in South America. Food historian Gil Marks notes that Middle Eastern Sephardi Jews were the first to start cooking with tomatoes in the region: “No one more completely adopted the tomato early on than the Sephardim of the eastern Mediterranean.” They embraced tomato-based sauces and added slices of raw tomato to many dishes.

In the 1880s, when Jews began moving to the Land of Israel in large numbers, they embraced the popular local combination of fresh tomatoes and cucumbers. Gil Marks notes that Israeli Salad is similar to the Turkish salad known as coban salatsi, or Shepherd’s salad. “It soon became a ubiquitous dish in the communal dining halls of kibbutzim,” he notes. (Quoted in Encycolopedia of Jewish Food by Gil Marks: 2010).

“This salad, born as part of the famous kibbutz breakfast – eaten when the members had already spent several hours working in the fields and orchards – has become an Israeli classic,” observes Claudia Roden, another food historian. “It is always mentioned as one of the wholly Israeli foods, although every Sephardi community has a version. In the kibbutzim the ingredients are laid out for members to make up for themselves, and everyone takes pride in peeling, chopping, and dressing the salad in a way that is considered an art.” (Quoted in The Book of Jewish Food: An Odyssey from Samarkand to New York: 1996).

Israeli salad soon migrated to home kitchens across Israel. Chef Michael Solomonov, author of the cookbook Zahav: A World of Israeli Cooking (2015) notes that the 19th Century Jewish halutzim (pioneers) who moved to the land of Israel in the 1800s “literally made the desert bloom and helped establish Israel as the powerhouse in agricultural technology and productivity it is today.” The kibbutz’s hearty breakfasts were built around Israeli salad, augmented with cheese, yogurt, eggs and sometimes fish. Today, Solomonov notes, “there is no meal where Israeli salad is out of place at the table.” Serving Israeli salad is a quick and easy way to bring a taste of Israel to any meal – and a healthy and delicious way to enjoy vitamin-rich vegetables as well.

One of the reasons Israeli salad tastes so good in Israel is the freshness of the ingredients. In contrast, vegetables in the United States and elsewhere are often picked and packed far away and stored for many days before we eat them – and can seem bland and tasteless. So we'll need to make an effort to find fresh ingredients and to adapt our own Israeli salad versions to what’s most in season and available. The results can be delicious, no matter where you’re shopping and in what season.

Cookbook authors Einat Admony and Janna Gur, whose book Shuk: From the Market to Table, the heart of Israeli Home Cooking (2019) aims to help cooks recreate Israeli flavors, has some tips for finding flavorsome vegetables. “There’s no point in making Israeli salad from less-than-great vegetables,” they note. “Tomatoes are the most crucial. They need to be ripe and flavorful, but not so soft that they get mushy when you cut them. If you can’t find suitable full-size tomatoes try cherry tomatoes, which have a longer season and are usually sweet and firm.” When it comes to cucumbers, try looking for small Persian cucumbers, which are often sweeter and firmer than the longer English varieties available in many supermarkets.

Finally, it helps to get creative. The real fun comes in adding herbs and seasonings. When you’re shopping for ingredients, take a look at what’s fresh and consider incorporating new flavors and textures in your salad. Herbs like dill, parsley, mint or cilantro are great additions, as are vegetables like peppers, radishes, kohlrabi, pickled lemons or anything else that catches your fancy. Dressing the salad with lots of freshly squeezed lemon juice and high quality olive oil is key. Some chefs add spices such as lemony-flavored sumac or the Israeli spice blend known as zaatar. Some add tahini paste or cheese. Anything goes. The recipes below will help get you started and give you ideas of how to make a version of Israeli salad that’s your very own.

One tip: chop everything into very small, evenly sized pieces. In Israel, some people differentiate between salads that are katan (small – where everything is chopped to roughly a ½ inch size) and dak (very fine – where the vegetables are chopped smaller, more like a relish).

Combine all the ingredients in a large bowl. Toss well to combine and serve.

(From Zahav: A World of Israeli Cooking by Michael Solomonov and Steven Cook: 2015).

“I’ve probably eaten a chopped salad every day of my life,” observes Einat Admony and Janna Gur. Here is their easy version of a classic Israeli salad.

Put the tomatoes, cucumbers, bell pepper, carrot, onion, parsley, and/or mint in a large salad bowl and toss with the lemon juice and oil. Season with the sumac. Taste and season with salt and black pepper. Serve right away.

(From Shuk: From Market to Table: the Heart of Israeli Home Cooking by Einat Admony and Janna Gur: 2019.)

“When I hear the word ‘salatim’ (salads), I am transported to my Shabbos table…” observes Jerusalem-based food blogger Danielle Renov. Danielle likes to serve lots of different plates of various kinds of salad on Shabbat – including this version of her classic Israeli salad.

Place all ingredients into a bowl. Toss to combine.

(From Peas Love & Carrots: The Cookbook by Danielle Renov: 2020)

Cut all the vegetables into very small dice or pieces and put them in a bowl with the onions and flat-leafed parsley. Just before serving, dress with olive oil, lemon juice, and salt and pepper to taste.

(From The Book of Jewish Food: An Odyssey from Samarkand to New York by Claudia Roden: 1996.)

Create Your Own Israeli Salad 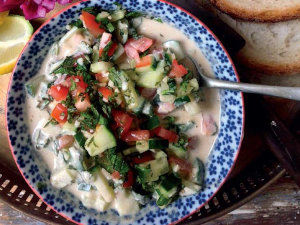 According to Israel-based cookbook author Adeena Sussman, “Israeli salad is little more than the best vegetables you’ve got, chopped up, and seasoned to taste with lemon juice, olive oil, salt, and pepper. The only two nonnegotiable ingredients are firm, crunchy cucumbers and juicy, ripe tomatoes.” Instead of offering a definitive recipe, Adeena suggests some possible add-ins, based on what’s available and fresh: “Add radishes, red onions, carrots, kohlrabi...whatever you desire, really, as long as it’s really fresh. Crunch is essential, and a bit of chopped fresh parsley is always a nice addition.”

Place the tahini and garlic in the bowl of a food processor. With the processor running, add the water in a slow stream and process until the tahini is light and fluffy, about 1 minute. Add the lemon juice and the salt and process for 30 more seconds. Stop the processor, taste the tahini, and add additional salt and lemon juice to taste. Stred in the fridge, tahini keeps for up to 1 week. When you take it out of the fridge, thin it with water or lemon juice and season with salt to brighten it up.

(From Sababa: Fresh, Sunny Flavors from My Israeli Kitchen by Adeena Sussman: 2019).

Share your tips for creating the best Israel salad in the comments section below. Enjoy, or as Israelis say: B'tayavon!

Wonderful Salads
Olivia Newton John’s Grandfather was a Nobel-Prize Winning Jewish Physicist
Don’t Believe in Other Gods Versus God is One
Seeing Without Eyes
Comments
MOST POPULAR IN Family
Our privacy policy
Aish.com Is Looking for Great Writers