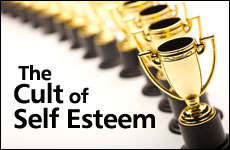 In real life, not everyone is a winner.

June isn't just a perfect time for weddings; it’s also the season for caps and gowns.

Our calendars seem to be filled with invitations to participate in the glorious moment of graduation for our children, as well as the progeny of our families, our friends and our loved ones.

Today the pomp and ceremony of graduations start with kindergarten. Every small step of maturation is accompanied by the pageantry of public rejoicing and the seemingly indispensable awards handed out for excellence in almost every imaginable category.

Who could possibly find any fault with these universal happy occasions filled with more and more opportunities to pay tribute to our youngsters?

Well, I don't want to sound like a grouch, but somebody has to point out one of the unfortunate consequences of what appears to be our unqualified – and very often our undeserved - outpourings of praise for our children.

It was a front page “think piece" story in the New York Times last week that led me to my conclusion. In a fascinating analysis of public response to current Broadway plays, Ben Brantley, the Times theater critic, bewailed the recent practice of standing ovations for any and every play, no matter what their merit.

What particularly disturbed him was, as he put it, that "We really reached the point at which a standing ovation doesn't mean a thing. Pretty much every show you attend on Broadway these days ends with people jumping to their feet and beating their flippers together like captive sea lions when the zookeeper arrives with a bucket of fish. This is true even for doomed stinkers that find the cast taking their curtain calls with the pale, hopeless mien of patients who just received a terminal diagnosis."

Brantley doesn't understand the phenomenon. Why do audiences who have every reason to demonstrate disapproval for an obviously inferior work rise to their feet as if they had just witnessed a masterpiece? Why must everything be acknowledged with the kind of praise that ought to be earned instead of indiscriminately granted?

I think one of the respondents hit the nail on the head. It isn't just something about our reaction to plays on Broadway. It's a far more profound reflection on an attitude that has become part and parcel of our culture, in particular with regard to the way in which we relate to our children.

In a letter following the appearance of the article, a reader offered the suggestion that it's actually the result of the "everyone's a winner" culture that infects our child worshiping society of "affirmation." If you don't praise every child to the skies, no matter how poor his or her performance, you are considered "overly critical" and "unsupportive." For more than a decade we've been guided by the mantra that what children need most is to be lauded for their effort; results don't really matter. Not strange at all then that this becomes our standard for other areas of life as well.

The truth of the matter though is that effort is bound to fail if every action is equally lauded. Why struggle to be better if even the mediocre is more than satisfactory?

There are school systems today which don't allow sports that keep score because no one should ever feel the bitter taste of being a loser. In similar vein, the new policy of many progressive educational institutions is to eliminate the selection of a valedictorian, to spare the hurt of any runner-ups for the honor who were unsuccessful in achieving it.

Everyone has to be a winner.

Winners are those who struggle harder.

I don't want my doctor to be someone who never took his work seriously but kept being passed - and even praised - just because he or she felt a calling to go to medical school. I want the people who I respect and who I need to help me by way of their professional expertise to have been judged, criticized, and evaluated by the tough standards that would make them competent to fulfill the demands of their jobs.

And I don't want my children to be rewarded unnecessarily to the point where they believe that everything is coming to them just because they're breathing.

I personally think parents share some of the blame when they make it clear that they take it as a personal insult if their "one and only" doesn't walk away with some kind of certificate of achievement at a graduation ceremony. Not everyone deserves a standing ovation. But those moments also serve as points of inspiration. They make clear what is possible for those who aspire to greatness. They indicate how life rewards those who achieve the maximum. And instead of "dumbing down" expectations by honoring everyone equally, we ought to take pride in the role models who deserve to be winners.

So my advice to all of this year's graduates is to be grateful for what they have accomplished, but at the same time to find inspiration from those who have done better. Success is achieved not by envying those with greater achievements but rather by emulating them.

And our role as observers ought to be guided not by constantly heaping undeserved honor no matter the effort, but rather of giving wise counsel and criticism until we create disciples who truly deserve standing ovations.