The Woman in the Burqa 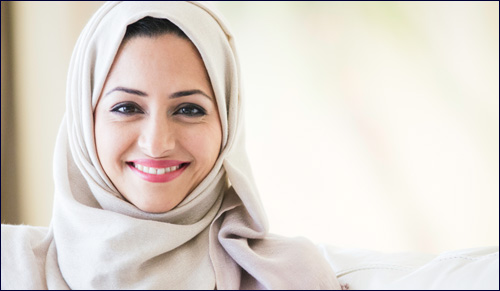 A true story for any Jew who ever felt their name was too Jewish or that wearing a kippah wasn't cool.

I haven't been on a college campus in a long time. Back when I was an undergrad, being Jewish didn't place a target on my head. Sure I had my share of arguments with folks who made some inappropriate comments and even a scuffle or two (or twelve), but anti-Semitism wasn't as prevalent and out in the open as it is these days.

Last month a college newspaper in California published anti-Semitic cartoons about Alan Dershowitz that mirror Nazi propaganda. Pro-Israel freedom of speech is squashed even by Jewish organizations such as the Princeton Hillel where an Israeli diplomat was blocked from lecturing (they later apologized, but still – how did it happen in the first place?). And then there are the cowards from BDS movements who engage in libelous and even physically-intimidating tactics to scare Jewish and pro-Israel students.

So when I was recently asked to speak to a group of American college students on a trip to Jerusalem, I wasn't surprised to hear that all had felt intimidated because of their faith. They had been shouted down in class, embarrassed for wearing their kippot, and even presented with "eviction notices" to leave their dorms.

It was time to make them proud again to be Jewish. To help them appreciate that they are part of the most wonderful nation in the world charged with the mission to bring light to the world.

Preparing for my talk reminded me of a unique case I had in my clinic. I am a clinical psychiatrist and work at an Orthodox Jewish treatment facility in Jerusalem; the vast majority of patients that I see are religious Jews. I am inspired every day by the faith of my patients under adverse circumstances. One day the name Fahima was on my patient list and I was very curious to see who would walk in.

A religious Arab woman entered my office with her infant child. While I was surprised to see a woman wearing a burqa in my clinic that mainly serves the Orthodox Jewish community, I was happy to provide the same high-quality of care to all.

Fahima told me an awful story of her husband's brutal temper and how he's broken her ribs after she returned from the hospital the previous month having delivered a girl instead of a boy. He had subsequently began drinking alcohol on a daily basis and would threaten her life throughout the night.

As we spoke, it became clear to me that making a diagnosis was less important than finding this young woman a safe haven from her increasingly-abusive husband. With her permission, I contacted the local welfare office and was able to schedule her an intake at a domestic violence shelter in the city.

Within an hour, a social worker from the city had arrived to bring her to a safe place. As the episode neared its closure, I couldn't help but to wonder what had brought Fahima to our clinic as opposed to any of the other facilities in the area. Luckily Fahima answered my question for me as she walked out the door.

"God bless you Dr. Freedman. I had nowhere to turn in my own village but I knew if I came to the Jews that they would help me. God bless you."

I was grateful for her blessing, and I felt proud. Not of myself of course – I had only done the simple and obvious thing of connecting a domestic violence victim with social welfare services – but proud of the Jewish people. Her words echoed in my mind, "I knew if I came to the Jews that they would help me."

For every Jew who ever felt that the name Goldstein was too Jewish or that wearing a kippah wasn't cool, I beg to differ. And for every Jewish comedian that seeks to belittle their heritage for a few cheap laughs, I'd offer a rebuttal: nothing should make a person more proud than being part of a people with a national mission to fix the world.

And that was my message to those college students. "But it's so hard," one them said to me.

“It’s true,” I replied, “but a little bit of light can chase away a whole lot of darkness.”

We Are One: Music Video

Ordained by the Holocaust

Ukraine and the Jews
The Softball Player
How This 6 Generation Bread Baker Brought Back Israel’s Ancient Grains
Olivia Newton John’s Grandfather was a Nobel-Prize Winning Jewish Physicist
Comments
MOST POPULAR IN Israel
Our privacy policy
Aish.com Is Looking for Great Writers