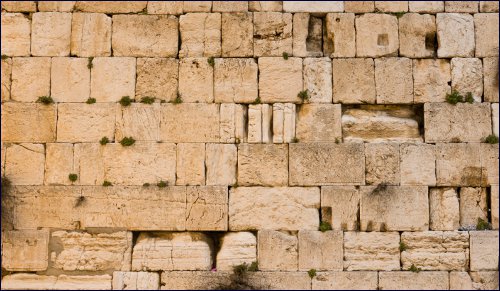 Do we take the Western Wall for granted?

It stands there silently, contemplatively, like a sentry guarding its post, projecting strength and a dramatic sense of history even as it invokes our deepest longings regarding Jewish destiny.

As the best-known site in all of Jerusalem, it is a symbol that resonates profoundly and sometimes inscrutably in the heart of all those who feel the softness of its touch.

Indeed, for those of us born after the miraculous events of the Six Day War, it is hard to conceive of a time when the Western Wall was defiled and unreachable, languishing despondently under foreign rule.

We visit it whenever we wish, free to recite any prayer, and to offer as much praise or shed as many tears as our hearts might desire.

Nonetheless, it was just 48 years ago today, on the 28th day of the Hebrew month of Iyar that this ancient relic of the Temple period was returned to our people, an event we now commemorate each year as Jerusalem Day.

But how much do we really appreciate and cherish the Wall? I hesitate to ask, but, do we perhaps take the Western Wall for granted? Of course, the Temple Mount, which sits above the Wall, is our holiest of holy sites, surpassing the Wall in significance. And we must work towards the day when we shall be free to ascend it in peace, unencumbered by political restrictions.

But has our unfettered freedom at the Wall below led us to lose our sense of wonder about this very special place? Consider the following. There is a Midrash in Bamidbar Rabba (11:2) where the sages, based on a verse in the Song of Songs, assert that "the Western Wall of the Temple will never be destroyed."

Here it is, erect in all its grandeur, defying history, humiliation and the odds, a physical testament to the Divine promises made to our forefathers so long ago.

The audacity of those words is breathtaking. At the height of our people's suffering in exile many centuries ago, when we were being massacred, persecuted and hunted as no other nation before or since, how could anyone suggest that ever one of Jerusalem's many conquerors would leave the Wall standing? And yet, here it is, erect in all its grandeur, defying history, humiliation and the odds, a physical testament to the Divine promises made to our forefathers so very long ago.

But how often do we visit it? When was the last time you caressed its stones, or bent your head and leaned on it soundlessly seeking spiritual succor? Sure, there are those who regularly make a pilgrimage to the site, while others seek it out in times of need.

But there are too many of us – far, far too many – who have not set eyes on the Wall in all its glory in years or even decades.

This has got to change. Especially now, when pressure is sure to mount on the Jewish state to divide Jerusalem.

I think it is time for each and every Jew, all those of us who love Jerusalem and cherish its unity and wholeness, to make a simple yet significant pledge: to visit the Western Wall at least once a year. Don't let 12 months go by, don't allow the time to pass, without heading to the Old City of Jerusalem and standing at the Wall.

Just imagine what our ancestors down through the generations would have given to be able to glimpse it for even a few moments. How can we not seize the opportunity to go there, to be there, to show the Wall, and G-d, and all of mankind that this place is ours and we shall never give it away? A question: Have you ever wondered what holds the Wall together, what keeps those majestic stones united? There is no cement or adhesive, nothing that would appear to keep them in place. What is the secret of its accord? The late Rabbi Dov Perla, the rabbi of the Western Wall, pondered this question and once told a bystander visiting the site, "It is the pressure. The pressure of the heavy stones one on top of the other – that is the secret of its upright position, just like the Jewish people! "The more the nations pressured us," he continued, "the more external pressures we faced, that is what brought us together in unity of purpose. That is what has kept the Wall standing, and that is the secret of our people too."

On Jerusalem Day in 1967, Jerusalem itself was united, and we were reunited with it, the heart of our nation, the source of our collective soul.

Let us recommit ourselves today to that sense of unity by visiting the Wall at least once a year and never abandoning it again. Take the pledge, now, and keep your promise. The Wall, and especially He who watches over it, await.

Looking for God: A Lesson from a Survivor
Can You Show Me This "God?"
How to Become Immortal
Judaism and Mental Health
Comments
MOST POPULAR IN Israel
Our privacy policy
Aish.com Is Looking for Great Writers