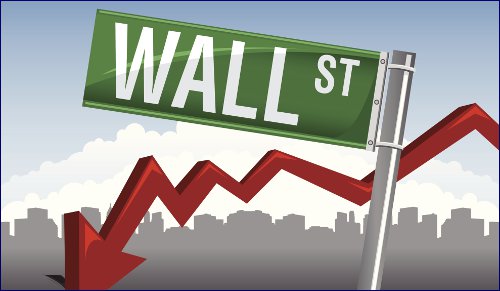 Another wake-up call just in time for Elul.

Wall Street is reeling. The Dow Jones industrial average fell 1089 points in just a few hours one morning this week, setting the worst intraday drop in its history. Concern is spreading across global markets and fear is the prevailing mood of investors. The bull market doesn’t seem to be in sight anymore and the gurus of Wall Street try to maintain their optimism even as they weep over their unexpected losses.

What happened? For those of us who take the lessons of the Torah seriously we recognize that God long ago warned us of precisely this kind of economic distress, offering wisdom especially relevant as we prepare for the forthcoming High Holy Days.

It was a story we surely all remember from the Bible:

Joseph taught Pharaoh a startling new idea that had previously never been recognized. There is an economic cycle that constantly repeats itself, taking us from prosperity to poverty, only to replicate the pattern over and over again. The gist of Joseph's advice, which saved Egypt's economy and allowed it to become a world power, was simple: Prepare in the good times for the bad times that will surely follow.

Fast forward to 1929. While the poor had sunk their savings into a market they were assured could only go up, American statistician, business forecaster, and author Roger Babson warned in September of that year: “Fair weather cannot always continue. The economic cycle is in progress today, as it was in the past. The Federal Reserve System has put the banks in a strong position, but it has not changed human nature. More people are borrowing and speculating today more than ever in our history. Sooner or later a crash is coming and it may be terrific.”

It isn't true that people had no advance warning for the Crash of '29. James Dale Davidson and Sir William Rees-Mogg, in their book about this crisis, Blood in the Streets, quote Paul Clay of Moody's Investor Service, who on December 28, 1928, spoke about that time's major “injurious financial fallacies.” Clay said, “First among these fallacies is the New Era delusion as typified by the famous dictum, `This is a new era. Statistics of the past don't count.' Every period of great prosperity is considered to be a new era and so much better fortified to give promise of permanence.”

Sound familiar? Before the crash of 2001 as well as that of 2008,(note: 7 years between them and seven years later brings us to the present, 2015) newspapers and magazines overflowed with stories about the “new paradigm”—the notion that thanks to increased global competition and technological advances, inflation and the business cycle are dead. The advanced economies, in other words, could look forward to uninterrupted years of strong growth and low inflation, and the exuberance of equity prices around the world was thereby justified.

In other words, forget the past and the theory of economic cycles. Joseph was wrong. The cows and the stalks of Pharaoh's dream had been replaced by bulls. As the Economist pointed out on July 18, 1998: “The key to Wall Street's continuing miracles, bulls have started arguing, is the new courage of small investors. The suggestion is the rules that they have followed in the past no longer apply. Having overcome a previously irrational fear of the risks of equities, they are pouring into them.”

Too bad everyone forgot yet another all-important piece of Biblical advice:

What is even more incredible, some economists pointed out, is that the duration of financial cycles also correlates to biblical laws:

At the end of every seven years, you shall grant a release of debts. And this is the form of the release: Every creditor who has lent anything to his neighbor shall release it (Deuteronomy 15:1-2).

And you shall count . . . seven times seven years . . . forty-nine years. Then you shall cause the trumpet of the Jubilee to sound on the tenth day of the seventh month; on the Day of Atonement (Yom Kippur), you shall make the trumpet to sound throughout all your land. For the fiftieth year shall be holy, a time to proclaim liberty throughout the land to all enslaved debtors and a time for canceling of all public and private debts. It shall be a year when all the family estates sold to others shall be returned to the original owners for their heirs (Leviticus 25:8-10).

Just as Joseph spoke of seven good years followed by seven lean years, economic history seems to indicate a general pattern of recessions every seven to eight years with a major depression approximately every fifty years. The cancellation of short-term debt after seven years and the return of land every fifty years may perhaps be the Bible's way of helping all those hurt by the consequences of inevitable economic cycles.

James Dale Davidson and Sir William Rees-Mogg, financial advisors and authors of Blood in the Streets, are intrigued by yet another aspect of timing apparent in economic cycles. They write:

Even more mysterious is the strange tendency for major crashes to occur in the autumn. For example, September 18, 1873; October 29, 1929; October 6, 1932; October 18, 1937; October 19, 1987; and October 13, 1989. Each of these dramatic results, among the largest drops ever recorded, occurred in the fall. The old view would be to argue that this is only coincidence, which of course is possible. Most likely some factor we do not now understand increases the vulnerability to sell-offs in the fall.

What could there possibly be in that time period which from a divine perspective makes it so susceptible to terrible downfalls? Allow me to suggest a possible answer: On the Jewish calendar, these dates always coincide with the period of the High Holy Days, biblically designated as the time of Heavenly Judgment.

It isn’t quite September yet. We’re still in August but on the Hebrew calendar we are already in Elul – the month designated for introspection, for soul-searching, and for repentance in every area of our lives. Money, too, requires our attention. How we spend it, how much we allow it to influence us, for good or for bad, how much we permit it to define our concerns and to affect our character. The message on our coins is “in God we trust,” but all too often the message of our lives is that it is wealth we worship.

I believe that it is precisely now, in these days with such special spiritual meaning, that Wall Street urges us to remember that our financial well-being is ultimately in the hands of God, and the best way to ensure blessings from above is to be guided by the wisdom of the Torah.