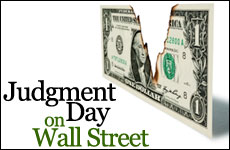 Is Wall Street sending us a Rosh Hashanah message?

Even as we face divine judgment on the high holy days, it's hard not to think about the worldwide monetary melt-down and the carnage of corporations that we thought were invincible. After all, it's not just our lives that stand in the balance when God makes his decisions about our future. As the deeply moving prayer of Rabbi Amnon, Unetane Tokef, puts it, these are the days when both our fate and our fortune for the coming year are sealed: "Who will live and who will die, who will become impoverished and who will become wealthy."

The Hebrew word "Damim," the rabbis tell us, means not only blood, but also money. A strange combination at first sight, but one filled with profound insight. Judaism does not denigrate the importance of money. It is not the root of all evil; it is morally neutral. Just as it can be misused for improper purposes it can also serve to ennoble our lives and the lives of others. We are permitted to pray for wealth, just as our forefathers did. The Kohanim, the priests who are commanded to bless the Jewish people, are told to keep financial security in mind as they lift their hands for their benediction. Money is the fruit of our efforts, earned with the aid of our blood and our toil. And it is as much the concern of divine Providence as our lifespan.

So if God is involved with our portfolio, we have to wonder why He has allowed us to suffer so much this past year?

Neither Barron's nor Fortune nor Forbes had any idea that these bastions of financial strength would soon collapse into bankruptcy or federal takeover.

If only we could have had a window into the future we would have been spared the incredible turnabouts of the stock market. Even the most wizened professionals say they have never seen anything like it. In January of this year Barron's magazine advised its readers to concentrate purchases from its list of most secure and risk-free companies. At the very top of their suggestions for best performers for the coming year were Lehman Brothers, Bear Stearns, Fannie Mae and AIG. But of course neither Barron's nor Fortune nor Forbes had any idea that these pillars of capitalism, these bastions of financial strength, would soon collapse into bankruptcy or federal takeover. So today many of last year's billionaires have to sadly confront the fact that they are now only millionaires -- and the rest of us have to deal with the reality of rapidly sinking retirement funds, plunging real estate values and panicking margin calls.

Strangely enough we have very conflicting views about God's role in all of this. The Austrian playwright Arthur Schnitzler pointedly observed, "We know of some very religious people who came to doubt God when a great misfortune befell them, even when they themselves were to blame for it; but we have never yet seen anyone who lost his faith because an undeserved fortune fell to his lot." We attribute success to our own efforts. We call catastrophes acts of God. When we "make it," we thank ourselves. When we lose it, we blame an unjust Heavenly Ruler.

People of faith, however, have to acknowledge that both good and bad fortune in the final analysis simply represent the will of God. Good times are blessings from a Higher Power. Tough times are divine decrees with a message and meaning all of their own. And that is what we should be thinking about as we contemplate our diminishing bank accounts.

Let's take a cue from a remarkable observation by James Dale Davidson and Sir William Rees-Mogg, financial advisers and authors of Blood in the Streets, who were intrigued by an aspect of timing apparent in economic cycles:

"Even more mysterious is the strange tendency for major crashes to occur in the autumn, especially in October. For example, September 18, 1873; October 29, 1929; October 6, 1932; October 18, 1937; October 19, 1987; and October 13, 1989. Each of these dramatic results, among the largest drops ever recorded, occurred in the fall. The old view would be to argue that this is only coincidence, which of course is possible. Most likely some factor we do not now understand increases the vulnerability to selloffs in the fall."

To which of course we might add the events of this September which are so reminiscent of another doomsday scenario.

Dare I perhaps suggest that this mysterious phenomenon is due in no small measure to the fact that this time period invariably coincides with the days when mankind is weighed on the scale of Heavenly Judgment? It is not coincidence that rules our fate but divine fiat, the result of a process finalized not "in the fall" but more accurately in the awesome days leading up to Rosh Hashana and the Day of Atonement.

It is during this time that God has to impress upon us the need to clearly define our values.

It is during this time that God has to impress upon us the need to clearly define our values. In Jewish tradition there is a saying that during our lifetimes we have three main friends -- and when we die they leave us in exactly the reverse order in which we treated them. No sooner does our soul leave our body than all of our wealth flees with it as well. Families are more faithful. They walk with us after our passing to the cemetery, our final resting place. Then, they too leave us to go on with their lives. It is only our name, the good deeds we performed for others, and the influence we may have had upon them, that outlive us and offer us a share of immortality.

Strange then, isn't it, that we spend most of our lives chasing after money, spending far less of our time than we should with our families, and spending so little of our efforts to accomplish those things by which will be remembered.

Maybe, after all, making a fortune isn't all that it's cracked up to be. Maybe we can even identify with the profound words of Emile Gauvreay: "I was part of that strange race of people aptly described as spending their lives doing things they detest to make money they don't want to buy things they don't need to impress people they dislike."

It is an insight that needs to be constantly repeated. No wonder then that God incorporated it into the Bible by way of a fascinating law regulating the ancient agrarian economy. Six years farmers were permitted to work their fields, to gather in their crops, and to add to their wealth. Every seventh year however was known as the year of Shmittah. Land could not be tilled. Everyone could equally and freely share in its produce. The economic rat race was suspended and all people were urged to spend a year as a sabbatical -- studying and pursuing their spiritual growth even as for six years they emphasized the material. And most important of all they were to acknowledge that no man could really own the land. As mortal residents on earth we are all only temporary managers of God's gifts, recipients of His financial blessings and always aware of the true source of everything that we have been privileged to accumulate.

What a powerful and needed lesson the Torah meant every seventh year to be! Would it surprise you to learn that economists have noticed a symmetry between this biblical seven-year lesson and the almost perfect seven-year boom to bust cycles? In 1999, Warren Buffett, a financial genius widely considered to be America's greatest investor, took the liberty of linking Joseph's interpretation of Pharaoh's dreams with the movements of the Dow Jones at the close of the 20th century. Fat cow are swallowed up by lean cows, years of plenty invariably have famine follow in their wake. Bubbles of any kind are unsustainable and burst -- be they prime rate mortgages, million-dollar condos or "risk free" investment house stocks.

Without these corrections we would never be forced to recognize the realities of our lives. Greed would transform us from servants of God to slaves of our possessions. We would perhaps never re-orient ourselves to the proper balance between the spiritual and the material in the conduct of our lives.

It shouldn't surprise you then that the technology and Internet bubble burst in 2001 just happened to be a Shmittah year. And as we bid farewell to yet another tumultuous financial year, it's important to remember that 5768-2007/8 was yet again a Shmittah year. That's why we almost assuredly have to understand these trying times as God's voice attempting to again teach us the lessons of the biblical sabbatical in contemporary terms.

And finally let us find comfort in knowing that God will surely heap His abundant blessings upon us if we only learn to use them with dignity, with morality and with spiritual sensitivity.

A Father’s Love and Rosh Hashanah

Nine Plus One
For Every Individual, A Torah Scroll
Allegiance To The Monarch
Meet the Real You: Yom Kippur
Comments
MOST POPULAR IN Current Issues
Our privacy policy
Aish.com Is Looking for Great Writers