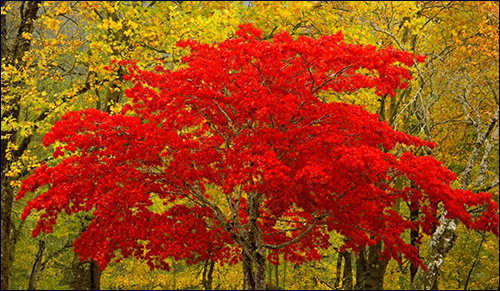 Sometimes the most beautiful things are hiding in plain sight.

"Not again," I groaned through clenched teeth, struggling with the lawn mower. My tree was shedding for the umpteenth time this fall. Twigs, branches and leaves surrounded the tree like a moat, impeding my access with the mower.

Never a fan of yard work, I resigned myself with a sigh to the thankless task of cleaning up after my tree, which had made its mark on the walkway and on down to the street. I raked the leaves into piles, gathered the twigs and branches and cut them into smaller pieces so the trash man wouldn't complain.

Don’t think I hate all trees. I love trees, like the way grandparents love grandchildren. They're fun to visit from time to time, just don't ask me to clean them up when they get dirty. In fact, our family loves hiking on forest trails, soaking in the lush greenery and shade of massive trees under a brilliant blue sky.

Shortly after this miserable clean-up, a person I knew from shul who shared our family's love of nature and hiking came to me excitedly with an important bit of tree news. "Shlomo, have you been to Oregon Ridge Park in the last couple of weeks?"

"No. What's happening there?"

"The trees are a gorgeous color right now! I just took the kids!"

"I'll try to get over there. Thanks for the tip." I didn’t end up going. Frankly, I forgot all about it. Until I saw him two weeks later.

"Did you go to Oregon Ridge yet?"

"Too bad. The leaves there are already falling off. But don't worry. I discovered a beautiful tree in our neighborhood, on Hal Circle, whose leaves are intact. It's an incredible tree."

Alas, something came up and I didn't make it to Hal Circle. The next Shabbos I saw him, he was nearly hyperventilating from excitement.

"This is it, Shlomo! I found another tree in this area that kills even the one on Hal Circle! This tree is bright orange and red! It's on fire! You'll regret it if you don't go see it, and the season's almost over!"

He was probably right; I would regret not seeing such an amazing tree so close to the end of autumn. Plus, it was a beautiful Shabbos day, and I could make a nice walk out of it with my family.

"Okay. I really will go see this one. Where exactly is it?"

"It's on Berkeley Avenue."

Hmm. I live on Berkeley Avenue. No one ever told me of a knockout tree. Then again, Berkeley's divided into three parts, with the furthest sections being a mile apart.

"Which part of Berkeley is this tree on?"

"Two blocks from the shul."

Impossible. That's the part of Berkeley I live on.

"I think it's between Hanson and.....hmm.......Bartol is it? Yes! Bartol!," said the tree aficionado, who didn't really know where I lived anyway.

"That's my block!" I shouted, almost furious that a dazzling tree somewhere on my street had eluded me for so long. "Where on the block is it?"

"It's on the front lawn of the house right across from Stuie!"

I was thunderstruck. "I live across the street from Stuie," I said almost inaudibly.

"What? That's your house? Your tree?!" he said, astonished.

I wanted desperately to be someplace else at that moment. How could I admit to him that I'd been so busy complaining about the tree that I never once really looked at it in the three years I had lived in the house? I took a deep breath and told him the truth.

"I, uh, never really paid much attention to it."

"I can't believe you!" he said, incredulous.

Embarrassment aside, I rushed home to see the tree – my tree! I got my first look at it from down the block, a lump forming in my throat.

It was absolutely magnificent. With stunning hues of red and orange, the tree seemed to hold out its arms to me in a breathtaking symphony of color. It possessed a natural symmetry and had stately elegance.

My tree. How silly I'd been never to notice it before. I passed under its branches every time I walked out of the house. I walked around it thousands of times as I mowed the lawn. I cleaned it. I picked up after it. I even sat under it and enjoyed its shade. But I never saw it!

PODCAST: Well, If You Asked Me…

6 Jewish Ways to Respond to Anger

The First Fire: The Power of Havdalah

Face Your Fear and Live
Why My Iranian Mother Didn’t Want Me to Become a Religious Fanatic
The Jewish History of Prague
Why the Sexual Revolution was Bad for Women
Comments
MOST POPULAR IN Spirituality
Our privacy policy
Aish.com Is Looking for Great Writers