The Shrine of Mordechai and Esther 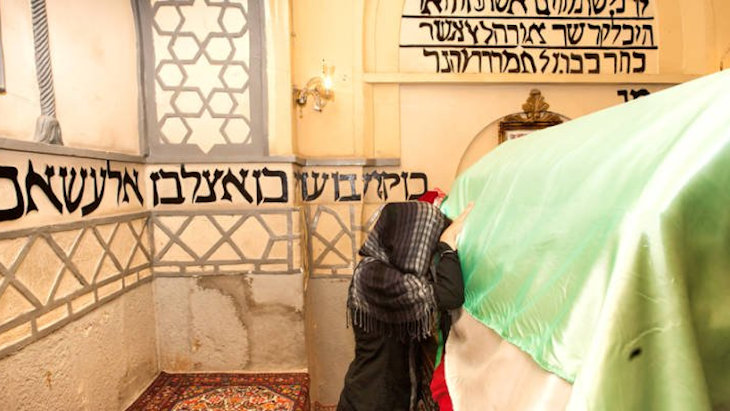 The Iranian government is threatening to demolish the tomb of Mordechai and Esther and turn it into a Palestinian consular complex.

The original Purim story took place more than 2000 years ago, but Mordechai and Esther are back in the news – and the place where it is happening is none other than ancient Persia, today known as Iran.

For centuries Iran had a thriving Jewish community. A shrine in the city of Hamadan where, according to tradition, Mordechai and Esther are buried, is a popular place to visit throughout the year, especially on Purim day. Although there is some disagreement as to whether the tomb is in fact the gravesite of these biblical heroes, Hamadan, known in antiquity as Ecbatana, is in the Kurdish region of Iran and Mount Alvand, which overlooks the city proper, hosted the summer residence of Persian royalty of the Achaemenid Empire (the period when the Purim story is believed to have happened).

Tradition has it that Esther and Mordecai – after spending their final years at the royal resort – were buried in the city, next to one another, with a shrine constructed over their graves.

For hundreds of years Jews, Muslims and Christians visited what was commonly regarded as a holy site. Visitors in the 19th century described a prayer area designed to enable worshipers to face both the tombs as well as Jerusalem at the same time. Near the tombs was a wall with space for prayers to be inserted just as is done to this day in the Western Wall. 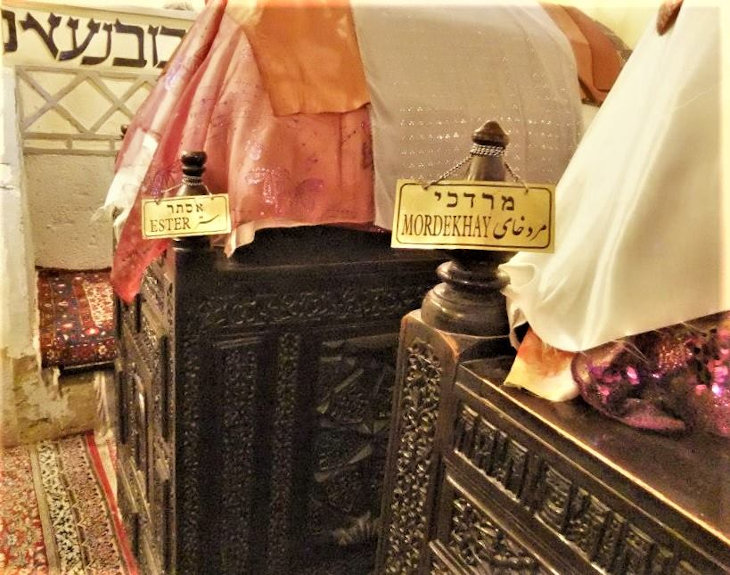 In all that time the shrine and its tombs were hidden away in a crowded part of Hamadan. It was only accessible through a narrow dirt alley surrounded by houses. But in 1971, as Iran observed a national celebration of 2500 years of Iranian monarchy, the government permitted the Iranian Jewish Society to commission an architect to undertake a renovation of the site in recognition of its historic importance.

Yassi Gabbay was hired, a number of houses around the tomb were purchased in order to be demolished, and the shrine was made accessible from the main street by way of a bridge Gabbay had constructed. A partially underground synagogue chapel was built with a remarkable feature that has special symbolic significance by way of the connection with the Purim story.

Esther’s name was linked with the Hebrew word for hidden. Rabbinic commentators on the biblical book which bears her name as title, Megillat Esther, point out that this emphasis on concealment is in fact key to what may well be the major message of the story as well as the holiday that commemorates it.

The Jews of the exile who lived in a foreign land thought it best to hide their religious identity. On the advice of Mordechai, “Esther did not make known her people or her birth origin.” The king did not know he had married a Jewess. When Haman convinced the king to issue an edict which would ensure the genocide of her people, Esther had to mightily struggle with the quandary of self-revelation. It was then that Mordechai changed his mind. It was essential that Esther tell the truth. “Who knows,” Mordechai in desperation told her, “if it was not for a time such as this that you were elevated to become the Queen?”

Esther fearfully told Achashverosh who she really was. And that's when everything turned around. Taking pride in her true identity, metaphorically “taking off her mask” – is what saved the Jewish people from annihilation.

That is probably why the architect of the renovated tomb added something very unique to the synagogue chapel. Although partially subterranean – just like Esther herself “hidden” – it not only becomes open, “revealed”, but also has a skylight in the shape of a Star of David. That Magen David is so striking that it can be seen in Google Earth which, as many people have pointed out, quite possibly makes the Islamic Republic in Iran home to the only Jewish star visible from space! 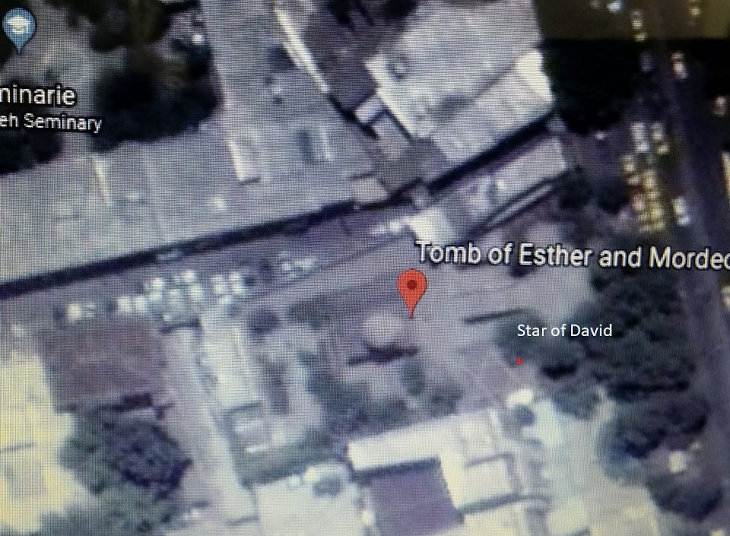 Quite a journey from the Persian diaspora where Mordechai first thought it was wise to advise Esther that exile is best served by hiding one’s Jewish identity.

But the modern story did not end there.

For reasons that are not quite clear, on December 9, 2008 Iranian news outlets reported that the tomb of Mordechai and Esther would now be under official government protection and responsibility. In all probability Iran decided that this demonstration of tolerance was a sound move at a time of international criticism. And so, until last week, ancient Persia – today Iran – protected the graves of Mordechai and Esther.

Remarkably, just before this Purim, the Iranian branch of the Alliance for Rights of All Minorities (ARAM) reported that the Iranian government is threatening to demolish the tomb of Mordechai and Esther and turn it into a Palestinian consular complex. The reason given is “revenge for American President Trump’s Deal of the Century”.

Jews around the world will be celebrating Purim with the knowledge that Haman still lives, that Mordechai and Esther are still threatened even so many centuries after their deaths. But Jews will also remember very clearly the other message of Purim – the message that no matter how many times our enemies try to destroy us we not only miraculously survive but we are also blessed to see the destruction of our enemies.

Take a tour of the shrine in the video below:

Are Labels Just for Clothing?

Bombs Over Germany: A Passover Video

The Significance of the Spanish Elections
Deep Breaths
What Happened to the Truth?
The Japanese Everything Bagel Spice Recipe
Comments
MOST POPULAR IN Current Issues
Our privacy policy