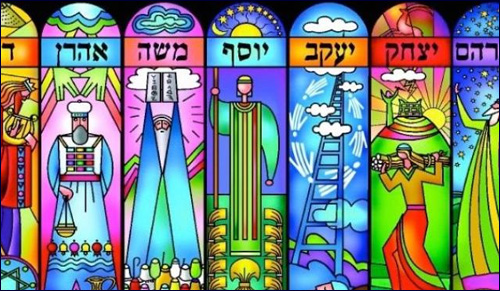 Why Jews invite these biblical heroes to the sukkah each night.

Oprah Winfrey always seems to know just what to ask in order to really get to know her subjects. She said one of her favorite questions was this:

“If you could invite anyone from all of history for a dinner party you’re giving, who would you choose?”

Jews long ago had the same idea – and offered a collective answer during the joyful holiday of Sukkot. Sukkot is a time when we leave the walls of our homes in order to sit in booths of beauty open to friends, guests and strangers. In the season of the harvest we are anxious to share with others. And to express the mitzvah of hachnasat orchim – welcoming guests – we have a ritual known as ushpizzin. For seven days we invite another biblical hero by name to join us as “guest of honor” in the sukkah.

So how do Jews answer Oprah’s question?

I hope you take the opportunity to invite these guests recommended by Jewish tradition: Abraham, Isaac, Jacob, Joseph, Moses, Aaron and David. For some, the invitation is a way of reflecting on their role in the history of our people and the meaning of their lives as keys to our spiritual identity. For those more mystically attuned, the Kabbalists teach that the souls of these invitees literally come and make contact with their descendants, reaffirming the link between past and future.

Jews do not lack for heroes. Why were these seven chosen for this unique Sukkot distinction?

Permit me to offer my personal suggestions as I address each figure. These biblical heroes speak to us in the language of the needs of 21st century Jews, showing us how to make life more meaningful and spiritual.

Abraham, Isaac and Jacob – please take a day each and share with us the joy you discovered when you pioneered the concept of prayer.

It was you, Abraham, who the Talmud tells us was the first to speak to God with the prayer of shacharit – the time of morning when we first open our eyes to the glories of the universe and feel the need to respond with overflowing gratitude. It is you, Abraham, who made us realize that if we don’t daily take the time to count our blessings we will turn into ungrateful recipients of God’s goodness keeping track only of our misfortunes. We will concentrate on what we don’t have and will only be saddened because we never have enough.

It was you, Isaac, who first prayed when the sun began to set the afternoon prayer of minchah. We need to learn from you, Isaac, how to deal with the moments when life seems to turn from brightness to darkness, from success to seeming failure, from good fortune smiling on my every decision to difficult days of challenge which threaten my accomplishments and my well-being. Isaac, the man who felt so close to God that he was willing to give up his life on the altar if the Almighty so willed it, is the guest we want to inspire us when our faith begins to falter and to reassure us that a darkening day is always followed by the brightness of another.

And it was you, Jacob, who established ma’ariv – the prayer to God in the night, the moment of fear, of terror, of dread and anxiety. The nighttime prayer requires the greatest faith of all. Ma’ariv was the prayer of all those in these past few months who faced hurricanes and floods, tremors and earthquakes, as well as unimaginable losses. We need Jacob to share the secret of his personal strength which sustained him from the attacks of Esau in his youth to the tribulations of the Joseph story and the first Jewish exile to Egypt in his old age.

The first three days of Sukkot, days in which we renew contact with our patriarchs, make our holiday prayers all the more meaningful. Their lives serve as best answer to the question a man once asked: "What di you gain by regularly praying to God?"

The man replied, "Well let me tell you what I lost: Anger, ego, greed, depression, insecurity and fear of death." Sometimes the answer to our prayers is not what we gain, but what we lose -- which is ultimately the gain.

Let’s not forget to invite Joseph, the only one commonly referred to in Jewish tradition as Hatzaddik – the righteous one. Teach us, Joseph, how you were able to withstand the seductive advances of the wife of your employer? How were you able to maintain faith not only in God but in the goodness of man after what your own brothers did to you when they sold you into slavery? Perhaps even more relevant to us in the contemporary world, how did you prevent unimaginable success to destroy your ethical character? Most amazing of all, how were you able to forgive your brothers for their horrible crime and find it in your heart to absolve them of their sin? Love your neighbor as yourself – even after they’ve treated you so harshly? Join us for dinner, Joseph, and let us know how you did it.

Moses and Aaron – at a time when we so desperately need leaders worthy of their position we can’t wait to have you at our table. Moses, you’re the only one to have spoken to God “face to face.” What was it like? Can you reveal any more to us than what God taught you as his thirteen attributes of mercy? And how did you deal with a rebellious people who never appreciated you as much as you deserved? Moses, we don’t even know where you are buried because God didn’t want us to worship your tomb instead of your Torah. Help us now to become better Jews by getting to know you better.

And Aaron, remind us of how you gained the love of a people as the high priest who cared for everyone – sinners included – and who, as the Talmud tells us, was even willing to lie in order to restore friendship between fellow Jews. “I’ve heard the man you consider your enemy telling me how aggrieved he is and how sorry for the misunderstanding between you. He so desperately wants to apologize but is only held back because he is embarrassed.” That is what Aaron would tell each one of two disputants – even though it was not true. Aaron believed that there were times when truth could be compromised in the interest of love, when a lie could even become a mitzvah if it could turn adversaries into friends.

Sukkot brings together the seven giants of Jewish history whose values and life stories made us who we are and represent the key to our survival.

The holiday would not be complete if we didn’t reserve a day for King David. David is destined to be the ancestor of the Messiah. He assuredly earned that distinction by his countless contributions to Jewish history. His royal rule was in the main exemplary. His Book of Psalms is a masterpiece of prayer and of poetry. But to my mind there is one thing that stands out above all. Confronted by the prophet Nathan for his sin with Bathsheba, David broke down and unabashedly responded with one word: Chatati - I have sinned. No explanations, no excuses, no assertion of power. No pitting of King versus prophet. David publicly acknowledged that God is greater than any King and that divine law supersedes any human failings.

In a time of the glorification of power, of personality cults and of celebrity worship, of self-aggrandizement and “selfies”, King David’s confession is perhaps the best way to bring to a close the holiday period which asks us to come closer to God for the coming year.

The number seven in Judaism stands for completion. It represents the sanctity of Shabbat. On Sukkot it brings together the seven giants of Jewish history whose values and life stories made us who we are and represent the key to our survival.

A Shelter of Belonging: How the Sukkah Can Connect Us to Each Other

How to Tap into The Meaning of Sukkot: 5 Inspiring Life Lessons
The Wholeness of Being Broken
The Strange Face of Change
The Grand Mufti of Jerusalem and the Holocaust
Comments
MOST POPULAR IN Themes & Insights
Our privacy policy