The New Pew Report and the Ten Commandments 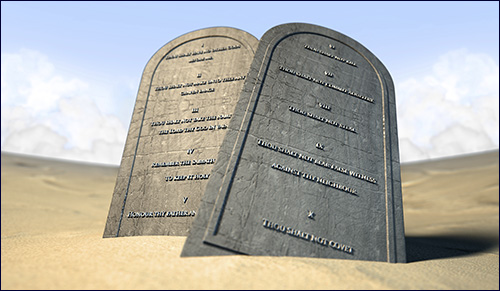 Are the Ten Commandments in trouble?

As Jews prepare to celebrate the holiday of Shavuot commemorating the giving of the Torah at Sinai, a new report by the Pew Institute makes clear that the millennium old divine code for ethical behavior is today being seriously challenged. At least one of the commandments, the first to be exact, has significantly lost its claim on contemporary acceptance with the incredible growth of a movement that now has its own name.

The “nones” are Americans who choose “none” as response to their affiliation with brand-name religion – and in the words of John Green, director of the Bliss Institute of Applied Politics at the University of Akron, they are the new major force in American faith. They are, Green said, “more secular in outlook and more comfortable admitting it" than any previous generation.

Earlier this month, the 2014 General Social Survey was released. It shows in stark relief that what some are calling the Great Decline of religion in America continues: Since 2012, the U.S. has about 7.5 million more Americans who are no longer active in religion.

The GSS is the gold standard for sociological surveys. Funded by the National Science Foundation, this multimillion-dollar study gives us the most accurate data on American society – including religion.

If this growth continues, in a few years the largest “religion” in the U.S. may be no religion at all.

When asked their religious preference, nearly 1 in 4 Americans now says “none.” Up until the 1990s, the percentage that was in this group known as “nones” hovered in the single digits. The 2014 GSS showed that nones are now 21 percent of the population.

How large does that make this group? According to the GSS, there are nearly as many Americans who claim no religion as there are Catholics. If this growth continues, in a few years the largest “religion” in the U.S. may be no religion at all.

The Pew Report, released just last week, shows "Nones," at 22.8% of the U.S., second only to evangelicals and ahead of Catholics in religious market share. Far more disconcerting are the numbers that point to the direction of the future. A high percentage of younger members of the Millennial generation – those who have entered adulthood in just the last several years – are religious “nones” (saying they are atheists or agnostics, or that their religion is “nothing in particular”). At the same time, an increasing share of older Millennials also identify as “nones,” with more members of that group rejecting religious labels in recent years. Overall, 35% of adult Millennials (Americans born between 1981 and 1996) are religiously unaffiliated.

America has long been a uniquely blessed country. Our Pledge of Allegiance identifies our claim to special divine providence. Based on the vision of our founding fathers, we have been “one nation, under God.” The founding fathers never failed to emphasize this unique relationship between our country and our creator.

Benjamin Franklin, speaking for almost all of the signers of the Declaration of Independence, expressed it well: "Here is my Creed. I believe in one God, the Creator of the Universe. That He governs it by His Providence. That He ought to be worshipped. That the most acceptable service we render to him is in doing good to his other children. That the soul of man is immortal, and will be treated with justice in another life respecting its conduct in this. These I take to be the fundamental points in all sound religion, and I regard them as you do in whatever sect I meet with them.”

What shall we then say about our present generation? As a contemporary sociologist put it, Americans today will soon need to change “one nation” to “none nation” – and eliminate any mention of the one who introduced himself at Mt. Sinai as “I am the Lord your God who took out of the land of Egypt the house of bondage.”

Rabbinic commentators made a profound observation about the number ten as key to the commandments. Ten as a number is written with a one followed by a zero. Together they make “10”. Remove the number one however and you are left simply with a zero, with nothing. Similarly, remove the first commandment, belief in a God of history with whom we have a personal relationship, and all the other commandments fall by the wayside.

Dostoyevsky was right in his famous words in The Brothers Karamazov: “Without God, all is permissible.” The noble ideals of the Decalogue secure their power from firm belief in an all seeing God to whom we owe unqualified obedience. Without God, greed permits theft, human passions justify adultery, ingenious rationalizations vindicate even the most obscene violence and murder.

A secular society identifying itself as “none” needs to fear far more than the absence of God in its midst. The most profound message of the Ten Commandments is that belief is the necessary prelude to civilized behavior.

The Midrash makes a striking observation about the two times the number ten makes a significant appearance in the book of Exodus. Before the Ten Commandments, ten was the number of the plagues God sent against the Egyptians as punishment for their crimes. Sinai however offered an alternative to the ten of retribution. Ten are also the heavenly prescription for the conduct of a moral and ethical life.

The Ten Commandments speak to us with the same message today as they did to our biblical ancestors. They remind us to choose One instead of None, the sacred over the secular, in order to find divine favor and blessing. And as Jews, entrusted with the mission to be “a kingdom of priests and a holy nation,” we must be in the forefront of returning God to his proper throne of ruler over all mankind.

Will Smith’s Smack Heard Around the World
In the Shadow of David and Goliath
Where Do the Laws of Nature Come From?
Saadiah Gaon, Rashi and Maimonides: How Three Rabbis Revolutionized Judaism
Comments