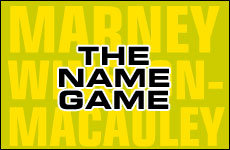 While some Jews are naming their kids things like “Jazz” and “Thorne,” others are kicking it old school and getting biblical.

So many of you good people have asked me the same question: “How did a nice Yiddishe maidel like you get a name like that?!”

Here’s the short of it. I was to be named in honor of my deceased bubbe, Manya. But when September 1 brought me forth ... my parents didn’t have an “M” moniker that sent them swooning. Until my aunt heard “Marnie” on the street and so I was Jewishly dubbed.

Winston was my surname, changed from Weinstein in Canada, changed from Malamud in Russia. I married into “Macauley” – an English Jewish convert, which is how I became Marnie Macauley – a great name for a peppy Irish folk song.

I married a Jewish convert, which is how I became Marnie Macauley – a great name for a peppy Irish folk song.

I loved the unusual. (Did I have a choice?) Sure, I had to endure being called, “Mimi,” “Moony,” “Mamie,” “Martin” – in my draft notice – and my elevation to “Marine. But there was compensation. I knew whenever “Marnie” was called, it was meant for me, and turned around. I couldn’t understand how the Bobbys and Lindas lived with “regular” names. I couldn’t fathom turning around that much.

Except for that one time. A first cousin once removed named her daughter “Marnie.” At a family Bar Mitzvah, when “Marnie” was called to light a candle ... let’s say I still want to scratch my eyes out in embarrassment. The getting up ... the being told, “Not you” ... the titters during that long walk back to my “fringe-relative” seat which should’ve been my tip-off – IF – I’d ever been in a room with more than one “Marnie.”

Which I hadn’t. In the 1950s, I stood out in a sea of Jewish “Debbies,” “Lindas,” “Davids,” and “Lisas.” Ashkenazic traditional? No way. “Max,” “Sam,” “Sophie” were “glass tea” names for bubbes and zaydes whose greenhorn roots clashed with red, white, and blue.

Max, Sam, you vant a glass tea? “ Mit a sugar cube, Sophie! In the new false teeth, a sugar cube you need like a loch in kop!

Did we Boomers do better by our own broods? By the late 1970s and eighties of boom and crash economics, our little Gen-Xers’ given names were gelt-driven. Seven pound bundles of all stripes were saddled with “Power” monikers, some unisex, that were perfect for a future debutante, doctor, or dictator. Many were conjured by writers, well, like me, for soaps like As the world Turns. The trend hit Jews the hardest. Krystal Cohen? Thorne Twersky? Face it. Pretension doesn’t “work and play well” with Yiddishe surnames. Or in elder hostels and retirement “villas.” Fast forward 50 years ...

“Krystal... get me a Ginki tea?” “Thorne Twersky! Double the Mega-Memory Smoothie! Your Ginki’s on your Hoveround MPV 30!” Not attractive.

Yet, we persevered. Suddenly, places like Brooklyn and the Bronx saw an explosion of little “Ashleys,” “Lindsays,” “Jamies,” “Tiffanys,” “Justins,” “Logans,” “Heathers,” “Blakes,” “Courtneys,” “Addisons,” “Lances,” “Whitneys,” “Sydneys, “Drakes,” and “Yales.” But my out-of-the-park faves were the “Bretts” and “Brents.” When I handed out birthday card invites? I yelled, “Brett!” in my son’s “Boomer-kinder-Jewishy” school and Boom! No less than 50 kids appeared. All genders. My sympathy was boundless for the little Lipschitz twins, Brent and Brett.

My sympathy was boundless for the little Lipschitz twins, Brent and Brett.

So, what are the Brents, Tiffanys, and Krystals doing to their offspring? Some are getting even. Some are “out-trending” with place names – “Montanas,” “Madisons,” and “Brooklyns.” Some have gone even further – into outer space.

Last year, when my cousin Judi (with an “I”) told me the stick turned blue, we rejoiced! A new little life –despite the bloated ankles, stretch marks that resemble crop circles, and a desire to wolf down a steer – whole.

“And you want to hear the names we picked out?”

Long ago, I learned never to play “The Name Game” with an expectant mother. Like “Do I look fatter?” there’s no good answer.

And so we had ... a moment of silence. Knowing that I’m “rendered speechless” less often than I hit a treadmill, Judi said, “I ... guess you’re not too crazy about it – either.“ Apparently she’d already “spewed” upon half of Long Island. Her bubblies, now de-fizzled, threw her into defensive mode: “Well, we wanted something different.”

Jazz ... Finkelman?! “Well, you got it.” I said, wondering where I could buy baby bling and stiletto booties for the naming ceremony.

They had a boy. Ninety family members thanked Hashem for sparing a newborn daughter of Rachel from spending her life with the “blues.” Judi named him “Judge” for her husband, a District Attorney. At least he wasn’t a proctologist.

Or a celebrity. Money and fame they have. So, I suppose they want to gift their bundle with something they don’t have. A “Kick Me” sign on their Burberry rompers. All it takes today is a little creative naming. Check these: Rachel Griffiths’ son? Banjo Patrick; Jason Lee’s? Pilot Inspektor; Shannyn Sossamon’s? Audio Science; Nick Cage’s? Kal-el ( Superman's birth name. Luckily his hero wasn’t Jughead.); Penn Jillette’s daughter? Moxie CrimeFighter; Lance Henriksen’s? Alcamy; Rob Morrow’s, an MOT’s little girl? Tu -- as in, Tu Morrow. Quick! Will these little “Bozos,” named for a dance craze, character flaw, machinery, quality of mercy, or a diagnosis, become:

a) an astronaut; b) a successful politician (on second thought ...); c) a Looney Tune impersonator

Ah ... but there are parents on our home planet, who’ve taken the most daring, most exotic, most unexpected route ever. A route that no one could have imagined only two generations ago.

The Coolest-Jew-Hot names today? “ Sam!” “Max!” “Rose!” “Sophie!” “Jacob!” “Lily!” They’re back, and they’re not only Cool Jew-Hot. Little Maxes and Sams are flying out of Cool Gentile celeb bellies faster than they can say “tummy tuck!” It took two generations of assimilation, but “glass tea” images of great-bubbe and zayde have turned from shtetl-shandas to ethnic chic. Finally. Proving, of course, that “everything old is new again.

But more, instead of shortening, lopping, and “mayonnaising,” many Jews, even young celebs -- from Mayim Bialik to Ethan Zohn -- are now wearing them with “kishka “ pride ! While the little “Sams” and “Sophies” have started this exodus back to our roots, we’ve still got a way to boldly go where we Jews have bravely gone before. Biblical!

I can’t wait to coo upon my little grandchildren: Chizqiyahu, Shulammite, Yechezkel, Shlomo, and Mattithyahu. Different? Without question. Timeless? Of course. And do they go with “Cohen,” “Levy” or even Matuschanskayasky!* You bet!

*Irony in reverse. This is the false name Walter Matthau (born Matthow) claimed in order to be more “exotic.”

Mid-Term Synagogue Elections Turn Ugly
The Blue Beyond
Great Place to Live
Is Eating Supposed To Be Spiritual?
Comments
MOST POPULAR IN Jewlarious
Our privacy policy