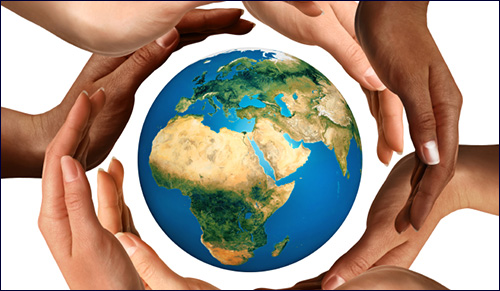 We've all seen the headlines about global warming, pollution and other pressing environmental issues. We've heard top scientists report on the damage we're doing to our planet as a species.

But while the physical effects of our actions are all too apparent, their spiritual implications are too often left out of the discussion. Solving this environmental crisis is not only a matter of saving energy, recycling, etc. – the solution begins with understanding our relationship with our planet and where we fit into the grand scheme of things.

While humanity has made great technological progress in the industrial and digital revolutions, we have simultaneously stepped backwards and forgotten our proper place in the universe.

The Jewish approach says we must see ourselves in relation to God's creation and build ourselves up morally and spiritually before we are able to seriously address the problems we face.

Judaism calls for respecting all of Creation and avoiding senseless destruction.

The primary question is how to balance our needs in a modern society with the dictates of Judaism which call for respecting all of Creation and avoiding senseless destruction. You may be surprised to know that the 3,300-year-old Torah, as well as Jewish thinkers throughout the ages, provides major clues for achieving this.

One of Judaism's most notable environmental ethics is the imperative to avoid senseless destruction. Deuteronomy 20:19-20 states:

When you besiege a city for many days to wage war against it to seize it, do not destroy its trees by swinging an axe against them, for from it you will eat, and you shall not cut it down...

This statement has profound implications. The great medieval sage Maimonides derives from this passage the prohibitions to not "smash household goods, tear clothes, demolish a building, stop up a water source, or destroy food."

Sefer Hachinuch, the 14th century rabbinic treatise, elaborates on the prohibition of chopping down fruit trees:

All destruction is included in this prohibition. The root of the [commandment] teaches our souls to love what is good... This is the way of people of good deeds who love peace, rejoice in the good of creation, and bring everyone close to the Torah. They do not destroy anything – even a mustard seed – and it troubles them to encounter any destruction or harm. If they can act to save anything from destruction, they use their entire strength to do so.

As this passage points out, there is a clear connection between wastefulness and spiritual decline, as well as between mindfulness of our surroundings and spiritual growth. Consider one example of waste in the modern Western world:

According to the EPA, in 2012 alone, more than 36 million tons of food waste was generated, with only 5% diverted from landfills and incinerators for composting. That figure represents almost half of the U.S. food supply for 2012, or $165 billion worth of food. Wastefulness also hurts the poor as food that could go to charity instead gets thrown out.

Another report says that Americans waste 7 billion gallons of water every day. And according to Washington State University, Americans represent 5% of the world's population – but consume 24% of the world's energy.

Besides consumer wastefulness we also have industrial destruction of the environment in the forms of deforestation, carbon emissions, plastic pollution, overfishing, and nuclear waste (to name a few of our most pressing environmental concerns). Now is an important time to heed the Torah's message and adapt ourselves both technologically and spiritually to meet these challenges. As Rabbi Samson Hirsch argues: The prohibition against senseless destruction is "the most comprehensive warning to human beings not to misuse the position which God has given them as masters of the world and its matter through capricious, passionate, or merely thoughtless wasteful destruction of anything on earth."

The Torah's commandments regarding the environment don't stop there. Leviticus 35:1-5 ordains that the Levitical cities should be surrounded by a wide strip of open land. Maimonides extends this to all cities in Israel. Rashi comments that the enclosure is meant for the "aesthetic enhancement of the city" (Arachin 33b). This has been carried over to modern times, where many cities have such a green belt.

Injurious industrial operations must be distanced from the city limits.

Regarding air pollution, the Talmud tells us: "A permanent threshing floor must be kept at a distance of 50 cubits from a town. One should not set up a permanent threshing floor on his own property unless there is a space of 50 cubits in every direction" (Baba Batra 2:8). Maimonides interprets this to limit air pollution and thus any industrial operations which cause dust injurious to humans and animals (Sh'chainim 11:1). [On a side note, Maimonides – also an acclaimed physician – wrote a treatise on asthma; he understood air pollution not just a spiritual issue, but also a medical one.]

Water pollution is also of great concern. The Talmud writes that "flax water must be kept away from vegetables" (Baba Batra 11:10) and that it is forbidden to dig a cesspit near a neighbor's well for fear that the well could become contaminated. The Torah is instructing us in a duty to avoid causing harm to others, even in a way that be essentially indiscernible.

From these teachings and others, we learn that protecting the environment is a Torah obligation that not only protects God's creation (including us), but also teaches us the principles of self-restraint, compassion and empathy. While the environmental values taught in the Torah don't completely map onto the modern liberal movement of "environmentalism," it is likely that the environmentalist movement derived inspiration from these values.

Even for those who don't consider themselves "environmentalists," we should still do everything within our means to ensure a bright future for future generations, whether it be recycling or buying an energy-efficient car.

Recognizing how fragile our planet is reminds us of the great responsibilities entrusted to us, not just for our own physical survival, but also for the fulfillment of our Divine mission. However, individual action fulfills only part of this mission. We should engage in social action, help educate others, and stand up for legislation that makes reckless destruction of our environment illegal, and sends a clear message that Creation is not something that can be needlessly tampered with and exploited.

The result will surely be a cleaner, more peaceful, and more spiritually aware world for tomorrow.

A version of this article was previously published in The Jewish Home LA.

Will Smith’s Smack Heard Around the World
Evolution 2.0: The Coming Darwinian Revolution
Chukat 5782: Let’s Play the Blame Game!
The Sin of Moses: The Two Ways to Communicate
Comments
MOST POPULAR IN Current Issues
Our privacy policy