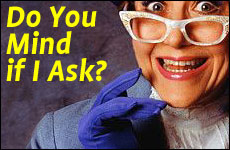 Through the years of coping with my son's illness, I've encountered the best in people, and the worst.

I was at a friend's bris, luxuriating on a fresh bagel with tuna, when I felt a slight draft behind me as someone whizzed by. "Don't I know you?" she said as she sat herself down. Lowering her voice to conspiratorial levels, she leaned toward me: "Tell me, how is your son?"

"Thank God," I replied, looking longingly at my bagel.

Clearly the conversation was not over, however, as she drew even closer toward me, and continued, "If you don't mind my asking, what is the doctor's prognosis?" Actually, I did mind. But all I said was, "They're very hopeful," and thought about coffee and mini-danishes.

"Yes," she went on, looking doleful, "that's what they say. But I've seen a lot of these cases, and I know there really is no reason to hope."

Through the years of coping with my son's illness, I've found that dealing with such trauma exposes you to the best of people, and to the worst. There are the kind, sensitive people who offer their prayers, walk the hospital corridors with you during critical times, and leave food on the doorstep. On the other hand, one also becomes victim to an unfathomable level of insensitivity which, no matter how well meant, is no less painful.

I tried to learn something from the "dumbest remark" award.

At the bris, the inquiry into my son's well-being was not the first instance of tactless behavior, and it prompted me, as I returned home to share with the other family members this winner of the "dumbest remark" award, to decide instead to draw some good out of this situation. Perhaps, I thought, I could help to create an awareness of how families facing traumatic situations would like others to react.

(1) The specifics of the medical situation are no one's business but the family's. No matter how good your intentions, and although you feel you are showing interest by inquiring into the details, there is no excuse for requesting an update on the particulars of the patient's condition -- certainly not for daily updates. If the family had something to share, they would mention it without being asked. Your job is to show concern. Beyond that, you've crossed the line into satisfying your own curiosity.

(2) Medical advice or anecdotes -- "my cousin's father-in-law had the same condition and he's fine now" -- even though meant as encouragement, are also inappropriate. It is highly unlikely that it was the "same thing," and it is probably by this time quite tiresome for the family to hear yet another "happy ending" that may or may not apply to their own situation. Thank you for the telephone number of the doctor who saved your cleaning lady's brother, but you can safely assume that the family has done much research and is aware of all the relevant aid. If, however, you feel certain that you have important information to contribute, call a close friend of the family and ask them to pass along the information at their discretion.

(3) The other extreme of behavior can also be very hurtful. When people who were your friends suddenly start tiptoeing around you in the supermarket, or cease to ever contact you, and you know that they're intentionally avoiding you, it adds another dimension to an already difficult situation. This is often due to fear of an inappropriate response, or a sense of guilt over the normalcy in their own lives. But whatever the case, avoidance is not the answer.

Beyond what not to do, there is a range of words and deeds that can actually help to alleviate matters.

(1) Carry on an ordinary conversation, prefaced by a general inquiry, "How are things?" Let the family member decide on the degree of detail of their response -- and follow their lead. It is appropriate to make some reference to what is clearly an all-encompassing part of their lives. "You are always in our thoughts and prayers" is an assurance that the family is happy to hear. Then, move on immediately to "normal" topics. You don't need to be embarrassed to discuss the rise in milk prices. We have interests beyond our "situation" and we're still interested in your life as well.

You don't need to feel guilty that your child is healthy. I want to know about your simchas (celebrations) and I want to be included in them. But if I cannot or choose not to attend, do not take offense. Invite me again the next time and let it be my decision.

Don't call half a dozen times asking, "What can I do?" Take the initiative instead.

(2) There are practical ways in which you can make a positive impact on a family's difficult circumstances. When you hear of a family dealing with a traumatic illness or other acute situation, don't call half a dozen times asking, "What can I do?" No matter how much they need, chances are they won't be able to think of an answer on the spot, and they don't need any additional interruptions.

Try this instead: Ring the doorbell, hand whoever answers a one-pan dinner that can be re-heated in the microwave, along with a little note that reads, "We're thinking of you." Then turn around and head right back to your car. You can rest assured that you have done something genuinely helpful.

(3) The written word is also a great way to empathize without being a burden on the family. Drop a note or send an email. They can read it at their convenience, and they'll be glad to know you care.

Having a friend in a traumatic situation presents its challenges. But your sensitivity can truly help. Show interest without being intrusive, extend assistance without being aggressive, show concern but not curiosity. Certainly the things you say come from the heart. But adding common sense to good intentions is the kindest act of all.

Ahava (Sperka) Ehrenpreis is a freelance writer and mother of eight who resides in New York City. She is the author of On My Own...But Not Alone (Artscroll Publications, 2019).

Looking at the Horror
The 21st President of the United States: Failure or Inspiration?
Hiding Their Jewishness
The Jewish Pope: Following the Questions Home
Comments