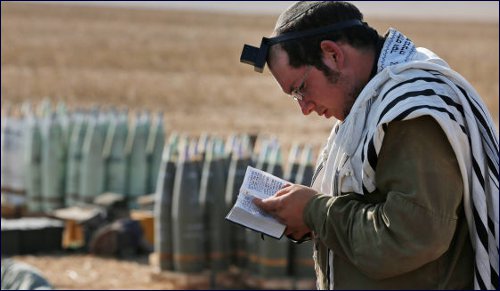 The Israeli army fights not out of hate for the enemy, but out of love for the Jewish nation.

The last words of Israel’s first fallen soldier in the current Gaza war reveal a lot. Sgt. Eitan Barak, 20, had a WhatsApp interchange with a buddy on Thursday night just minutes before he handed in his cellphone and marched into the terrorist nest of Gaza. 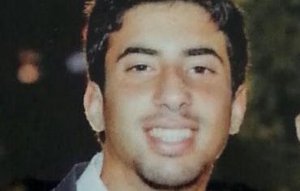 It’s reminiscent of Sgt. Dvir Emmanueloff, the first of the fallen in Israel’s first war with the Hamas terrorists in Gaza. Dvir’s father had died of cancer two and a half years previously. With three sisters, Dvir was the only son, and he worried about the anguish he would cause his mother if he too died in battle. He even went to talk to the widowed mother of a friend of his, trying to weigh his love for his mother against his passion to defend the beleaguered Jews of Israel’s South, constantly under a barrage of rockets fired from Gaza. Dvir had attended yeshiva high school in Netivot, in the South, and he loved the local populace who was constantly under attack.

When the war started, Dvir was in an officers’ training course and thus exempt from fighting. On Friday afternoon just before Israeli ground forces entered Gaza, Dvir phoned his mother and told her that he had opted to leave the course in order to join his infantry unit, massed on the border waiting for orders to attack. "Mom,” he told her, “I have to fight. I have to be there." Propelled by love, Dvir entered Gaza, where he was killed in combat several hours later.

Throughout military history, armies have been whipped up with hatred for the enemy in order to get them to face the frenzy and possible fatality of battle. The IDF espouses a different mentality. Despite ten wars against various Arab armies and militias, in its training the IDF never uses the word, “Arab.” Rather, the enemy is called, “the terrorists.” Rather than identify the enemies to our north as “the Syrians” or “the Lebanese,” IDF training uses impersonal geographical descriptions: “at the Syrian border,” or “at the Lebanese border.”

Contrast our approach with the Palestinians’. All the demonstrations against Israel’s defensive war—in France, England, Germany, and America—are filled with violence and vitriol. Official Palestinian education, not just in Hamas-controlled Gaza, but also in the supposedly more moderate Palestinian Authority, inculcates hatred for Jews in its Sesame Street TV series, its youth groups, and its military training camps.

Eighteen thousand Israeli soldiers amassed on the border of Gaza last week, waiting for the order to go in and clean out the thousands of smuggling and infiltration tunnels and launching pads of the Hamas terrorists. The Commander of Givati, one of the largest infantry divisions, sent this letter to his soldiers (roughly translated from the Hebrew):

It’s a big honor that fell to our portion to be and to serve in the unit of Givati at this time. History choose us to be at the tip of the spear of fighting the terrorist Gaza enemy that provoked and taunted the God of Israel’s battalions. [Here he uses terminology from the Biblical account of David fighting Goliath.]

We prepared and trained ourselves for this moment. And we accept upon ourselves the mission, as emissaries and from a place of total humility. We are willing to endanger ourselves and give up our lives for the sake of protecting our families and our nation and our heritage.

… I’m counting on you, on each and every one of you, that you will act in this spirit, the spirit of Israeli warriors, who are going in the forefront of the fighting forces, … I raise my eyes to the heavens and call out with you, “Shema Yisrael, Hashem Elokenu, Hashem Echad.” Hashem, the God of Israel, please make our way successful, that we are going and standing to fight for Your nation of Israel against an enemy that taunts Your name. In the name of the IDF fighters and particularly the fighters of this division and its commanders, it should be that what it says in the Torah should be fulfilled by us: “Because God your Lord Who is going with you to fight for you against your enemies, to redeem you.” And let us say, “Amen.”

“Together, and only together, we will win.”

The love and support of Jews and non-Jews throughout the world is manifesting in a dozen initiatives to support our soldiers. One of them is “Or L’Hayil,” a Chabad organization that helps soldiers throughout the year. It started when its founder Mendy Ofik and his brother Shmuel were on their way to Hebron five years ago to distribute Purim treats to the soldiers stationed there. An Arab ambush attacked their car with automatic rifle fire. A bullet went into Shmuel’s neck, came out the other side, and hit Mendy. As an ambulance rushed them to the hospital, Mendy vowed that if he survived, he would devote his life to Israel’s soldiers. Both Mendy and Shmuel are tireless and fearless workers in the service of Israel’s conscripts.

Love propels our soldiers into Gaza, where hatred lies in wait.

When the order was issued Thursday night to invade Gaza, Mendy was standing there at the gate cut out of the border fence. He led the troops in reciting Shema Yisrael as they passed, brigade by brigade, into the darkness of Gaza. He and Shmuel also distributed tzitzis to any soldier who wanted them. Although the thin, cotton garments with fringes on each of its four corners certainly don’t resemble protective armor, many soldiers request them in order to be protected by the mitzvah.

Thank Israeli Soldiers has delivered to the soldiers over 4200 “care packages” containing socks, underwear, t-shirts and baby wipes. Because there is no place to shower or get clean clothes on the border throughout the many days of waiting in sweltering heat, the soldiers especially appreciate these baby wipes and clothes. Last Friday, more than 2000 packages of Shabbat hallahs, bottles of grape juice, and humus were delivered, plus 1200 kilos of regulah and cookies, bought in bakeries in the South that are suffering financially from the war. As Emanuel, the organization’s representative, was delivering the trays of baked goods on Friday, he spotted a line of tanks preparing to go into Gaza. He gave each tank two trays, to the delight of the soldiers who were happy to have a taste of Shabbat as their tanks rolled into the war zone.

A letter from the specific donor accompanies each care package. As the director Mimi Jankovits explains, “The letters of support and love are an essential part of the package. Soldiers tell us they take them into battle with them. Bringing together people from around the world with Israeli soldiers helps create a bond and a spiritual shield to protect us all.” 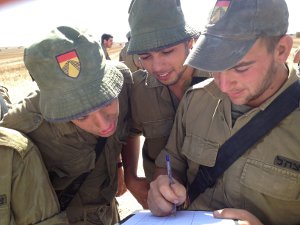 Soldiers giving their names for the Shmira Project

Another organization to benefit the soldiers is “Project Shmira [Protection].” Project Shmira, endorsed by leading rabbis, pairs volunteers from all over the world with Israeli combat soldiers going into Gaza. Each volunteer receives the first name and mother’s name of a soldier, which is the way Jews pray for individuals. In the first hours of the Gaza invasion, Project Shmira was receiving one thousand requests per hour, from places as far flung as Uganda, Iceland, and the Far East.

Yaakov G., founder of Project Shmira, was collecting soldiers’ names at the Gaza border on Friday. Amidst periodic mortar fire from Hamas, Yaakov handed around clipboards for soldiers to fill in their names. Such volunteering requires enough love to vanquish fear. Israel’s first civilian fatality was Dror Chanin, a volunteer who had come to the border last week to distribute food packages to soldiers, and was killed by a mortar shell.

Yaakov also led many soldiers in saying Shema. This credo of the Jewish faith is supposed to be said daily, every morning and night, and a custom dating back to Rabbi Akiva, 2,000 years ago, has Jews also saying Shema at the time of death.

The young soldiers reciting Shema on their way into Gaza have no way of knowing if it’s the daily Shema or the death-time Shema. One soldier handed Yaakov G. a small black notebook and requested, “If I don’t come out, please give this notebook to my family in Jerusalem.”

Love propels our soldiers into Gaza, where hatred lies in wait.