I’m Going Out of My Mind 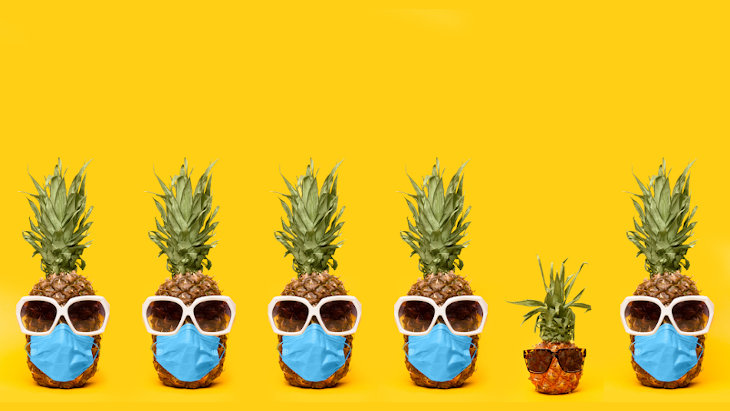 I realize I have it lucky, but the pandemic is still putting me over the edge.

I seem to be channeling an old Animals song these days: “We’ve gotta get out of this place. If it’s the last thing we ever do…” Given the current upheaval in the streets of America, you might assume that’s what I’m referring to. But it’s actually more personal and localized. I’ve gotta get out of my house! Away from the same furniture and chores and dust and dinners and…

I’m going out of my mind. And I know I’m not alone. I think more than half the country, perhaps half the world has joined me in my frustration. Despite the lack of a cure or a vaccine, enough seems enough. It’s not rational or logical or perhaps even sane! I’ve been so careful and I’m getting ready to just open the doors wide – because I’m going out of my mind.

I realize I have it lucky. I have a house. It’s been nice weather. I have a job. I have a backyard. I have some grandkids close by who are sheltering with us. I have my husband and two children who are stuck at home too (and also, dangerously close to going out of their minds!). I have classes to teach and articles to write and all sorts of meaningful work to do. I really can’t complain. And yet…I’m going out of my mind!

Of course, we can put up with more. I think of Natan Scharansky spending years of solitary confinement in a KGB prison. I think of the small hiding places that Jews squeezed into during the Holocaust – living off scraps and afraid to make a peep. I think of innocent people jailed for years for crimes they didn’t commit – and even the guilty ones. There are so many people, both now and in the past, who were trapped in much worse conditions with much less hope of freedom or escape. But I’m still going out of my mind!

And, paradoxically, I’m also trapped by my fear – afraid to venture out, afraid to expose myself, just plain afraid. Every other human being becomes a potential disease-carrier. We instinctively move in for a hug and just as quickly recoil in disgust. At a doctor’s visit (my only outings) recently, the ungloved nurse tried to hand me a pen. I jumped backwards without thinking and she proceeded to put on gloves and wipe down the pen. Maybe she should have had them on to begin with – or maybe she was washing her hands non-stop and didn’t need them – either way, I don’t like the distrust, the uneasiness we all feel around each other, the constant calculations.

We don’t see a lot of people, but we indulge in the occasional social distance visit because…you guessed it…I’m going out of my mind! On a recent one, a friend who claimed to also adhere to a rigid standard in the wake of the virus, began listing all the people she had seen recently and, more importantly, the circumstances. I found myself inching backward in my chair as the list got longer and longer. I no longer feel comfortable around her and that’s sad.

I know that the Almighty runs the world and that if we’re meant to get sick, God forbid, nothing we do will prevent it. But on the other hand, we’re supposed to make a reasonable effort and not rely on the miracle. I think I know what reason would dictate but should reason also take into account the fact that I’m going out of mind?

I think it should. It’s only a question of how much weight to give it. I think the country is engaged in an evaluation of that balance right now. Because there seems to be a collective call of “we’re going out of our minds” and the governmental policies must respond to this sentiment/need as well.

I hope we’ll achieve a thoughtful balance (Is it a situation where the idea of a happy medium can even be applied? Can we use the word happy?!). I hope I’ll achieve a thoughtful balance (I hope we’ll discover a vaccine sooner than imagined!). A physician friend of ours said he doesn’t plan to get on a plane until at least January. That sent me back down the rabbit hole of despair. “But he doesn’t have grandchildren who live 3000 miles away,” I said to myself. He has his whole family together. Maybe he’d make a different choice if he didn’t. I don’t know. Maybe I don’t need to be swayed by his choices. There are doctors on all sides of this issue…

All I know is that I’m going out of my mind! And that I’m intensifying my prayers that the Almighty lift this plague and allow us to return to a life of connection and togetherness (and even painted nails!) as opposed to the isolation and distance (and rough cuticles – trivial but hey...) we’re experiencing now.

Getting the Ear of the President
Korach 5782: Visit to Lift the Spirit
That Time The Ivy League Found A Way To Limit Jewish Enrollment
Would You Rather Be Right or Happy?
Comments
MOST POPULAR IN Family
Our privacy policy