Q&A for Teens: I Don’t Measure Up 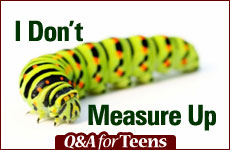 I’m not really good at anything and I don’t think there’s anything to do about it.

My sister is a really great piano player. My brother’s a math whiz. My parents are both really good at their jobs—and then there’s just plain old me. I just don’t measure up, and I don’t think there’s anything to do about it.

I know you feel inadequate, but I promise you that you are made exactly as you’re supposed to be to fit into the large, complex, multifaceted jigsaw puzzle of life. I recently bought a gorgeous book published by Smithsonian: The Ultimate Guide to Everything on Earth. It has incredible pictures and short descriptions of every plant, animal, protist, prokaryote, rock, mineral, and even fungus, on Earth. As I looked through it and saw the millions of species and variations of entities in our world, I was powerfully reminded that everything has a place, and everything is needed.

Did you ever hear the famous true story about the Lincoln Memorial? The Lincoln Memorial was absolutely filthy. Honest Abe looked dirtier than the meanest criminal around. What was sullying the statue? Well, it started with the midges. Midges are tiny flying insects. They loved the lights on the Lincoln Memorial and flocked to it in great swarms. Because of the plentiful midges, spiders arrived to feast on them. And then multitudes of birds came—you got it—to eat all those delectable spiders. The midges were smashing against the memorial, making it dirty with their corpses, the spiders were leaving their webs everywhere, and the birds were pooping all over the sixteenth president of the United States. It was a presidential mess.

So guess what happened? Some smart person in Washington realized that the midges were only coming because of the lights, and that they swarmed for about an hour after sunset. So the National Park Service turned the illuminating lights on an hour after sunset instead of just at sunset, and 90% of the midges stopped flocking there, which made 90% of the spiders go away, which made 90% of the birds take their defecation elsewhere. My point is this: every thing, even a little thing, makes a big difference. Who would have thought that tiny, flying insects could have such influence?

It’s like Darwin and his earthworms. (Did you notice we’re going with the naturalist theme today? Must be the beauty of the springtime giving me inspiration!) Darwin wrote a short book in 1881 entitled, The Formation of Vegetable Mould Through the Action of Worms, With Observations on Their Habits. It initially sold even more copies than his most famous, influential work On the Origin of Species by Means of Natural Selection. He described how earthworms aerate the soil and make it suitable for planting life-sustaining crops by eating the dirt and then excreting it, now nutrient-rich from being in the worm’s body. Darwin wrote: “It may be doubted whether there are many other animals which have played so important a part in the history of the world, as have these lowly organized creatures.”

Related Article: A Lesson in Self Esteem

The New York Graphic, in 1881, summarized the book: “The result of the author's observations is the production of proof that the small and apparently insignificant earth-worm is the cause of mighty changes in the surface of the earth, seeing that each of them, on the average, passes about 20 ounces of earth through its body every year, which earth it brings often from a depth of eight or ten feet below the surface to deposit it on the mould at the top, thus doing the work of a plow…. An average of 30,000 such “plows” are at work in every acre of common arable land, and, therefore, the worms work over…ten tons of earth per acre every year.”

I bemoan the fact that you don’t believe how important and powerful you are.

Ten tons of earth per acre every year! By the “lowly” earthworm?! Darwin bemoaned the fact that people wouldn’t believe that such a small creature could engender such tremendous accomplishment. And I bemoan the fact that you don’t believe how important and powerful you are.

On a recent wet, drizzly, gray morning, my 6-year-old daughter and I were walking to the bus stop when she stopped short on the sidewalk and exclaimed, in utter disgust, “EWWWWWWW! A worm!!” Now you can understand the answer I said to her. I said, “That worm is the reason we have apples.” Every piece of Earth—including every person—is an integral, important part of the magnificent workings of our world. God placed every entity here on purpose to do its part in the physical and spiritual big picture.

One addendum about worms: If you cut a worm in half, it can regenerate itself. If you feel like a worm, then congratulations! Not only are you are powerful beyond the measure of your physical being, but you also can reinvent yourself incredibly! What I mean is this: if you don’t feel special “just as you,” then I challenge that assessment of yourself, as I’ve written extensively here. You are important just as you are. However, in addition to feeling good about yourself just as God made you, if you want to find some arena of expertise that you enjoy and are good at, by all means, find one!

But don’t feel rushed to do it, because you just being you is good enough. If you want to find an area of specialization, give it time. Over the course of your life, you will find your niche.

How Can I Make the World a Better Place?

Q&A for Teens: Should I Conform?

Intruder in My Social Group

The Four Rules to Get Along with Other People

Q& A for Teens: Too Thin
The Power Of Prayer
Va’etchanan 5782: A for Effort
Can You Show Me This "God?"
Comments
MOST POPULAR IN Current Issues
Our privacy policy
Aish.com Is Looking for Great Writers