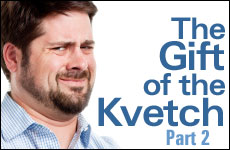 Confessions from a creative kvetcher.

In Part One, we talked about the Positive Value of Kvetching. For over 3500 years, We Jews have perfected the art, which is not only how we’ve remained sane when Cossacks were chasing us, but is also the reason there are more Jewish shrinks than Jewish serial killers (David Berkowitz, the Son of Sam, was adopted.)

Each of us has our very own list of personal “kvetchables.”

In fact, if you look at the number of famous Jewish shrinks -- Freud, Adler, Fromm, for example, what did they do? They turned kvetching into a profession: “Lie on the couch and tell me your tsouris. I’ll not only listen, I won’t say a word. That’ll be $500.” Of course we Jewish mothers not only do it for free, we’d pay people to take up residence on the sofa … provided they take their shoes off.

Each of us has our very own style and list of personal “kvetchables.” Not all of mine are yours and vice versa. I’ve been known to have a few quirks, for example … the banana. After bunching around for years, mushy and juiceless with strings, it still doesn’t know what it wants to be; a fact I find unsettling. A fruit? Vegetable? Mucous? I’ll prove it. Show me one person whoever said, “Oy, I’m dying for a refreshing banana!”

Fruit in general scares me. Who among us hasn’t sunk our teeth into a nectarine, only to have our eyebrows stand up at right angles? I figure there are enough sour surprises and mysteries in life. Do I need this from a nectarine? (I know -- Quirky.)

That said, I’ve created a list of some of my other eccentric kvetchables, for example, waiting for a real human on the phone who speaks a language other than Kurdish, figuring out your “package” Internet bill, getting that “glue factory” look when you ask anyone under 40 why your computer, phone, and TV are exploding. These things deserve a good whine, complaint, and of course, our very best Yiddish curses.

FOUR OF MY MORE ECCENTRIC KVETCHABLES

Forks, The New Socks: No matter how many forks I buy, I always seem to have two. Like the famous escaping socks in dryers, dishwashers have joined the union. I put 10 forks in and get two back. My dishwasher handles 200 mismatched spoons and knives, no problem. But my forks? They’ve either tined their way to liberty through the sewer system, or are being sold at a garage sale in Brooklyn.

Whenever I need a mattress, I kvetch and pooh on the ad people. There’s “firm,” “firmer,” “super firm,” “ultra firm.” Do I know the difference? Do you? How about a little “truth in labeling?” I finally learned the very hard way that “firm” means “better you should put two chairs together and hire a chiropractor.” “Firmer?” They’ll throw in an Army mat.” “Super firm?” You might not need a neck brace. “Ultra firm?” Instead of wasting gelt on a chiropractor, buy their “Magic Mattress Pad ‘n Pillow” by phoning the number on their infomercial. Well, imagine my kvetch when the most intimate of items – TP (toilet paper) went the way of the mattress. One famous company now offers: “Basic,” “Double Basic,” and “Ultra Strong.”. I’ll refrain from “defining” Basic but Styrofoam and sandpaper comes to mind. Stick with the Double Basic … unless it means you get twice the Styrofoam.

Smart Phones, iPads, and other impolite “I” am not looking where I’m going gadgets; Walk anywhere, and you’ll see a sea of humanoids communing with their palms. During job interviews they’re playing Who Wants to be A Millionaire? If they looked up at the recruiter they might actually get to play “Who Wants to be Employed?” Not only is your kidney operation back-burnered to palms busily winning Angry Birds, but the “palmers” walk like hunchbacks, narrowly avoiding 18-wheelers. I’m telling you, if you looked in Hoover Dam, you’d find 100 floating JYA’s (Jewish Young Adults) staring at their wrinkled palms trying to access MapQuest.

Pesto is a kvetchie pest. Let’s be honest. Does anyone really pine for a sauce that looks and tastes like acne ointment? Then there’s “chipotle.” I refuse to eat something I have no clue: a) how to pronounce (what? “Chipottel,” “chipotley?”), b) about what it is – or why it’s invaded our nation like the kvetching Kardashians. Then of course there’s the most infamous lying food – “White chocolate.” Except for a hint of cocoa butter, this is to chocolate like Manischewitz is to Ripple. Worse, one sickeningly sweet bite, and you risk either diabetes or dissolving a tooth. Yet, The Iron Chef has the chutzpah to put it next to the so-good bittersweet and milk as their “Mystery food!” I ask you, what hope do we have for a world that lies about chocolate? (I know, I’m kvetching.)

Did Jews Kill Bin Laden?
It Takes A Lot Of Faith To Be An Atheist
How Instagram Brought Back This Nostalgic Soup
What Makes Eli Run?
Comments
MOST POPULAR IN Jewlarious
Our privacy policy