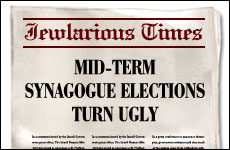 Incumbent at risk of losing his seat due to unpopular Kiddush policies.

JEWLARIOUS SATIRE: Apple Hill, NY -- Larry Kaplan is a man on a mission. After years of denouncing the current administration as broken and complaining about what he views as a bankrupt bureaucracy, he decided to run for office.

Kaplan describes himself as an independent thinker, an outsider running against politics as usual and the pork barrel policies of the current administration. He launched his campaign based on the issues of fiscal responsibility, the environment, balancing the budget and education. Kaplan is running for President of the Beth El Synagogue, in Silver Plains, New Jersey.

"I'm a fiscal conservative, who can balance the budget and still deliver a decent Kiddush. I stand for paying wholesale -- enough of these retail prices! Who pays $40 for lox and $25 for melon? I'm a meat and potatoes man, vote for Kaplan and the shul will have chulent at every Kiddush," said Kaplan.

Synagogue pundits are calling the Beth El Presidential election one of the most contentious campaigns this political season as Kaplan tries to unseat President Mark Greenbaum. Seeking a second term, Greenbaum won his first election by the slimmest of margins. His meteoric rise from the synagogue's compassionate Candy Man to President has been described by some as miraculous, while others have questioned his mandate because of the narrow majority on which it is based. Greenbaum critics say he should be more accommodating rather than adapting the bellicose tone for which he has now become famous. Since taking office Greenbaum has focused on security issues around the synagogue and has insisted that he be referred to as the "Commander-in-Chief."

President Greenbaum, for his part, portrays Kaplan as an out-of-touch disgruntled congregant who spends too much time complaining about who gets what honor in services. Greenbaum also cautions members that they should beware of Kaplan's "overtly liberal chulent policies." "I'm a uniter, not a divider," said Greenbaum. "The synagogue needs to stay the course. We are making a difference in the community and we are winning the war against assimilation."

The synagogue needs to stay the course. We are making a difference in the community and we are winning the war against assimilation."

"I believe the children are our future. Teach them well and let them lead the way," Greenbaum recently declared while reading the Shabbat morning announcements. "If re-elected, I promise that no child will be left behind when it comes to Jewish education whether it be day school or Hebrew school."

One of the more controversial issues being debated during this campaign is a proposal to ban all illegal aliens (i.e. non-members) from attending services. "Members need to know that when they come to services their seat will be waiting for them," said Greenbaum. In response Kaplan argued, "Our synagogue should be open to all comers just like Abraham's tent. I say, ask not what your shul can do for you but what you can do for your shul."

With the elections fast approaching both campaigns are expected to launch a new wave of negative attack advertisements on local radio and television stations. 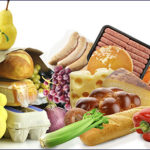 Armed, But Not Dangerous6 min read

Fiddler on the Roof: New and Improved?6 min read

Moishe and Me6 min read

Be My CyberFriend5 min read