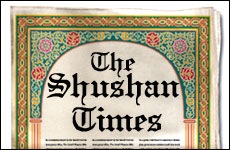 Persia – After years of warfare King Achashverosh declared victory in the war on terror. Wearing his old Zoroastrian Guard uniform he drove his chariot out to greet the returning troops proclaiming, "Mission Accomplished," and stating emphatically, "Our nation will not be intimidated by Phoenician extremists." Operation Peace for Persia has brought calm to the world and expanded Achashverosh's rule to 127 provinces from Africa to the Middle East to Asia. The King said, "We have fought hard and defeated an axis of evil nations, so that we can now live free, under my totalitarian rule."

Persia – Last night King Achashverosh announced he was divorcing Queen Vashti Fedeloush citing irreconcilable differences. Queen Vashti was not available for comment and sources close to Achashverosh say that she totally lost her head. Royal watchers noted that the King and Queen had not been seen in public together in several days and in particular, that Vashti did not attend the "Mission Accomplished" party. A friend of the Queen said she was stunned and shocked, "I can't believe he dumped V-Fed by text message -- a papyrus text."

Persia – Miss Shushan, Esther Hadassah, beat out 127 other beautiful women to become Miss Persia 2007 and the new wife of King Achashverosh. Brushing back tears, Esther said, "I have watched the Miss Persia contest since I was a little girl and it has always been my dream to wear that beautiful crown." When asked about the upcoming wedding, King Achashverosh said, "I know people think this is very rushed but I love her, I love her, I love her," and proceeded to jump up and down on his couch. Miss Shushan will succeed last year's winner, Miss Hodu, whose reign was marked with scandal after checking into rehab for a Frankincense abuse problem.

Persia – Bigtan and Teresh, two palace guards were arrested last night on charges of treason for plotting to assassinate King Achashverosh. The scheme was uncovered by Mordechai Ben Yair who overheard the conspiracy while sitting in the King's gate. CSI teams from Miandoab, Langaroud, and New Najafabad all corroborated the report and Bigtan and Teresh are expected to be hanged this morning.

Persia – In a move to shake up the palace cabinet and reinvigorate his domestic policies, King Achashverosh tapped Haman to be his new Viceroy. Haman is credited with engineering the successful Achashverosh "Compassionate Conservative King" campaign across the kingdom. In the wake of King's Gate-gate, Achashverosh has placed Haman in charge of homeland security, the defense department and national security. Royal watchers fear that the promotion and power has already gone to Haman's head. Reports from the King's gate say that he tried to force Mordechai Ben Yair to audition for the hit series "Persian Idol," which requires contestants to bow down to the show's only judge -- Haman. When Mordechai refused, Haman shouted, "Do you have any idea who I am?! You are never going to work in this town again!"

Persia – Reports of a national lottery had people throughout the empire wondering if the now defunct Baharestan Bingo, Jackpot in Javanroud, or PowerBall would be resurrected. However, palace sources report that Haman's lottery is not a sweepstakes but a system for instituting his plan to kill all of the Jews. Haman's media spokesperson Borat Sagdiyev said, "I am wanting to use the Jewish as the ping pong balls in lottery but they will be not cooperate. So we choose 13th of Adar and we will killing them." Haman has ordered the Homeland Security Department to begin preparations by having gallows built in every town square. Jews reacted to the news initially with shock but then began a hunger strike protest at the King's gate. One of the group's leaders, Mordechai Beni Yair, ripped his garments, put on sackcloth and ash and said, "Can't we all just get a long?"

Persia – King Achashverosh announced today that he was launching a new reality show called King for a Day. "The other night I could not sleep and was reminded of King's Gate-gate. Mordechai Ben Yair performed a brave and heroic act that deserves to be rewarded and honored. Mordechai, come on down, you're the winner of King for Day!" The honor includes a parade around the city square wearing the King's royal robe, riding the King's horse, and wearing a royal crown while being led by a noble officer. "Wow, at first I thought I must be hallucinating from the hunger strike," said Mordechai in an interview with Rajoudi Reality TV news. "I thought, this couldn't be happening in The Real World. But what can I say -- I'm experiencing an Amazing Race of emotions. I've gone from The Biggest Loser marked for death to The Survivor who is King for a Day. Producers of the show have cast Haman to lead Mordechai through the streets, as they feel the dramatic technique will increase viewership -- which is carefully being scrutinized during sweeps week.

Persia – In a startling turn of events King Achashverosh announced that he has fired Haman and sentenced him, his family and his dog to death. Palace sources report that at a dinner party last night Queen Esther outed herself as a Jew and explain to the King that Haman sentenced her to death. Achashverosh ordered Haman to hang from the gallows and promoted Mordechai Ben Yair to Viceroy. In a press conference following the proclamation Mordechai said, "I want to thank the Academy, King Achashverosh, Queen Esther and most of all God for his support in seeing us through this dark time." As news of Haman's firing and impending death spread, Jews began celebrating in the street, handing money out to poor people, exchange sweet treats and eating triangle cookies with filling. Rumor has it that there are plans to make this an annual celebration.

Boo!
Should I Break Up, Get Engaged or Keep Dating?
Time Is Your Precious Commodity
A Constant World in Flux
Comments
MOST POPULAR IN Jewlarious
Our privacy policy