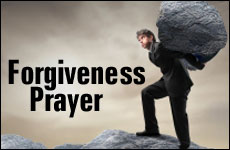 Tools for dropping the toxic baggage.

Letting go of a hurt can be hard. When feeling wronged it’s natural to want the perpetrator to be punished, or at least to apologize and acknowledge what they did wrong. When no apology is forthcoming, we often bear a grudge and end up being the ones who are suffering.

To help us put down our toxic baggage, the Sages, with their profound understanding of human nature, instituted a special forgiveness prayer to be said before going to bed.

In this prayer, which can be found in the Siddur, we proclaim:

Forgiveness does not mean that we condone what has been done, or that we necessarily reconcile with the person who hurt us. Sometimes this is not in our best interests. What it means is that we let go of being stuck in our own negative emotions and the wishing for whoever hurt us to be punished.

This is much easier said than done. Here are five powerful strategies that can help us let go more easily:

2. Finding meaning – One of the basic tenets of Judaism is that there is a reason for everything. Oftentimes, the life lessons that are most precious come at the greatest cost. While we would not choose to be hurt, we often learn the most about our resilience, our strengths, and what really matters to us specifically from those events that are really hard. By appreciating what we may have gained in growth, it may become easier to let go of the negativity that brought us to where we are now in our understanding of life.

3. Judgment – Realize that when we feel wronged it has a lot to do with how we perceive the actions and motives of another person. The Sages teach that we should not judge a person until we have walked in their shoes, partly because of the difficulty of judging accurately.1We need to ask ourselves if our reading of the situation is completely accurate. Perhaps things are not exactly as we imagine them to be, and even if they are, can we really understand everything that brought another to behave as they did. Do we have in front of us all the different pieces that contributed to the puzzle of that person, at that time? When we consider a bigger picture and our own limitations of grasping it, this may soften our stance and make it easier to forgive.

4. The Golden Rule – Everyone makes mistakes, including us, and the same way that we would want others to forgive us for our offences we should likewise be willing to extend forgiveness to others. We are not able to control anyone else’s behavior except for our own and we cannot make anyone own up to something they do not want to. But we can choose to take a higher road and be willing to forgive even if no apology is forthcoming.

5. Forgive Yourself – How we relate to others, and how we relate to ourselves, is often two sides of the same coin. Sometimes the hardest person to forgive is the one who looks back at us from the mirror. Whether it is for opportunities missed, mistakes made, or perceived imperfections we sometimes carry a grudge against ourselves. As a result, we may suffer feelings of low self-esteem and a host of other negative emotions. When we are more willing to forgive ourselves this can open the door to forgiving others a bit more easily. The Torah famously states that we should love our neighbor as we love ourselves. This implies that our ability to love others is based on our ability to love ourselves. Forgiving ourselves is a good place to start.

There is an amazing story about Rabbi Yisrael Salanter, the founder of the Mussar movement, that highlights the value of forgiveness. Rabbi Salanter was once traveling on a train with a young man who didn’t recognizing him, and the young traveler was incredibly rude and insulting. When they reached their destination, the young man saw the huge welcoming party that had gathered to greet his traveling companion, Rabbi Yisrael Salanter. He was horrified when he realized whom he had insulted.

He found out where Rabbi Salanter was staying and went to ask his forgiveness. Rabbi Salanter received him warmly and asked him about the nature of his trip. He replied that he came to be tested as a shochet (a ritual slaughterer). Rabbi Salanter sent him to a relative of his, who was a prominent Rabbi in the town, to be examined. The young man’s proficiency was found to be quite lacking. Rabbi Salanter hired an expert shochet to teach the young man, at his own great expense, until the young man was able to receive the certification he desired.

Rabbi Salanter was asked why he went to such lengths to help this young man, whom he hardly even knew. He replied that when he was traveling with him, he had been insulted. Although he had forgiven the young man immediately, he was concerned that perhaps his forgiveness had been incomplete, and that he had held on to a vestige of resentment. In order to counteract this, he went out of his way to act in kindness to the young man, to eradicate any ill will he may have felt toward him.

If Rabbi Salanter was willing to pay so much, he must have deemed the expense of holding on to any resentment as being even greater.

Saying the forgiveness prayer allows us to put negativity behind us at the end of each day, going to sleep with a clear mind and heart. Try reciting it each night. You’ll be amazed at the difference it makes.

Rabbi Benjamin Rapaport, M.Sc., lives with his family in Jerusalem, where he works with individuals and groups, in person and by skype, to help them actualize their strengths to accomplish personal and professional goals. He is the author of The Jewish Art of Self-Discovery, available on Amazon. For more, see: benjaminrapaport.com

Kate Spade and Anthony Bourdain: Taking It to Heart

Daring Rescue in the Thailand Cave

The Cancer of Anti-Semitism in Europe
What Makes Eli Run?
The Tyranny of Materialism
Science Enters the Mysterious Inner World of Consciousness
Comments
MOST POPULAR IN Current Issues
Our privacy policy